By Adrienne Coffey and Danielle Manning 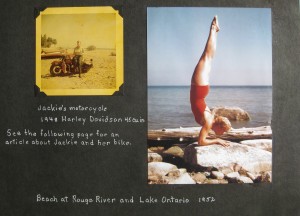 Jackie MacDonald is an athlete who gives Canadians good reason to be proud of their sports heritage. She has competed in a multitude of sports, first attracting attention as the star player on a Toronto city league basketball team that won two Junior National Championships. She has also participated in competitive swimming and diving, followed by a prestigious career in shot put and discus during the 1950s, when she represented Canada in international events, including the 1954 Commonwealth Games, the 1955 Pan American Games, the 1956 Olympics, the 1957 World Youth Games, and the 1958 Commonwealth Games. Jackie ranked first in the Western Hemisphere and second in the Commonwealth for shot put in 1954 and 1955. By 1956, she was ranked 26th in the world.

Her athletic achievements between 1947 and 1958, as well as those of her fellow athletes, are documented in a series of scrapbooks (Fonds 4662), which Jackie donated to the Archives of Ontario in 2012. These scrapbooks tell a compelling story of the history of amateur sport in Canada—particularly the challenges and accomplishments of female athletes at this time. Jackie is now over 80 years old and is still active, setting records with the Ottawa Bicycle Club. Her story is one of passion and inspiration. With 2015 being the “Year of Sport” in Canada, and with the upcoming Pan Am / Parapan Am Games coming to Toronto this summer, Archivist Adrienne Coffey and Outreach Officer Danielle Manning from the Archives of Ontario connected with Jackie to find out more about her personal experiences as an amateur Canadian athlete and as a donor of archival records.

A & D: There has been (and continues to be) a lot of anticipation for the upcoming Pan Am / Parapan Am Games in Toronto this summer. Could you tell us about your experience as an athlete competing in the discus throw at the 1955 Pan Am Games in Mexico?

A & D: What are some of the major changes you’ve witnessed in the field of amateur sport in Canada from the 1950s, when you were competing, to today?In particular, how has support for women in this field changed, and what advancements or improvements would you still like to see?

Jackie: I have seen enormous changes in amateur sport, especially in relation to women’s sport.
I attended high school in Toronto in the late 1940s. It was a very bad time and place for an athletic girl to be growing up. From what I was told, conditions had been better in the 1930s with more encouragement and financial help available. Probably two factors contributed to the decline: the Second World War and, especially for girls, a powerful influence from an American movement that was very opposed to girls exerting themselves too much and competing seriously. Because of the war many things were cancelled, including sports programs (not only for women). 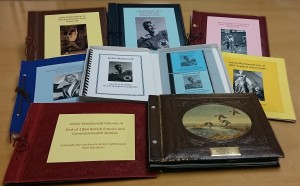 Jackie MacDonald fonds (F 4662) at the Archives of Ontario.

Then, at the end of the war, when men returned and many women gave up the jobs they had been doing during the war, there was an expectation that they would return to their previous feminine roles. The idea that strenuous activities could affect women’s femininity and even their reproductive organs was still floating around. The Women’s Division of the National Amateur Athletic Federation of the United States believed that girls and women should only be coached by women. They were also adamantly opposed to all forms of competition in women’s sport (for example, they lobbied against the inclusion of women’s events in the 1932 Olympics). Friendly participation was okay, but they seemed to think that high level competition for women wasn’t suitable, either psychologically or physically.

Unfortunately, this philosophy spread to Canada, especially Eastern Canada and specifically to the high school I attended in Toronto. Examples of this are “girls’ rules” basketball, special volleyball rules, and the fact that we never had any interschool competition. Nor did we have a wide range of sports – certainly no track and field. Apparently the influence of this group did not reach Western Canada. I have spoken to people from there who said that girls had far more sports than we did. Fortunately, as you can see in the first volume of my scrapbooks, there was a very good women’s basketball league in Toronto when I was young.

When I was competing, there was very little financial support to travel to meets. In many places there were few, if any, facilities. For instance, I never had circles from which to put the shot or throw the discus. Coaching was all amateur, although some of it was good. My only coach, Lloyd Percival, who was excellent, quit coaching after the 1954 British Empire and Commonwealth Games and I didn’t have a coach after that. Many male athletes got sports scholarships to American universities, but not all of these had great programs. Things really didn’t improve for female athletes until the 1970s – the third wave of feminism. Yet, the feminist movement has been criticized for being slow to promote opportunities for women. While there are many more sports and events available for women today, there are still others that haven’t opened up. Think of the fight to get women’s ski jumping into the Olympics.

A & D: You’re very inspiring as someone who is now over 80 and still very active, competing in the Women’s Time Trials and setting records with the Ottawa Bicycle Club. What advice can you give to people about how to stay fit?

Jackie: Staying fit is important for everyone, but there is more and more publicity these days about its importance for older people and more and more programs for them. I would advise people to investigate what is available in their neighbourhood, but also to try to learn about what they are doing. You might be interested in a short interview featuring my husband and I, which aired last summer on CTV News Ottawa. The video segment showcases our current fitness regimen, and commitment to staying active.

At present I do spinning classes during the cold weather and cycling outdoors when it is warmer. I do weight training to try to retain as much strength as possible and lots of stretching. Here is a funny story about the latter. I was getting dressed one day in the dressing room at the recreation centre when another older women commented, “You can still do up your bra by reaching around behind.” I replied yes, but that I worked on it. She looked puzzled and I later realized that I should have explained to her that I did lots of stretching (not just to be able to fasten my bra). I do some very specific stretches. After attending two 80-plus driver sessions, I am very conscious about how my age can affect driving safely. With arthritis in my neck, I do exercises turning my head in both directions – sitting up as though driving a car and leaning forward as though I were riding my bicycle.

Jackie: I don’t quite remember when I started the first scrapbook, but it was probably when I was playing basketball in the Toronto and District Women’s Basketball League starting in 1947. Our games were always reported in the newspapers and because I was a good player I often had my name in the accounts of the games. So, eventually, I started to paste some of the clippings into a photo album (Volume I, The Early Years).

Next, in 1954 at the Commonwealth Games, I continued clipping newspaper photos and articles, about me of course, but also about athletes from other countries because I found them so fascinating. This continued for the other games in which I participated.

It wasn’t until 2000 when Ann Hall came to interview me for a book she was writing The Girl and the Game: A History of Women’s Sport in Canada that I had any idea that my scrapbooks might be of interest to anyone but me. Ann and I looked at them together and she told me that I should leave them to a sports hall of fame. I was very surprised, but added a note to this effect in the addendum to my will.

As I worked on restoring the scrapbooks, I started to understand their historical value. At that point, I started adding comments, explanations and some references in the hope that they would be useful to future researchers.

A & D: Before donating your scrapbooks to the Archives of Ontario, you restored the condition of your records, added commentary to many of the articles, and created a finding aid to assist researchers. You also created digital copies of the scrapbook pages on DVD for a number of institutions worldwide, including the Archives of Ontario. Did you find it difficult to let go of these records that you personally assembled?

Jackie: Did I/we (my husband was very involved in the upgrading of my scrapbooks) find it difficult to let go of “these records”? Did we ever! It was like letting go of my baby. But here is what made it easier. When I started talking about donating the scrapbooks to the Archives, my sister-in-law in Victoria said, “I want to see them.” There was no chance of that, so I decided to have copies made. I bought a small tripod, which I set up on the coffee table in the living room to photograph all 280 pages, including the text files. The digital copies don’t have the same appeal as the originals, but I was able to send a copy to my sister-in-law, and keep a copy for myself and my husband.

You can view selections from the scrapbooks at the Archives of Ontario as part of its “Spirit of Sport: The Legacy of Jackie MacDonald” exhibit, which will run during its Doors Open Toronto event on May 23rd and during the Pan Am/Parapan Am Games.

Danielle Manning has worked at the Archives of Ontario for over two years, first as an archivist and now as an Outreach Officer. She is currently responsible for the Archives’ tour program, social media accounts, and Speakers Bureau presentations. Danielle holds a Master of Information from the University of Toronto and a Masters degree in art history from the University of Western Ontario.