By Keith Grant and Denis McKim 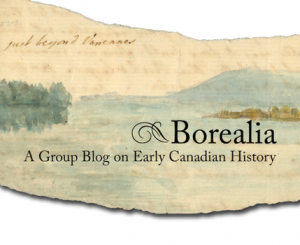 It was a packed house in Ottawa this summer for a Canadian Historical Association session entitled, “Who Killed Pre-Confederation Canadian History?” The large turnout and energetic Q & A period seemed to belie the title’s sense of demise: the history of early “Canada” appears to be alive and kicking.

Tom Peace and Robert Englebert, the organizers of that session, have rightly drawn attention to the relative underrepresentation of Pre-Confederation history at the annual meeting of the Canadian Historical Association, and wonder if this signals a wider crisis in the field. However, David Zylberberg has recently questioned this narrative of decline, observing that other measures—such as dissertations, faculty hires, or prestigious book prizes—suggest an enduring interest in early Canadian history. We might add, anecdotally, that for better or for worse, historians who work on New France, Indigenous peoples, or the British Empire often hang their academic hats at more specialized conferences or journals. Early Canadian sessions, for example, were a significant presence at the Omohundro Institute of Early American History and Culture (Halifax, June 2014), and at the American Society for Environmental History (Washington, March 2015). Or recall the lively pieces by Jeffers Lennox (on the geography of interactions in early Nova Scotia) and Nancy Christie (on families and authority in counterrevolutionary Montreal) in recent issues of the William and Mary Quarterly. Plenty of good work on early Canada is being done; it’s just that a good deal of it is being done in contexts that aren’t overtly Canadian.

That early Canadianists present or publish their work in such a variety of settings is related to another theme raised during this summer’s CHA session: transnational framing. “Pre-Confederation” or, for that matter, “early ‘Canada,” are phrases that can give a teleological, nation-state-centred cast to historical narratives. Yet the reality on the ground, as a couple of the session’s participants argued, was far more fluid and contingent than maps of colonial boundaries would suggest.

So perhaps “Pre-Confederation Canadian History” is dead, if by this one means a prelude to developments that occurred after 1867. But scholarship on the overlapping histories of Indigenous peoples, the changing continental environment, North American colonial relationships, and global imperialism are very much alive and speak to issues of continuing relevance.

Borealia (bor-ee-al-ya) is a new academic group blog on early Canadian history that can be found at http://earlycanadianhistory.ca.

The goal of Borealia is to provide an energetic, professional, and respectful space for conversation about research and teaching in early Canadian history. We believe that a dedicated forum for discussion, alongside broader historical associations and publications, will nurture informal networks of scholars and will demonstrate the vitality of the field among colleagues and the public.

Borealia (“northern”) is a title expansive enough to take in the breadth of our field. We are interested in all regions of what eventually became Canada, to about 1867, and connections to the wider world. We hope our contributors will reflect the diversity of our field, encompassing cultural, intellectual, political, religious, economic, and other perspectives, and will come from every stage of academic careers. We will strive to have content in both English and French.

We intend the tone of the blog to be positive, focused on content and ideas, respectful and civil in conversation, and professional. If the blog were a restaurant, it would be “casual fine dining.” We anticipate a modest but regular schedule of blog posts, which will include brief work-in-progress profiles, research notes, timely historical commentary, author interviews and book reviews, reflections on teaching and career development, digital and public history, and conference recaps.