For some years I taught an undergraduate seminar on the history of the Canadian left, and one of the things students did at the first meeting was to try to name people who represented the contemporary “left” in Canada. Last year, the answers included Jack Layton, Olivia Chow and Thomas Mulcair, an indication that at least in the student imagination the New Democratic Party is still a force on the left. In the case of Layton, who died in 2011, the student made a strong case for his continued influence after his death. They also identified Elizabeth May and David Coon, the latter being the Green Party leader in our province who was soon elected to the legislature. Two other party leaders were named, Justin Trudeau (Liberals) and Miguel Figueroa (Communists). A local anti-poverty activist was named. I can see why Rick Mercer was included, less so Peter Mansbridge! The previous offering of the course included some of the above plus David Suzuki and Naomi Klein, Ed Broadbent and Megan Leslie, Buzz Hargrove and Pam Palmeter. As you can see, it is an eclectic picture that confirms the challenge students face in identifying the face of the contemporary left.

As students went on to look into definitions of the left, things became more specific. The Gage Canadian Dictionary defined the left as “a group or party advocating or favoring social, political and economic policies aimed at more or less equal distribution of rights, obligations and wealth within the community or state”, and the Canadian Oxford Dictionary defined the left as “a group or section favouring socialism; socialists collectively”. We also went on to sample the musician Sam Roberts, whose early releases include an intriguing song under the title “Canadian Dream“. It can be viewed on YouTube with various visuals, one of them scenes from Occupy Toronto: “I went out on the street today / The Canadian dream was as far away / As it’s ever been, As it’s ever been”. The political implications were elusive – “Everything moves real slow when it’s forty below” – but it was impossible to avoid the pointed refrain: “S.O.C.I.A.L.I.S.M. is here to stay. S.O.C.I.A.L.I.S.M. is the only way, hey”.[i] When students read Ian McKay’s provocative Rebels, Reds, Radicals: Rethinking Canada’s Left History, they discovered that McKay considers all socialists to be leftists, but is less certain that all leftists are socialists and worries that the prevailing liberal order has been far too successful in “digesting” its left oppositions.

One theme I tried to point to in the course was the existence of a pre-socialist left in Canada prior to the 1890s, when the first avowedly socialist organizations appeared in Canada. History students are aware that the origins of the modern left are traced from the time of the French Revolution, particularly its agenda of liberty, equality and fraternity – the last term often translated more lately as community. More critical approaches, such as McKay’s, have defined the terms a little differently: property rights first, and liberty and equality for those who qualified. The priorities of that first left included some basic elements of a formal liberal democracy, notably elected assemblies with full legislative powers, universal adult (by which they meant masculine and preferably white) suffrage, freedom of speech and association, and equal rights and due process under the law. But history turned out to be more complicated than that, and movements for a larger range of social and economic rights became increasingly prominent in the history of the left.

This is not the place to review the evidence of what happened in the territories that ultimately came under the sway of the Canada project, except to point out that from the time of the American and French Revolutions in the late 18th century through to the Provisional Governments in the Northwest a century later, we find a variety of social movements invoking principles of liberty, equality and community in their search for alternatives to the dominant social order. If one of the objectives of people’s history is to enable people to “see themselves” experimenting in democratic forms and seeking alternative futures, these stories need to be rediscovered more fully. The evidence for this early period points to multiple sites of activism, and we may ask ourselves whether the kaleidoscopic past is so different from the often eclectic present that the students regularly identified.

The idea that full democratic rights could not be achieved without addressing the oppressive social and economic conditions of capitalism went on at the end of the 19th century to become the working premise of the next left, a “new” left that prevailed well into the first half of the 20th century (and that we, from our current vantage point, smugly refer to as the “old” left). It is important to note that this left continued to be sustained by the older ideals of popular sovereignty and active citizenship.[ii] And it remains the case that struggles for political and civil liberties, against slavery and colonialism, against the oppressions of race, gender and class, and for the defence of environment and community have continued to be at the heart of today’s versions of a “new” left.

Generalizations are difficult, but it can be claimed that the core principle of the left has been the enlargement of the democratic space, through some degree of limits on the free rule of capitalism and some vision of alternative ways of living together. If we think of the history of the left as a long experiment in constructive opposition to the dominant order, we can see that these themes are always being tested and rehearsed. Gordon Hak’s history of the left in British Columbia makes the point by encouraging us to consider the left as an unstable historical reality that is always multi-faceted and contested but still shares a number of central values. He summarizes these, briefly, as “equality and community, as well as physical, social and environmental security, human dignity, democracy, and a decent standard of living for all”.[iii]

Much of the discussion on the left in Canada lately has been about the extreme disconnect between the malaise of our fellow citizens over so many issues and the obvious impoverishment of our political leadership. As Cy Gonick put it recently in Canadian Dimension, “there are many more socialists and anti-capitalists, and capitalism is in greater disrepute globally than at any other time since the 1930s”.[iv] Despite the activism of multiple actually existing social movements, the organized left seems weak and divided and often invisible. It is hard to escape the feeling that all this could and should add up to more. Gonick sees the future in a pan-Canadian anti-capitalist, anti-colonial and eco-socialist party. 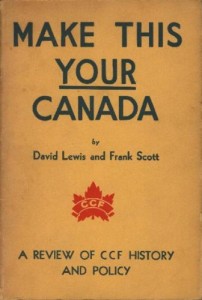 It may be true that the New Democratic Party no longer has the will to provide leadership on the left. Indeed, the party has abandoned its commitment to socialism in language that would embarrass even the not-so-radical authors of Make this Your Canada (1943), once considered the classic text of the parliamentary left. But it is also true that there are still many activist leftists – including socialists – within the ranks of the NDP, and they continue to articulate the hopeful social movements of our times. This appeal to social activists is one distinction the NDP still has, and which parties of the centre, in their quest to manage dissent in the interests of a franchise on power, will rarely tolerate or encourage. Often hidden from us by the limitations of public discourse, there exists across this country a large archipelago of activist engagement. This is a social democratic force that needs to find political expression, including at election times. The Leap Manifesto points ahead, but sometimes things move real slow, a lot slower than we want. This too is part of the legacy of the left in Canada.

David Frank is a former professor of history at the University of New Brunswick. This discussion is based in part on a paper presented to the Society for Socialist Studies, 1 June 2015, under the title “Was There a Left in Canada before the 1890s? An Historical Speculation”.

[i] Interestingly, Blue Rodeo this month have issued an explicit political song, “Stealin’ All My Dreams”, whose recital of grievances is more clear.

[ii] Some scholars on the left have been interested in how such “residual” and “inherent” traditions acquired new meaning when they were transformed into “emergent” ideas about the agenda for social change. See George Rudé, Ideology and Popular Protest (London: Lawrence and Wishart, 1980), esp. Chapters 1 and 2; Raymond Williams, Problems in Materialism and Culture: Selected Essays (London: Verso Editions, 1980), esp. pp. 30-49.

4 thoughts on “Everything Moves Real Slow: Where is the Left?”