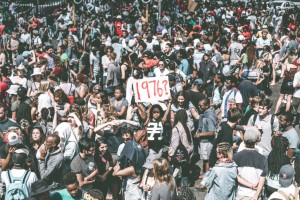 It’s been an exciting and inspiring week in South Africa watching the student movement #FeesMustFall in action. (The name builds on the recent successful #rhodesmustfall campaign that resulted in the removal of the Cecil Rhodes statue at the University of Cape Town, or the UCT). The students have placed the demand for free, quality education front and center on the public agenda here.

It all started at Wits University last week and rapidly escalated. On Wednesday, October 21, I was working in the national library when I heard the stun grenades go off at parliament, followed by screaming. By the time I got there the students, who had broken past police and gained access to parliament grounds in order to disrupt the speech by the finance minister, had been dispersed. Dispersed but certainly not defeated. At the UCT the faculty and campus workers (who are facing impending outsourcing), led by the students, regrouped and, among other things, marched to the downtown police station demanding the release of the arrested students. The police actually had the nerve to charge six of the students with Treason, i.e., the fact they climbed the fence and got to the front of parliament was called an attempt to overthrow the government. They’ve been widely mocked and criticized for this so surely the charges will be dropped.

Across the country, at most if not every single university, students have blocked entrances and exits to campuses, occupied buildings, etc., resulting in campus shutdowns. And at many institutions at least some faculty have been on board. Friends of mine write about attending sit-ins, going to rallies, organizing open strategy meetings, raising money for food for students occupying campuses and so on. Mostly this has been a very self-disciplined, organized affair as far I can tell from watching the news and twitterverse. Here in Cape Town, and elsewhere where I have friends who teach, the students have been amazing: they know they are making history, and that the world is watching–the ones I talked to are thrilled by demonstrations of solidarity by students at the School of Oriental and African Studies in London–and are being extraordinarily strategic when planning their next moves.

One thing that strikes me, once again, is the importance of history to those in South Africa struggling for a just society. I repeatedly hear students cite the 1955 Freedom Charter that declared free education a right. The Freedom Charter was a blueprint for a future democratic South Africa adopted at the Congress of the People, which included the African National Congress (ANC), among other anti-apartheid organizations, in June 1955. The Congress of the People was attended by some 3,000 delegates and was one of the most representative gatherings ever held in South Africa. The Charter opens with the following: “WE, THE PEOPLE OF SOUTH AFRICA, declare for all our country and the world to know: that South Africa belongs to all who live in it, black and white, and that no government can justly claim authority unless it is based on the will of all the people.” It includes a list of demands and the passage pertaining to education is as follows:

The doors of learning and of culture shall be opened! The government shall discover, develop and encourage national talent for the enhancement of our cultural life; All the cultural treasures of mankind shall be open to all, by free exchange of books, ideas and contact with other lands; The aim of education shall be to teach the youth to love their people and their culture, to honour human brotherhood, liberty and peace; Education shall be free, compulsory, universal and equal for all, children; Higher education and technical training shall be opened to all by means of state allowances and scholarships awarded on the basis of merit; Adult illiteracy shall be ended by a mass state education plan; Teachers shall have all the rights of other citizens; The colour bar in cultural life, in sport and in education shall be abolished.

Students are also fully aware of the comparisons being made between their potentially revolutionary movement and the student uprising of 1976, a.k.a. the Soweto Uprising. The uprising began as a student protest in the black township of Soweto against an act mandating that students learn Afrikaans, which South African blacks saw as the language of their oppressors. But after unarmed children were killed by police, the protest led to widespread rioting in townships across South Africa. It was a turning point in the struggle against apartheid, when, as veteran ANC leader Ahmed Kathrada remembers, “fear was driven out” of South Africans opposed to the racist regime.

Friday all eyes were north, in Pretoria, where thousands of students, faculty and supporters gathered in front of the Union Buildings (they have two parts to the parliament here). I spent the afternoon in front of the Cape Town parliament with hundreds of students who felt excited and hopeful, since they knew they were putting on sufficient pressure to make the government act. And it did. The president, Jacob Zuma, met with student representatives and university vice chancellors and announced afterwards, in what looked like a hasty concession that lacked any real long-term commitments, that there would be a zero tuition increase next year. Given that universities had introduced a minimum of ten percent rate increases, this is a victory, and one that smacks of ANC desperation to stop this movement from spreading further.

In front of the parliament in Cape Town, one young woman screamed with excitement and began running around where we were all sitting after she read about Zuma’s announcement on her smartphone. Everyone started clapping and hooting and many sang the national anthem. Zuma, however, had made his announcement on television and refused to go out to address the thousands who had made their way to Pretoria; a cowardly move on his part, though not surprising. (He was heckled while speaking at Nelson Mandela’s memorial and I’m sure he knew he’d be booed again). Predictably, some starting throwing stones and burning portapotties in anger. More rubber bullets and stun grenades; some media and other witnesses, like parents attending the rally in support of their kids, reported the police even pointed loaded guns at the crowd.

People everywhere are inspired and proud of the students. I’ve been listening to the South African Broadcasting Corporation call-in shows and it’s been very moving to hear what people say, the hope they express that this is finally the start of building a truly democratic South Africa, one that cares about ordinary people. Older people speak with such excitement; one woman who said she had been part of the “struggle” in the 1970s and 1980s, and had feared it had withered away under the rule of the neo-liberal ANC, exclaimed with exhilaration that she could die happy tonight knowing the struggle was alive and well and in good hands!

One thing I noticed is how mixed the movement is: in a country still very marked by white privilege and widespread extreme black poverty, the student movement includes all shades of skin colour. Some students I was speaking with on Friday said they found this the most hopeful thing of all, that the vision of free, quality education is for once uniting people regardless of colour. As I say, it’s been very inspiring to be here, and hard to concentrate on the Hansard debates from the 1960s I’m trying to read!

The question is: what now? The ANC is clearly trying to undercut the students’ momentum by giving them the guarantee of a one-year zero percent increase and agreeing to organize some kind of task force to discuss long-term solutions to the predictable effects of starving the universities of public funding and commodifying higher education. Already you see students protesting that the movement is called #FeesMustFall, not #FeeIncreasesMustFall, i.e., they want free education. Zero percent means nothing to the students who can’t afford to pay the current rates. Those who have been kicked out of school because of unpaid fees ask, why is this a victory?

But whether they’ll continue to press on for free tuition now or wait to hear the results of the “task force” is as yet unclear. So far Wits University students, after a three-hour mass meeting on Saturday, have decided to continue the struggle for free education; so the university will continue to be closed until at least Tuesday. Also on Saturday, UCT students met on campus to protest the impending outsourcing of a variety of university workers’ jobs and to demand a decent minimum wage for workers and that there be no retaliation against workers who took time away from work to support the students. It is wonderful to see students continuing to be in solidarity with workers and shows a truly revolutionary analysis on their part. Meanwhile, all final exams have been postponed a week. As to what’s next, who knows? It’s South Africa: anything can happen here and it often does.

Susanne M. Klausen is an historian at Carleton University, currently on research sabbatical in South Africa.

One thought on “History in the Making: Witnessing South Africa’s #FeesMustFall Campaign”