In this installment of my four part series on solar energy in Canada, I examine how small numbers of environmentalists introduced solar technology to North Americans and successfully championed it as the centerpiece of the first sustainable development strategies. (Click here to read part one)

Solar energy has a long history. The first efforts to use solar energy occurred in 19th century France where Augustin Monchot experimented with a solar steam engine. In the early 20th century, American engineer and inventor Frank Schulman built a series of “sun engines.” His experiments culminated in a solar thermal power plant used for irrigation in Maadi, Egypt in 1913. Unfortunately for Schulman, the First World War, improvements in the internal combustion engine, and falling oil prices largely ended interest in solar power.

NASA’s space program rekindled interest in solar energy in the 1950s. Searching for a portable power source for the first satellites, electrical engineer Dr. Hans Ziegler began experimenting with the photovoltaic effect. Scientists had fitfully attempted to harness this method of producing an electric current since its discovery in the mid-19th century. Breakthroughs in the chemistry of silicon made it possible for Ziegler’s team to produce usable amounts of electricity from sunlight. Photovotaic cells quickly found a niche producing power in space.

Outside of this niche, solar technology generated relatively little interest throughout the 1950s and 1960s. The energy crisis of 1973 and the practices of forecasting through which it was interpreted changed that. The energy models discussed in the first part of this series made forecasting central to any discussion of energy. This heightened the authority of the small numbers of energy analysts and environmentalists who had been warning of the coming end of oil since the 1960s. 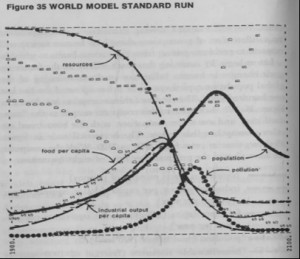 A standard run of the Club of Rome’s World3 computer model. Note the rapid collapses it projects in the late twentieth century.
Used with permission of Denis Meadows. Denis Meadows, et al, The Limits to Growth (New York: Universe Books, 1972).

The Club of Rome was the most sensational of these neo-Malthusians. Armed with state of the art computers and an exhaustive feedback model, the Club of Rome’s researchers produced the (in)famous Limits to Growth Report in 1972.[1] It predicted that the world would run short of resources within a hundred years and descend into chaos unless conservation programs were implemented and abandoned rapid growth abandoned. When the oil shock dramatized the fragility of global oil supplies less than a year later, the possibility of energy scarcity suddenly became a concern for governments around the world.

Concerns over scarcity and the growing power of the environmental movement caused solar energy’s stock to rise dramatically. The United States began to invest in solar heating and terrestrial photovoltaics under President Richard Nixon’s plan for energy self-sufficiency. Environmentalists also quickly embraced it. Denis Hayes, one of the organizers of Earth Day, began to organize solar days to raise awareness about the technology’s potential. He would later serve as the head the Solar Energy Research Institute under President Jimmy Carter. Other environmentalists would be even more influential.

Amory Lovins, a physicist-cum-environmentalist who would go on to become one of the most influential advocates of efficiency, outlined a “soft path” approach to development built with the support of the Friends of the Earth. His alternative energy strategy went mainstream in 1976 with his essay “Energy Strategy: The Road Not Taken?” in Foreign Affairs.[2] Lovins’ assertions that “soft” decentralized solar technology posed less of an environmental and technological risk than “hard” nuclear power and would not run out as fossil fuels would, introduced many readers to renewable energy. More importantly, Lovins suggested that the legions of technicians required to build and service renewable energy systems would create jobs in communities across North America. 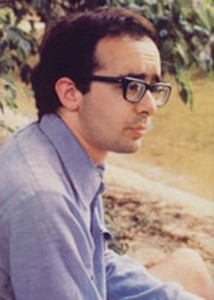 Amory Lovins in 1977. Photo from the Plowboy Interview, Mother Earth News (November/December 1977).
The complete interview can be found here: http://www.motherearthnews.com/renewable-energy/amory-lovins-energy-analyst-zmaz77ndzgoe.aspx

The popularity of Lovins’ vision of a solar powered economic and environmental renaissance brought him to Canada. Over the winter of 1975-76, he worked with the Science Council of Canada to develop its sustainable development program, the Conserver Society.[3] He also worked closely with the Department of Energy, Mines, and Resources on its conservation and energy substitution strategy. He had a substantial impact. The head of the Department’s Office of Energy Conservation, David Brooks, left the government soon after to found the Friends of the Earth Canada. Brooks spent the rest of the decade advocating energy conservation and the adoption of renewables.

Solar technology’s potential ability to create jobs while mitigating environmental risk also drew the attention of Canadian provincial governments. In Atlantic Canada, the Alexander Campbell government on Prince Edward Island launched a development program for renewables in response to rising gas prices and growing deindustrialization in the early 1970s. Campbell’s government drew heavily on environmental groups to formulate its plan for PEI. The New Alchemy Institute of Cape Cod Massachusetts provided its most iconic project, the PEI Ark. Led by Canadian scientist and environmentalist, John Todd, the New Alchemists promised their Ark project would provide the island with sustainable housing and help create a wind technology industry while preserving the local ecology and the island’s rural culture.[4] 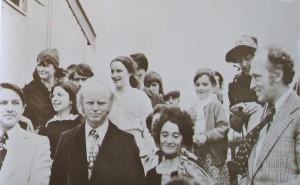 By outlining a compelling reason for investing in solar technology and working closely with concerned governments environmentalists pushed renewable energy into discussions about Canada’s energy future. A consensus built that solar and other renewables had an important place in Canada’s future. Federal policy makers, however, faced questions: How soon could solar contribute? Could it really create jobs and new industries? This uncertainty needed to be addressed before solar could change from a promising, but obscure technology to one worth investing tax dollars in. Thankfully for solar advocates, a group of engineers and a computer model called WATSUN had answers. This cheerily named program would define solar technology’s capabilities and play a key role in convincing the federal government that solar heating’s time had finally come.

Hank Trim is a SSHRC postdoctoral fellow at the University of California, Santa Barbara. This is the second in a four part monthly series on the rise and fall of solar energy in the 1970s and 1980s

[1] Donella H. Meadows, Dennis L. Meadows, Jørgen Randers, and William W. Behrens III, The Limits to Growth: A Report to the Club of Rome on the Predicament of Mankind (New York: Universe Books, 1972).

One thought on “‘Tomorrow: Sunny’: The Rise and Fall of Solar Heating in 1970s Canada, part 2”