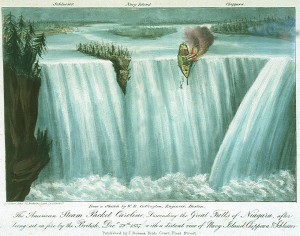 In this post, I will briefly explain the research that I am currently conducting as a postdoctoral fellow at the McNeil Center for Early American Studies at the University of Pennsylvania and how my time in Philadelphia has changed the overall aim of my project.

Whether they wanted it or not, Americans were dragged into this conflict. In the wake of the failed 1837 Canadian Rebellions, several rebel leaders sought refuge in American border towns like Burlington and Watertown, where they sought assistance from Americans. They met with local leaders and politicians and travelled to major cities such as Boston and Philadelphia seeking financial and military support. Though they failed to secure the assistance of the Federal government—which even sent troops to the border to ensure “American neutrality”—they had more success at the local level. Throughout Michigan, Vermont, and New York, Americans living in the borderland expressed sympathy for the Canadian rebels and joined secret societies, known as Hunter’s Lodges. By the thousands, they pledged to free Canada from the yoke of British imperialism and assist the rebels in a “Canadian Revolution.”

The Rebellions were especially important since they coincided with a momentous period in American history. [Read More]