Tina Adcock, an editor of the Otter blog at the Network in Canadian & Environmental history website, organized a series of posts on the intersections between environmental and labour history for the month of November. John-Henry Harter opened the series with his post “When Blue Meets Green: The Intersection of Workers and Environmentalists”. This was followed by Mark McLaughlin’s “Seeing the Forest (Workers) for the Trees: Environmental and Labour History in New Brunswick’s Forests” and “Workers as Commodities: The Case of Asbestos, Quebec” from Jessica van Horssen. The final post from Willeen Keough is being published today: “If a sealer talks about conservation, does anybody hear?” I also contributed a post titled “‘Two chemical works behind him, and a soap factory in front’: Living and Working in London’s Industrial Marshlands,” which, I am republishing below.

The series asks us to rethink the simplistic rhetoric that sets workers against environmentalist. This is particularly relevant in a week where Saskatchewan’s Brad Wall is in Paris to defend oil workers instead of collaborate in reaching a strong agreement to prevent catastrophic climate change. This is effective rhetoric for a popular conservative premier who does not want to simply campaign on the behalf of big oil companies and he is correct that real action on climate change will be difficult for workers in the coal and oil industries (though the global price of oil likely has a bigger influence on the second group). It is not clear that a shift away from fossil fuels will significantly damage the wider economy over the long term and the economic cost of inaction are becoming increasingly clear.

Environmental history helps break down the simplistic workers vs environment narratives. Workers were often exposed to the same toxins that damaged the wider ecosystem and environmental destruction has hampered economic growth in the longer term. Shovel ready environmental remediation projects have  provided a lot of jobs for unemployed workers in the past and given the stubbornly low price of oil, it is possible that green energy and other retrofitting projects will provide crucial jobs to help offset the layoffs in the oil patch.

Two chemical works behind him, and a soap factory in front”: Living and Working in London’s Industrial Marshlands 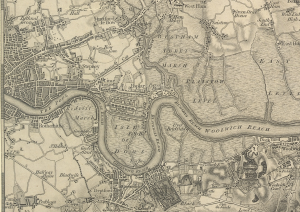 East London and Thames Estuary from the OS Sheet 1, 1805. This work is based on data provided through www.VisionofBritain.org.uk and uses historical material which is copyright of the Great Britain Historical GIS Project and the University of Portsmouth.

The environment matters in urban histories. Cities have never been simple or static backdrops against which social and political histories unfolded. Such histories, particularly those focused on the rise of labour movements, are considerably richer when they pay close attention to the environmental context. Social divisions were exacerbated by differing environmental conditions across a city. Nineteenth-century Londoners, for example, experienced a hierarchy of urban environments. While the wealthy laid claim to healthier, higher ground, much of the working class crowded near the docks and factories in the Thames Estuary and Lea Valley.

London was the largest city in the world throughout most of the nineteenth century, growing from about one million in 1801 to over six and a half million a century later. The city expanded from its original core in the City of London in all directions. Most Londoners, however, avoided living on the marshlands of the Thames Estuary. In the mid-nineteenth century, people associated these marshlands with the threat of fevers. As they later filled in with polluting industries, the drained marshes remained unattractive for housing. London’s population became concentrated on the higher ground away from the Thames Estuary, in the northwest and south.

Docks, wharves and factories, on the other hand, were concentrated on the marshlands in the Thames Estuary and in the Lea, Wandle and Rodding Valleys. Dockers and many industrial workers lived in crowded housing built on the marshlands in close proximity to their places of employment. Long hours, low pay and the high cost of transportation meant workers needed to live within walking distance of the docks and factories. People without regular jobs needed to be near the docks and other opportunities for casual work. Yet close proximity to work came with significant environmental consequences. Families living near the docks on the Isle of Dogs or in Canning Town, for example, faced regular flooding. High infant mortality rates in the marshlands suggest these districts were contaminated with human waste until the early twentieth century. The nearby rivers were heavily polluted with both sewage and industrial waste. To make matters worse, the prevailing winds carried the intense air pollution from hundreds of thousands of domestic and industrial coal fires to the east of London. People could see and smell their low social standing as they left their crowded homes and walked to work each morning.

The topography of the region that became Greater London during the nineteenth century shaped the social and political geographies of the city. James Hanley explains that longstanding legal and political conventions placed the burden of drainage and flood defense on the property holders that immediately benefited from the infrastructure, and so exacerbated these divisions. Draining these marshlands and maintaining river defenses were expensive propositions. Local governments bore the burden of these high costs before they could even start to address social issues. Wealthier districts on higher and drier ground faced relatively limited costs for drainage, and were able to keep taxes low. The development of a two-tier system of municipal government, starting with the Municipal Board of Works in 1855, helped to spread the burden of major projects such as the London “Main Drain.” But it did not address all of the challenges faced by marshland districts, and did little to help rapidly growing suburbs like West Ham, Tottenham and Croydon that were located outside of London.

Consider the example of West Ham and the Main Drain sewer. The housing built during the mid-nineteenth century on Abbey Marsh, on the eastern edge of Greater London, was situated well below the high water levels of the adjacent River Lea. When London built the massive Main Drain sewer across the marsh in the 1860s, they created a raised embankment that was taller than the houses, and that divided the rapidly growing suburb of West Ham in half. This embankment became the industrial suburb’s “boulevard.” By the turn of the twentieth century, the sewer allowed a working-class resident the recreational opportunity of “promenading along this embankment with a gasworks on his right, a sewage pumping station on his left, two chemical works behind him, and a soap factory in front” (Terrett 1902).

J.J. Terrett, a local socialist politician, focused on the unsavoury environmental conditions of the industrial marshlands in the opening pages of a pamphlet defending West Ham’s “municipal socialism.” He had been part of the Labour Group, which was the first labour and socialist coalition to control a municipal government in late 1898, a few years before the national Labour Party formed. For Terrett and many other workers in West Ham, the polluted and unhealthy conditions of this industrial suburb were part of the wider social injustice experienced by the working class who lived amongst Greater London’s docks and factories. These conditions not only justified the Labour Group’s increased spending on public health interventions to address some of the worst local environmental conditions. They also help explain the high level of local taxation, which opponents of “municipal socialism” used to discredit the Labour Group. Yet the suburb had struggled with the high cost of marsh drainage, combined with the regular municipal expenses of schools, roads and hospitals, for at least a decade before the labour politicians briefly won control of council between 1898 and 1900.

Historians have long recognized wages, working conditions and housing as crucial factors in shaping the social and political history of a community. In recent decades, they have become more attentive to the urban landscape and the way everyday experiences in cities shaped social identities. The making of working- and middle-class identities related to where people lived as much as where they worked. Urban environmental history allows scholars to add further depth to this analysis, and to explore how the topography, location of industries, prevailing winds and sites of accumulated pollution factored into the social geography of cities. Paying close attention to the environmental context often provides new insights into the rise of successful labour movements.

Labour politicians in Greater London recognized the environmental inequalities in the city. By the end of the nineteenth century, labour leaders in West Ham and Poplar added campaigns for better urban conditions to their demands for an eight-hour day and union wages. Long before modern environmentalism developed in the mid-twentieth century, workers in London recognized their disadvantaged living conditions amongst the factories in the Thames Estuary. They demanded government take action to reduce infant mortality and reduce the sewage dumped into their local rivers. These demands remained focused on improving human health instead of ensuring a healthier ecosystem, but the rivers benefited nonetheless.

Terrett, J. J. “Municipal Socialism” in West Ham: A Reply to “The Times,” and Others. London: Twentieth century press, limited, 1902. (From the British Library)

One thought on “When Blue Meets Green: A NiCHE series”