If one looks at Veterans’ Affairs’ website one will find a page dedicated to the National War Memorial. The opening paragraph of the text on the page reads, 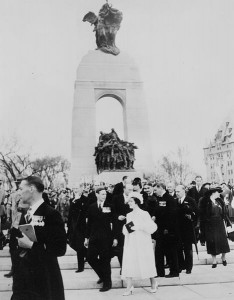 The National War Memorial, also known as “The Response,” is a cenotaph symbolizing the sacrifice of all Canadian Armed Forces personnel who have served Canada in time of war in the cause of peace and freedom–past, present and future. The memorial is the site of the national Remembrance Day Ceremony on November 11.

This National War Memorial began life in the interwar years as a tribute to the fallen of World War One. His Majesty King George V, the website informs us, unveiled it on 21 May 1939, with the words, “One sees at a glance the answer made by Canada when the world’s peace was broken and freedom threatened in the fateful years of the Great War.”

That Canada stood in defense of freedom is thus central both to George V’s 1939 message, and to that offered by Veterans Affairs in 2015. Further, the assertion that the cenotaph symbolizes all Canadians who have sacrificed “in the cause of peace and freedom—past, present, and future,” serves to legitimate not just Canadian participation in World War One, but all Canadian military actions since then. Accordingly, it behooves us to think critically about the notion that the over 66,000 Canadians and Newfoundlanders who died in the Great War sacrificed themselves for the cause of freedom.

First, who were Canadians and Newfoundlanders fighting alongside? It’s true that the two great European democracies – Britain and France – were our allies, as, eventually, were Italy, another democracy, and the United States. However, Russia, the most autocratic and authoritarian regime in Europe, was also a key partner. Furthermore, the “free” democracies, Britain and France, maintained massive overseas Empires collectively subjugating hundreds of millions of people who lived without freedom and oftentimes in very dire circumstances. Clearly, to argue we were fighting for “freedom”, therefore, you have to ignore the unfree status of the subjects of the Russian, French, British, Italian, and American Empires. Indeed, many conscripts from the European empires literally fought alongside Canadian soldiers in northern France. When Canadians were among the first soldiers in the world to be gassed by the Germans at Ypres in 1915, for example, in the trenches beside them were troops from French Algeria and Morocco. Ignoring the unfree peoples of the empires is deeply Eurocentric and perpetuates a historical injustice.

One can even question the degree to which the people of Canada, Newfoundland, and their allies were themselves “free” in the 1910s. Certainly, if freedom entailed the right to a say in politics then many citizens’ freedom was not fully realized. First, in none of these states did women have the right to vote, meaning that over 50% of the population of the age of majority lacked the franchise. Second, while France following the founding of the Third Republic in 1870, had truly universal manhood suffrage, this was not the case among the other allies. Canada disenfranchised men who had “Indian” status (with some exceptions), as the state used the franchise as an incentive to assimilation. Across the country – the situation varied from province to province – property and residency requirements further restricted the right to vote meaning, effectively, that many working-class and immigrant men were denied the ballot as well. In Great Britain, the situation was similar: all male property owners and rent-payers could vote, but this still excluded, by some estimates, up to 1/3 of men of the age of majority. The same restrictions, moreover, operated in Newfoundland. Likewise, Italy used property restrictions to limit male suffrage, and in the United States, following the Reconstruction period in the former states of the southern confederacy, millions of African American males were denied their democratic rights through the Jim Crow laws and violent intimidation. Russia, of course, lacked responsible government and only a precious few were eligible to vote for representatives of its parliament (the “Duma”), which had, at any rate, been effectively neutralized by Czar Nicholas II in the years following the Revolution of 1905.

Whether Canada, Newfoundland, and their allies represented the cause of freedom becomes yet more muddled when one examines the situation in Germany, their principle enemy. It is true of course, that Germany, like Russia, lacked responsible government, meaning that the German parliament (Reichstag) could vote no-confidence in the government and that this would not trigger an election so long as the cabinet retained the support of the Emperor (Kaiser). But the Reichstag did have the critical power to approve budgets and, importantly, German men, like their French counterparts, had truly universal manhood suffrage: all men the age of majority could vote. Could men in Britain, Canada and their allies thus claim to be more “free” than their German counterparts? Certainly, Russian men could not; as for the others, the answer is at best unclear.

This is only slightly more credible. Once again, you have to ignore the fact that western states, including Canada, did not give a fig about the freedom of nations in many other parts of the world. The British Empire alone, with which most Canadians still strongly identified and of which Newfoundland remained a colony, included many dozens if not hundreds of nations under its yolk. The Russian Empire was constructed without regard for the national aspirations of Ukrainians, Poles, Lithuanians, Latvians, Estonians, Chechens, Georgians, Chukchis and more. Canada itself, for that matter, was a European nation state occupying the historical territory of Canada’s First Peoples/Nations. Newfoundland, as a colony, was similarly built upon the ancestral territories of the Beothuk and Mi’kmaq peoples. If we were fighting for the freedom of nations, then we were certainly not applying our commitment to that freedom very evenly.

In truth, although Britain entered the war in defense of Belgian neutrality, it did not do so out of any concern for “freedom” but to preserve the balance of power in Europe – its strategic goal on the continent since at least 1815. France entered the war because of its alliance with Russia, which it had formed to preserve its dreams of avenging its loss of territory in the Franco-Prussian War of 1870-71. French leaders feared that should Russia be defeated by the Germans and Austrians, France’s position as a continental power would be finished. Russia entered the war to protect the Serbs, whom the Russian elite perceived to be fellow Slavs, as well as to keep Austro-Hungarian power out of the Balkans, an area the Russians hoped to dominate themselves. Italy entered the war in 1915 for what were even crasser reasons – the promise of territory from their new allies. Why did Canada enter the war? Canada largely joined in because Britain did; sadly, the debate never really got much beyond that in government circles. And Newfoundland, as a colony, really had no say in the matter at all.

So we didn’t fight the war for freedom, which begs a host of questions. These include (but are certainly not limited to) the following three.

None of this is meant to disrespect the memory of the more than 66,000 who gave their lives. Many no doubt believed the propaganda they were being fed: that they were fighting for some higher purpose such as freedom. Many others may have enlisted for more banal reasons like a desire for adventure; some were fighting because, in fact, they felt a strong allegiance to the British Empire. Regardless, we shouldn’t allow the propaganda messages of the WW1 era to be perpetuated ad infinitum. The memory of the Great War should not be reduced to simplistic sloganeering about freedom, as in the words of George V or the text of the Veterans Affairs website. Recognizing the ambiguity and complexity of the Great War requires us to acknowledge that our more than 66,000 honoured dead were sacrificed by our leaders for very poor reasons indeed. It should also prompt us to think critically about the deployment of our military in other conflicts, past and present.

Geoff Read is an associate professor of history at Huron University College.

10 thoughts on “World War One: A Fight for Freedom?”