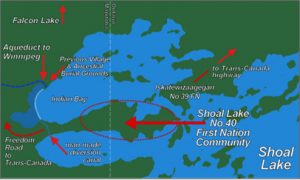 I wish to illustrate the severe negative cultural and spiritual impacts Indigenous people face when forced to reallocate from their traditional and sacred lands. Since the development in 1919, of a 100km aqueduct to transport drinking water from Shoal Lake 40 First Nation (SL40) to the City of Winnipeg, residents of a once flourishing and prosperous tract of land have been constrained to an island, and subjected to the adverse effects of this so-called “engineering feat.” Construction of the aqueduct, providing the City of Winnipeg with clean drinking water, ironically had a variety of negative effects on the quality of water available for the Shoal Lake First Nations communities. One negative environmental impact of this project includes the artificial increase of water levels in Shoal Lake1, which affects fishing and wild rice harvesting due to a rise in water levels by one meter, as well as diminished water quality.2 Lack of access to potable water has also left this community under a water boil advisory off and on over the years, most recently since February 1997. Simply put: the City of Winnipeg continues to benefit from the natural resources of SL40 at the cost of this Indigenous community’s cultural, ecological, and social well-being.

The most alarming aspect of this issue is the consistent (and very intentional) violations of human and Indigenous rights that SL40 has experienced over the last century. The injustice is so prevalent that SL40 has chronologically displayed the documentation on how they have been systematically wronged in their community centre, calling it the Museum of Canadian Human Rights Violations. I was fortunate enough to visit this exhibit with my research group last summer with the hope of delving deeper into the immediate perspectives of community members.Although I was granted insight to the community’s situation, I also understand why SL40 is careful not to compare their exhibition with the Canadian Museum of Human Rights. They may have every reason to state why their rights have been neglected on economic, social, political, and cultural levels for decades, however, they are also trying to work together with many levels of government to mitigate these issues.

Although resource management is a leading concern for SL40, I am concerned with cultural continuity – an issue that holds little weight in the Western world. If it wasn’t disempowering enough that the aqueduct was constructed on traditional burial grounds (the remains of their ancestors were excavated), they were also reallocated to a new tract of land – the island to which they are now constricted. The community has expressed concern over their decreasing population since SL40 is under such conflict. This is the wrench in the Medicine Wheel: if there is no one left to continue their cultural practices due to the colonial agenda, how is a community expected to celebrate, maintain, or even preserve their heritage? No water leads to people leaving to find water, which leads to migration, which leads to the disruption of the cultural continuity.

Since many community members are leaving their traditional lands to find a secure standard of living, causing a notable fracture in the community’s cultural continuity, it is now urgent to create initiatives that secure cultural practices and traditions. This is also highlighted in the Truth and Reconciliations Commission’s Calls for Action, where Recommendation 61 emphasizes the need for permanent funding towards protecting Indigenous culture.3 Rebuilding cultural identity begins with solidifying the relationship between humanity and the land; therefore, it is essential to reestablish the way the Western world perceives environment and property. Instead of seeing our natural resources as no more than a means to economic growth, the dominant world must acknowledge that the fundamental basis to Indigenous traditional knowledge lies in Mother Earth. Once robbed of the land, Indigenous cultures become extremely vulnerable.

This all comes down to a breach in human rights and freedoms. Winnipeg is so proud to have this sky-high manifestation of how human rights are at the forefront of Winnipeggers minds; however, we fail to mention the deprivation of human rights. From my personal experience, of course the Canadian Human Rights Museum was aesthetically pleasing and impressive, yet the museum that was the most memorable was the Canadian Human Rights Violations Museum. Not because it was a spectacular work of art, but because it was honest. Violation, after violation of rights have been chronologically laid out; how every intentionally discriminatory or neglectful decision was made against the livelihoods of SL 40. The saddest reality is how inaccessible the Shoal Lake 40 exhibit is, despite its impact on our ideas of a just world.

Anna Huard is a graduate student at the University of Winnipeg in the Masters of Development Practice program, with a focus on Indigenous Development. She was born and raised in Winnipeg, but her family is from Couchiching First Nation. She studies language and cultural revitalization, as well as policy analysis toward reintegrating traditional perspectives into contemporary discourses.