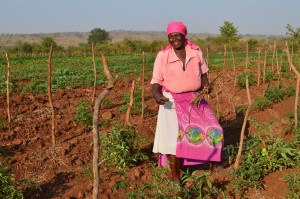 The people of Jomela village in eastern Limpopo Province, South Africa, feel like canaries in a coal mine. The local metaphor features a snail collecting ashes. When I last visited Jomela in April and May, sixty-five-year-old vegetable farmer Daina Mahlaule told me that home food gardens in the village produced “nothing, nothing at all” in the recent growing season. Scant rain had come too late for the maize and groundnuts that are staples of the local diet.

Now Mrs. Mahlaule and her neighbours find themselves living through one of the worst droughts in a century. This year’s extreme El Niño event – which may mean a mild winter for many of us here in Canada – has already delivered blistering heat and deepening drought to much of Southern Africa. It is now the middle of the southern hemisphere summer, the ‘rainy season’ on which home-based, rain-fed agriculture depends. But there is no rain. Rivers run low or dry, major national reservoirs are dangerously depleted, groundwater reserves are dwindling, and tens of thousands of cattle have perished.

Five of nine provinces in South Africa have declared a state of disaster. Neighbouring Zimbabwe has declared a national emergency. Malawi, Zambia, Lesotho and Mozambique are also affected. Neighbouring states have often turned to South Africa – with its massive, irrigated corporate farms – to purchase maize when their supplies run low. This year South Africa will have none to sell and will have to import up to half its own supply. My research assistant in Limpopo tells me that men with access to pick-up trucks are running a brisk business, buying up maize in 80 kilogram sacks at local mills and selling it around the countryside to panicking households.

Research indicates the enormity of this El Niño event is linked to, or at least exacerbated by, human-induced climate change. So beyond the statistics – millions across the region facing hunger as a second rainy season fails, basic food prices up by a third and maize by as much as 70 percent over recent averages – what does climate change mean in people’s daily lives in places already deeply affected? I focus here on women, who are the main household farmers in sub-Saharan Africa. 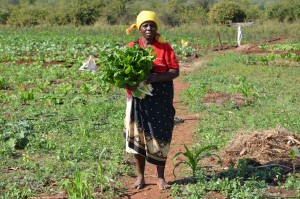 In Jomela it means borehole wells are starting to run dry. Mrs. Mahlaule can’t afford her own well, so her household relies on the municipal water supply. Water is supposed to run through those pipes twice a week. Women, often spelled off by children or grandchildren, line up hopefully on the appointed days. Some have as many as fifteen or twenty plastic containers to fill (they use 20-30 litres per person per day: Canadians use ten times that). On a good day, when the water actually flows, it trickles so slowly that people can spend two hours filling their cans – after queuing. That is time that can’t be spent studying, playing, or working for pay.

There haven’t been many good days lately. Failed rains mean ground water supplies and reservoirs are not replenished, and rural poverty and poor government planning exacerbate the effects of drought. Mrs. Mahlaule used to rely on her neighbour’s well for a back-up supply, but now there is barely enough for that family’s use. Household use includes cooking, drinking, and bathing; home gardens rely on rain.

Heat is the other challenge. From October to December of 2015, much of South Africa was in the grip of a heat wave. Last winter (May to October), Mrs. Mahlaule and fellow farmers at a women’s cooperative vegetable farm complained that “you can’t even tell it’s winter anymore”: while much of the world worries about the dire effects of a two-degree rise in global temperature, inland regions of Southern Africa can expect a five-degree rise by 2050 unless global greenhouse gas emissions are reduced dramatically. High temperatures are wreaking havoc already. Pumpkin leaves, a favourite local green, are shrivelled and unmarketable within an hour of watering. Pests that used to die off in cooler weather now flourish year round. Indigenous plants provide useful alternatives in dry years, but they too are susceptible to pests. People who can little afford it are forced to turn to less nutritious store-bought food. 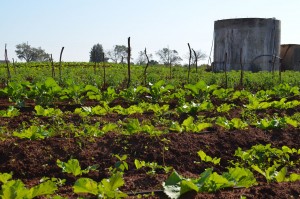 Spinach flourishes with drip irrigation. A cistern collects rainwater and holds pumped water for daily use.

Mrs. Mahlaule and her co-workers find solace at their farm. They founded the vegetable project in another legendary drought year, 1992. “The farm chased kwashi from our village,” says farmer Mamayila Mkhawana, referring to kwashiorkor and other forms of malnutrition. For over two decades, using water-conserving drip irrigation, these farmers have been providing nutritious, reliable, and affordable food to people from Jomela and neighbouring villages. They grow “exotics” including tomatoes, onions, three varieties of spinach, sweet potatoes, green beans, and butternut squash following largely agro-ecological practices.[i] Extension workers generally teach conventional growing methods, but the women can’t afford chemical fertilizers and pesticides. They work to rebuild the soil with organic material, nourish their crops with chicken manure tea, and avoid pest-prone plants like cabbage.

In the context of climate change, this kind of sustainable local initiative is crucial – not just for people’s health, but for broader food security. Healthy local food systems can support community development, providing food and jobs where people live. A growing body of research shows that agro-ecological methods produce food systems more resilient to the effects of climate change than conventional agriculture. For instance, soils rich in organic material are better able to retain moisture and less prone to wind erosion; decomposing organic matter feeds the soil much more sustainably than fossil fuel-based fertilisers; and encouraging growth of indigenous edibles among commercial crops helps protect biodiversity.

Access to water lies behind a growing number of political and environmental crises around the world. The political and the ecological become more closely intertwined as desperation deepens. It is past time to imagine what climate change will look like in our own lives. As people in Jomela say, “don’t close the well after you drink”: water is a common resource. Its protection demands all our efforts.

Elizabeth Vibert teaches history at the University of Victoria. With the assistance of research collaborator and translator Basani Ngobeni, she is writing a book about the women’s farm in Jomela. Elizabeth and filmmaker Christine Welsh and Mo Simpson are making a film, ‘The Thinking Garden.’ The name of the village has been changed to protect farmers’ privacy.

[i] For overviews see Laura Silici, “Agroecology: What it is and what it has to offer,” IIED (International Institute for Environment and Development) Issue Paper June 2014; Olivier de Schutter, “The Transformative Potential of the Right to Food,” Final Report of the UN Special Rapporteur on the Right to Food, Jan. 2014.

One thought on “Climate Change on the Ground”