Editor’s Note: This was published on the NiCHE website earlier this week and is a part of a monthly series showing the work of the Sustainable Farm Systems project

Blessed with plentiful sunshine and rich soils, Guatemala exports large quantities of coffee, bananas, sugar and more to the United States, Canada, and Europe. Our grocery stores are stocked with fresh tropical produce, but few consumers are aware of the social and environmental costs of the food we consume. The immense productivity of Guatemala’s export sector is underwritten by deforestation, the heavy use of pesticides and fertilizers, and the exploitation of workers. Guatemala also has one of the highest rates of chronic malnutrition in the Americas: many rural Indigenous families subsist on a simple diet of corn and beans that lacks adequate protein and key vitamins. Though children often do not feel hungry their young bodies are maimed by inequality: they suffer from stunting and high rates of infant mortality. Yet Guatemalan peasants are astute farmers who, though often lacking education and financial means, are able to coax remarkable yields out of the meagre quantities of land at their disposal. The Food and Agriculture Organization estimates that 1.86 percent of Guatemala’s population owns over 56 percent of the country’s arable land. Why do so many people go hungry in a land blessed with fertile soils, an extraordinary diversity of micro-climates and abundant rainfall? 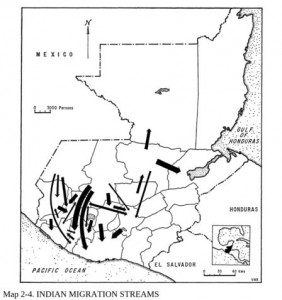 In 2008, I lived and worked in a series of rural, highland communities. I helped where I could while observing and learning the extent of my own disconnection from rural life. I made many friends, but slowly people started to leave town. When I asked where they had gone, people replied vaguely: ‘la Costa’. I later learned that migration to work on coastal coffee, sugar, and cotton plantations was a yearly phenomenon. Throughout the twentieth century Indigenous peoples migrated to the Pacific Coast, driven by the need for extra income to pay for medicine, small loans, clothing, and education. Even in the 1970s, it was not uncommon for whole families to work collectively on cotton and coffee plantations in order to make a small profit. Historian David McCreery aptly describes this seasonal migration as a cycle of “‘reproduction-destruction’” where “villages functioned as labour reserves for the export economy, reproducing cheap labour power and maintaining it in the off season.”[1] My doctoral research explores the social and environmental history of agrarian modernization in Guatemala from 1944 to 1980. This was a period of civil strife and growing inequality that was crucial to Guatemala’s transition from an organic to an industrial agrarian system.

Twentieth-century reformers and activists challenged the social, environmental and financial wisdom of Guatemala’s dependency on plantation agriculture. The most significant attempt to remake Guatemala’s agrarian landscape occurred between 1944 and 1954, an era known as Guatemala’s ‘Ten Years of Spring.’ After decades of dictatorship, Guatemalan reformers came to power determined to modernize and diversify the country’s ‘feudal’ agrarian landscape. The Ministry of Agriculture worried that dependency on coffee exposed it to market fluctuations. They also criticized peasants for dedicating productive land to subsistence agriculture. Peasants who picked coffee often planted corn in their highland communities, because it could be easily tended while they were away. 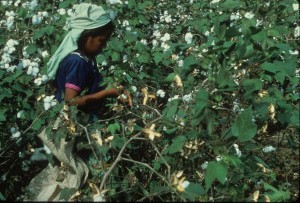 The Ministry of Agriculture blamed subsistence corn production for deforestation and soil erosion in the highlands, which heightened the risk of destructive landslides and floods for lowland farms. The government set up experimental farms and extension agents to demonstrate the productive potential of modern agriculture using the tools of the nascent Green Revolution: hybridized seeds, mechanization, pesticides, and fertilizers. The Ministry hoped that industrial-scale farms could produce enough corn to drive down prices and encourage peasants to grow more marketable and ecologically appropriate crops.

These modernization initiatives culminated with the Agrarian Reform Law of 1952, which distributed thousands of square kilometers of prime agricultural land to peasants. Most of the expropriated land was located on Guatemala’s Pacific Coast. With state support, peasants cleared and planted their new land with corn but also cotton, rice, and sesame. Although large landowners predicted economic ruin, Guatemala had record coffee yields in 1953 and reversed its corn deficit, allowing it to export corn. Peasants engaged with the modernization process, regularly sending letters asking the Ministry of Agriculture for tractors, hybridized seeds, pesticides, and technical advice. 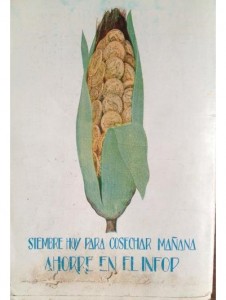 The radical land reform experiment was cut short by a U.S.-backed coup in 1954. The new government returned most of the expropriated land to large landowners. Although peasants were technically able to appeal the return of land, many abandoned unharvested crops and fled fearing persecution as communist sympathizers. Within weeks, food shortages became acute and the Guatemalan government urgently requested food aid from the United States to help stave off famine. Food aid encouraged landowners to ignore basic grain production and focus on export agriculture. Though established landowners rejected the land reform, they benefited tremendously from the technical reforms undertaken by between 1944 and 1954.

The heightened productivity of agriculture after 1954 was evident in the explosive rise of cotton, which was a relatively minor crop prior to the coup but became one of Guatemala’s top exports by the 1970s. Cotton was predominately grown on the Pacific Coast, often on land cleared by peasants during the Agrarian Reform. Land planted with cotton produced very well for five to seven years before yields flagged, requiring fallowing, crop rotations, or fertilizers to sustain yields. Most farmers preferred to open new land up for cultivation while allowing older land to produce at reduced quantities. The result was an impressive, but ephemeral cotton boom that coincided with Guatemala’s civil war which raged between 1960 and 1996. The meteoric rise of cotton was briefly interrupted by a collapse in the 1960s, when farmers ran out of new land and were forced to invest in irrigation, fertilizers, and pesticides to artificially sustain cotton production. 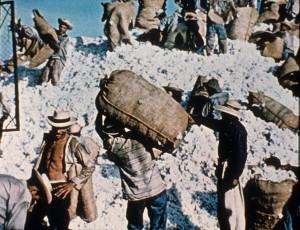 Indiscriminate and frequent spraying of pesticides proved especially dangerous for human health and the environment. Pesticide poisonings were common throughout the 1960s and 1970s, and international studies found that the breast milk of women in Guatemala’s cotton zone contained 18 times the ‘safe’ limit of DDT. In 1977, a United Nations report found that milk from cattle grazed near cotton farms had 90 times the amount of DDT found in U.S. livestock.

Cotton is an extreme example of the environmental and social costs associated with unregulated export agriculture in Guatemala. In her moving autobiography Rigoberta Menchú, a Mayan woman who won the Nobel Peace Prize for her activism, recorded the death of her two brothers on a cotton plantation: one died of pesticide poisoning and the other from malnutrition. Menchú expressed particular concern for children in Guatemala, writing that she was “both angry with life and afraid of it, because I told myself: ‘This is the life I will lead too; having many children, and having them die.’”[2] Landowners stopped planting cotton in the 1980s, citing untenable increases in the costs of pesticides and fertilizers. Yet former cotton growers quickly transitioned to new crops, including African Palm, which has become one of Guatemala’s most important non-traditional agricultural exports. The productivity of Guatemalan agriculture continues to rely on minimizing the costs of production at the expense of labourers and the environment. In June 2015, a major river system in Guatemala’s Petén was contaminated with pesticides used to produce African Palm causing a massive fish die off.

Historical research helps contextualize agricultural industrialization in Guatemala, highlighting moments when reformers and Indigenous peasants worked together to create a more sustainable and equitable agrarian landscape. Guatemala’s agrarian reform offers a fleeting glimpse of a more diversified and sustainable farm system. Yet the rise of cotton and rapid turn to African Palm suggests that Guatemala’s industrial agrarian regime has achieved remarkably resiliency by off-loading the costs of production onto labourers and the environment. Guatemala’s soaring productivity continues to be underwritten by bracing inequality and a disregard for the ecosystems that surround and permeate the farm.

Patrick Chassé is a Ph.D. Candidate studying Environmental and Latin American History at the University of Saskatchewan. His dissertation examines the environmental and social consequences of agrarian modernization in Guatemala, from 1944 to 1980. He is also a member of the Sustainable Farming Systems Project, based at the University of Saskatchewan.