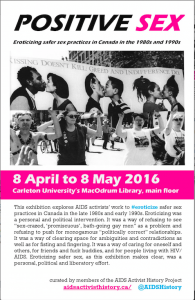 Today if you walk into MacOdrum Library at Carleton University in Ottawa, you might be forgiven for taking a double-take. Up on the wall in the main foyer is a striking display that is intended to provide a deeper understanding of what AIDS activism in Canada has looked like since the 1980s. “Positive Sex: Eroticizing Safer Sex Practices in Canada in the 1980s and 1990s,” was curated by Janna Klostermann, Sarah Rodimon and Alexis Shotwell of Carleton University. Focusing on the people on the ground who struggled with inflexible bureaucracy and homophobic stereotypes to promote safer sex practices across Canada, the exhibit features a selection of materials, photographs and quotes that are challenging and provocative. One example from the exhibit is a poster produced by ACT UP Montreal in the late 1980s that openly discusses a range of topics from oral sex to sado-mascochism. In addition to recommending lubricants and proper care of sex toys, the poster displays a colourful array of illustrations, including a satirical (and explicit) take on “phone sex”, alongside a couple playing with a condom turned friendly puppet.[1] When I spoke with one of the curators, Janna Klostermann, she mentioned that she wondered if this particular panel would be considered appropriate by MacOdrum Library, but was pleased to find library staff supportive of the ideas the curators wanted to convey by displaying it.

The exhibit captures just a glimpse of the stories that are apart of the AIDS Activist History Project (AAHP). Since 2014, this group of researchers have collected oral histories from coast to coast of AIDS activists who were particularly influential in the 1980s and 1990s. As the compelling interviews make clear, these individuals “put their bodies on the line” as the website explains, to critically shift the conversation around AIDS in Canada. AAHP joins the ranks of other powerful oral history projects, including the ACT UP Oral History Project and the African Americans AIDS Activism Oral History Project, that have all made it their prerogative to document the history of grass-roots AIDS activism.

The exhibit may not at all look like the sexual education many Canadians have or continue to receive in public schools. Indeed, the materials featured provide an interesting corrective to some of the assumptions raised within both recent and historic controversies over sexual education, namely that “education” should be about repressing sexual desire and practices, not articulating them and definitely not promoting them. The “abstinence-only” education that is still widely popular and heavily funded in such countries as the United States, for instance, has consistently argued that encouraging youth to limit sex to relationships between two heterosexual partners within the confines of a monogamous marriage is the only way to prevent STIs and unintended pregnancy, claims that have been shown again and again to be completely erroneous.[2]

Other less willfully ignorant education and prevention programs have not been so extreme, but far from perfect, mainly due to a tendency to overlook wide segments of the population—the consequence of which has been much higher rates of AIDS and other sexual health problems among Indigenous, LGBTQ and low-income communities. In fact, the tendency to ignore the populations who are the most affected by AIDS, as well as passing over or even blindly condemning sexual practices that fall outside heterosexual monogamy, has been more common in Canada and abroad than one might think over the years, gaps that reflect the persisting stigma of the disease itself.[3]

The consequence has been a number of grass-roots initiatives that have gone where other campaigns have not. Indigenous communities in Canada and beyond, for instance, initiated AIDS prevention strategies that took a much more comprehensive approach to sexual health, including acknowledging the historic role of colonialism and reasserting traditional knowledge of non-binary gender identity and sexuality.[4] 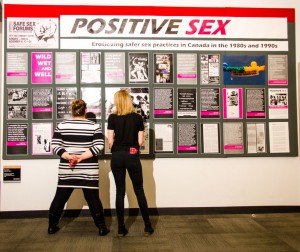 The exhibit “Positive Sex” displays yet another array of initiatives and activism carried out by people who witnessed the devastation of AIDS firsthand and, as a result, wanted to push the boundaries of what sexual education could look like in Canada. As Klostermann has written, these activists “promoted safer sex practices without compromising sexual freedom and without othering people living with HIV/AIDS.”[5] Eroticism was key to their efforts as it allowed them to speak about sex and its risks frankly, while successfully integrating safer-sex practices within marginalized sexual communities. Much like the AIDS Activist History Project from which it emerges, the exhibit attends to these histories through displaying the work of Canadian activists who fundamentally re-shaped the discussion around AIDS at a critical moment.

The exhibit opened on April 8th to honour Youth HIV and AIDS Day and continues until May 8th, giving those who have not yet had a chance one more week to take a look. Even when it does come to an end, however, this may not be the last exhibit created by the AIDS Activist History Project, Klostermann assured me, as the group continues to find ways to communicate these histories of grass-roots activism to broader audiences.

Beth A. Robertson is a feminist historian of science, medicine and technology and one of the co-editors of ActiveHistory.ca.

[4] Scott Lauria Morgensen, “‘Together We Are Stronger’: Decolonizing Gender and Sexuality in Transnational Native AIDS Organizing,” Spaces Between Us: Queer Settler Colonialism and Indigenous Decolonialization (Minneapolis: University of Minneapolis Press, 2011), 195-224.

[5]Janna Klostermann, “On stories and materialities in AIDS activists’ work to eroticize safer sex,” 5. Thanks so much to Janna for providing me with this unpublished paper, as well as for giving me a personal tour of the exhibit itself.