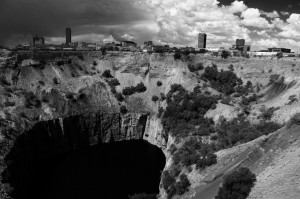 Today, the complete Big Hole experience begins with a short film, Diamonds and Destiny, which tells the “realistic” story of the mine’s early existence “through the eyes of two fictional characters of the time,” a white travel writer and a black labourer. The experience continues with a short tour of the underground mine; a visit to the viewing platform perched overlooking the Big Hole; and, finally, a visit to the mine museum and the heavily guarded diamond display. Visitors are also invited to take a trolley ride or walk around the restored old town with its blacksmith, garage, “High Class London Tailor,” milliners, and other shops. 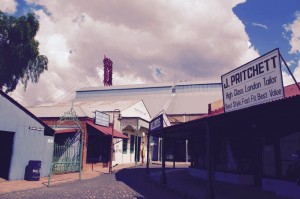 Studies about the way heritage sites and museums can silence, sanitize, gloss over or forget certain histories, thereby condemning them to oblivion, while bringing others to the fore, abound, so it should come as no surprise that the Big Hole museum does the same, silencing the story and struggles of black workers in favor of a narrative that highlights white ingenuity and capitalism and the triumph of these over nature. From the time the first diamond was accidentally discovered in 1866, the challenges Cecil Rhodes, Barney Barnato, and other mining magnates faced in extracting diamonds from the earth, and in eliminating the theft of those diamonds, were quickly overcome. New mining and extraction techniques were developed, as were new techniques to prevent theft. As the museum tells the story, the success of these new strategies generated millions in profit for De Beers. This wealth is very visibly displayed in the diamond vault, which shows visitors dozens of diamonds of all colours, shapes, and sizes extracted from the mine over the years.

Largely absent from this story are the 10,000 black workers who dug the Big Hole and laboured to extract diamonds from the volcanic rock. The overall story is that the hole was dug by hand. Yet what colour were those hands? Whose bodies did those hands belong to? The work of the thousands of black labourers who actually dug and extracted diamonds, and so created wealth for De Beers and South Africa, is hardly given its due.

When black workers’ presence—though not their contribution—is recognized, the harshness of their life outside and inside in the mine and in its increasingly prison-like living compounds is glossed over. The highly romanticized Diamonds and Destiny briefly confirms that thousands of black workers labored in the mine, and that many of them, like the (secondary) main character in the film, Mojabilo Motswena, traveled great distances from home and family to work. The placard “A Day in the Life of a Miner” explains that “many Africans were already accustomed to migrating for work.” 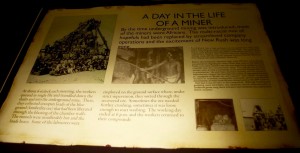 There is no mention of why Africans were accustomed to migrating, no mention of white farmers’ insatiable hunger for land which pushed many blacks off their land and into the mines, and to white-owned farms, where they worked in often slave-like conditions. There is no mention of the hardship of being away from home and family, or the hardship those left behind faced. The dark side of “already [being] accustomed to migrating for work,” and of capitalism, is sanitized in favor of a bland narrative which actually offers few details about the 12 hours a day miners spent working.

Life in the mine was difficult. Days were long. Burdens were heavy. Temperatures, especially underground, were high. This is all that “A Day in the Life of a Miner” says. That many workers died while working in the mine is left out of the museum’s narrative. Diamonds and Destiny, however, does not silence the physical dangers of being a mine worker completely; the film mentioned that one worker was maimed in an accident. He, however, started a business cooking for other workers and made more money than he ever could have as a miner. The accident was, thus, a blessing in disguise for the miner-turned-cook, though this was certainly not the case for the many workers who were left permanently unable to find work as a result of the injuries they suffered in the mine.

“A Day in the Life of a Miner” offers more details about the time when miners were not toiling in the mines. After all, it wasn’t “all tears in the compounds….labourers found entertainment in traditional games, song, dance, and sport.” Indeed, “Christmas was a particularly festive occasion.” How Christmas (a holiday imposed on blacks by missionary work) could be festive in something that resembled a concentration camp, which is how the placard describes the compounds, is not explained.

In the midst of this silencing and sanitizing, there is a bright light, a small hint that the mine’s narrative itself has big holes in it. A large, carved granite commemorative block was installed in 2009 on the viewing platform. The block was carved “In loving memory of the members of the Royal Bafokeng Regiment who died while working as labourers at the Kimberly ‘Big Hole’ mine. They toiled here to earn money for their people so that the land which had been forcibly taken from Bafokeng could be bought back.” Here, it is clear that there is more to the mine’s otherwise happy history of white perseverance and success. Land was forcibly taken from the country’s original inhabitants. They had to work in the mine to try to buy it back, though it was rightfully theirs. Many died in the process. This is the history of the mine. This is the history of South Africa.