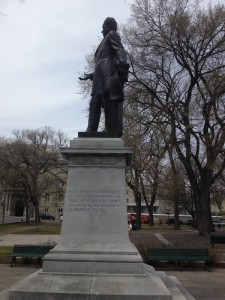 These words captivated my attention a few months ago as I walked across Parc Montmorency, the site of the old parliament buildings in Quebec City. They are found on the footing of a statue of George-Etienne Cartier, one of the better known politicians involved in crafting the British North America Act. What a succinct summary of Confederation, I thought: “In order to assure our existence, we must grasp onto the Land and leave for our children the language of our ancestors and ownership of the soil.”

The words struck a chord, I think, because I was in the park to eat my lunch and read a bit of Thomas King’s The Truth about Stories, the book Huron has chosen for this year’s first year common reading program. Repeatedly, in returning to the phrase: “the truth about stories is that that’s all we are,” King challenges his audience to think about how we situate ourselves in the world and the stories we use to construct it. The story invoked by this inscription is one of a national beginning. It can be read in at least two ways that both help us understand our present moment as well as point us towards areas where our practice as historians may need to change.

First, the inscription can be read as I suspect it was intended; as a testament to Cartier’s fairly pluralistic views that Confederation would ensure francophone survival in an anglocentric North American political culture. For him, land and language were central to preserving Quebec’s distinct culture. Another reading of this epitaph, however, picks up on its silences. It too is instructive on the intentions that underpinned Confederation. Here, clearly articulated, is a succinct affirmation of the repopulation of northern North America embodied in Canadian Confederation.

The latter interpretation was the one I took from the statue on that day in mid-May. Standing at Cartier’s feet, I interpreted the words like this: “In order to assure the existence of a colonizing population, we must take the land, maintain our language, and ensure that The Law protects our children’s property.” In this reading, the story told by the Cartier monument is a story premised on the idea of terra nullius, or empty land. Its words assume that the Land is available for the taking, without any prior relationships (or legal systems) existing within it.

Since that day, these words have stuck with me. There is much truth in the dual readings of this epitaph and some important lessons, I think, for those of us who work in fields related to Canada’s history and heritage. Sticking with Thomas King’s evocative phrase, “the truth about stories is that that’s all we are;” it is important to recognize that in Canada the definition of who “we” are has changed significantly since the 1950s, as have the stories that Canadians tell about this place and the peoples who have made it.

Indigenous elders, scholars, activists and politicians who have reclaimed, and are reclaiming, spaces within the public sphere from which they have been mostly silenced for nearly two hundred years, have made one of the most significant changes in this discourse. Through resistance to statements and histories like the one emblazoned on the Cartier memorial, these people have tirelessly worked to change the public conversation in Canada. People like Frank Calder, Mary Two-Axe Earley, Harold Cardinal, Erica Violet Lee and many others have challenged Canadians to re-examine the stories we tell about others and ourselves. 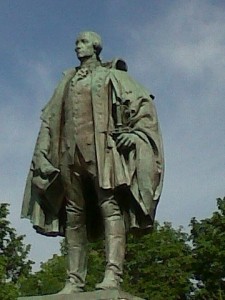 Perhaps the most topical evidence of this transition is the resonance Mi’kmaw Elder Daniel Paul has achieved in pointing Nova Scotians towards the problematic presence of Edward Cornwallis – the founder of Halifax – within that province’s public sphere. After more than two decades of advocacy, often focused on Cornwallis’s statue in downtown Halifax, the bounty Cornwallis placed on Mi’kmaw heads has finally led to his slow removal from the provincial landscape (though the statue still stands). Similar examples are taking place across Canada. Fuller North American histories now resonate throughout the public sphere, challenging the “two nations” vision espoused on Cartier’s memorial.

As a Canadian historian, though, the words of Cartier’s epitaph have challenged me to think more deeply about the construction of this field as a whole. After leaving Quebec City in May, these words have oriented my attention towards how little impact some of these changes have made in some areas of Canadian historiography. At a recent round table on Confederation (a subject about which discussion will undoubtedly increase over the coming months), I was surprised that colonialism and Indigenous peoples were not a principal area of discussion (though one panelist did address the subject directly and substantively). Though it is true that no Indigenous people were invited to the table at Charlottetown or Quebec, the inscription on Cartier’s memorial suggests just how much was at stake during these negotiations.

Likewise, over the past two years I’ve been working on a project that has led me to explore the lives of three elite Lower and Upper Canadians: Andrew Stuart, John Neilson and Egerton Ryerson. What I have found reinforces a conclusion Don Smith has made about Ryerson’s relationship with Kahkewaquonaby (Peter Jones); these three men had substantive and important relationships, and in some cases friendships, with Indigenous neighbours. Furthermore, they were all involved with, and highly influential in pushing for, public education and moderate political reform during the first half of the nineteenth century (incidentally, though he is not part of my project, we could also add Joseph Howe to this list).

Traditionally in the historiography, these are neither marginal men, nor marginal subjects. So I took to the library to begin some background reading. As a historian primarily of the seventeenth and eighteenth century, what I found surprised me. There is almost no literature that addresses these relationships or their implications. Furthermore, if we set aside books that directly focus on topics related to Indigenous peoples, like Don Smith’s Mississauga Portraits, reference to First Peoples in the historiography of this period seems to be scant.

To verify my observations, I took a look at the indexes of fifteen relatively prominent books that cover Lower and Upper Canadian history, with an orientation towards the early-nineteenth century reform movement and history of education. Of those fifteen 200-300 page books, only 106 pages directly referenced Indigenous peoples (many only in passing). Three of those books cover more than half of the total references (Cecilia Morgan’s Public Men and Virtuous Women; Colin Read’s The Rising in Western Upper Canada; Paul Axelrod’s The Promise of Schooling). A more verifiable study is certainly needed, but what this suggests is that for subjects seemingly unrelated to Indigenous peoples, discussion of the broader historical context, whereby Indigenous lands were actively repopulated by Europeans, remains minimal.

The central point here is not to chastise historians working in these fields, or to suggest all Canadian history must address the history of Indigenous peoples. It is quite possible, even likely, that many historical subjects relevant to Canada’s nineteenth-century history were not shaped by Indigenous peoples. It is equally true that the politicians who crafted the country’s first constitution did not consult or include Indigenous leaders. And yet, the broader historical context in which the events of the nineteenth century took place was one that involved the near complete repopulating and legislating of Indigenous Lands and Peoples by more-or-less foreign powers. Surely this important transition requires more than a page or two of discussion. Though this type of reflection is often implied in many of these works, without explicit acknowledgement of Canada’s colonial legacy our projects ring out like the words below Cartier’s feet in Parc Montmorency: Canadian history begins with Europeans and their legacy. No need to think about Indigenous peoples, we know their influence was minimal and their pasts simply didn’t matter to the subject at hand.

Building on the analysis of Canadian history textbooks I wrote about last November, my survey of these monographs suggests a similar conclusion: it remains possible for our students to navigate Canada’s past without sufficiently grappling with the country’s colonial and Indigenous histories. There remains a disconnect, I think, between historiographies of Indigenous peoples in what became Canada and other historiographies of Canada written about the same period but not focused on subjects clearly identified with Indigenous peoples.

This is one of the reasons why, I think, for historians of Canada, we need to collectively and publicly situate ourselves, and our research, within this broader context of Canada’s colonial legacy, even if our research seems unrelated to these subjects. One way to do this is to acknowledge the Land and First Peoples each time we begin telling our stories and teaching our methods. Though there have been some important critiques of this practice – as a settler move to innocence and as a practice that risks framing reconciliation (as opposed to restitution) as easy to accomplish – in the Canadian history classroom or lecture (especially on subjects seemingly unrelated to Canada’s colonial practices) such statements hold promise for the transformation and structural change that lies at the heart of these critiques. Doing so reminds our audiences, and ourselves, of the silences implied by our work.

Much like my experiences with the words inscribed on Cartier’s memorial, when we frame and preface our work within the matrix and evolution of relationships that have defined (and continue to define) practices of colonialism in Canada, we create space for new and divergent perspectives on the past. More importantly we create a context in which the silent, but real and powerful, stories implied by our work and methodologies are more likely to be exposed, challenged and discussed. Though this might make us uncomfortable, its collective promise is one that fosters a richer, more accessible and more nuanced understanding of the past and a critical reflection on the methods used to understand it.

My translation: “In order to assure our existence, we must grasp onto the Land and leave for our children the language of our ancestors and ownership of the soil. // We, Franco-Canadians, we are one of the branches of the Confederation tree; it is for us to understand and work for the common good. // In a country like ours, we must ensure all rights are protected and that all beliefs are respected.”

One thought on “Acknowledging the Land and the People: A Practice for all Canadian Historians”