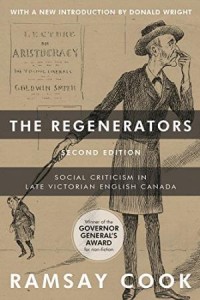 In Montreal’s Place des Arts to accept the 1985 Governor General’s Literary Award for Non-Fiction, Ramsay Cook said that he was honoured to be recognized alongside poets, playwrights, and novelists, “which is where a historian should be.” Indeed, it was one of his firmest convictions that history was also an art and that historians had an obligation to write well: “Unscientific as it may sound, language and style are part of the very essence of the historian’s craft.” After reading the first draft of an article I had written about him, he gave me two pieces of advice from his days as a cub reporter on the sports beat in the late 1940s: avoid jargon and don’t use a five dollar word when a five cent word will do the trick.

From his inauspicious start at the Morden Times, he became a prolific writer, a brilliant essayist, and a tough but fair critic with a distinctive and recognizable style marked by clarity, generosity, erudition, and the careful use of the epigraph. He also became a respected public intellectual, someone who could draw on the past to deepen our understanding of the present. From a place of civic obligation and moral imperative, he explained French Canada to English Canada, he entered Canada’s thirty year constitutional debate, and he upheld the university as a place for curiosity-driven research. He wasn’t afraid to drop the gloves either, especially on the subject of nationalism and its excesses: Canada’s problem wasn’t too little nationalism, he always said, it was too much. It was a theme he returned to in one of his last interviews when, on national radio, he defended the writing of history by historians, not by governments, because governments, for their own partisan or nationalist reasons, present a version of the past as if it were the only version.

Over the course of his long career, he was made a Fellow of the Royal Society and named an Officer of the Order of Canada; he won the Tyrell Medal, a Guggenheim Fellowship, and the Molson Prize; and as a professor at the University of Toronto and York University he supervised a generation of graduate students. Maintaining close relationships with many of them, he followed their careers with avuncular interest and was always pleased when they sent him a copy of their latest book. Left unfinished on his desk was his own book, a collection of essays and reviews from over fifty years of thinking and writing about Canada.

George Ramsay Cook was born on 28 November 1931 at “the Nursing Home of Mrs. R.W. Wood,” according to Saskatchewan’s Alameda Dispatch. But according to family history the local midwife got the job done during an early prairie blizzard. As the son of a United Church minister and a United Church minister’s wife, Cook had a peripatetic childhood, living in a succession of Saskatchewan and Manitoba towns: Alameda, Raymore, Wynyard, Brandon, and Morden. “Canadians born on the prairies are especially fortunate in at least one respect,” he wrote, because “their childhood has been immortalized” in Who Has Seen The Wind, a novel about one boy’s coming of age in a small prairie town in the 1930s. Later he named his sailboat The W.O. Mitchell.

In a series of interviews for a book that I am writing about him, we spent a lot of time talking about the prairies, how they shaped his view of Canadian history, and how they instilled in him a love of nature, especially birds. With the few pennies he made from delivering the Saskatoon Star-Phoenix in Wynyard, he sent away for bird reproductions from the Audubon Society. When they arrived, he pored over them, teaching himself how to identify birds by their distinctive markings. He also collected eggs, blew the yolks out, and carefully stored them in a sawdust-filled box. “I always claimed that I collected only one egg per species, but I often found a better example in some gopher-skin-strewn hawk’s nest high in a tree.”

After graduating from Morden’s Maple Leaf Collegiate in 1950, Cook went to United College in Winnipeg with vague ideas of becoming a lawyer. But history quickly caught his imagination: here was a language—a set of ideas and tools—that allowed him to understand the world. Recognizing his innate talent, his professors urged him to undertake graduate work. At Queen’s he studied with Arthur Lower, writing a thesis on the suspension of civil liberties during the Second World War. At Toronto he studied with Donald Creighton, writing a thesis on the journalist J.W. Dafoe, longtime editor of the Winnipeg Free Press. Like chalk and cheese, Cook and Creighton could not have been more different, especially on the subject of French Canada, yet their relationship grew into a long friendship based on a genuine fondness and a shared love of literature. When Cook published his first book in 1963, The Politics of J.W. Dafoe and the Free Press, he dedicated it to his parents and thanked his thesis supervisor whose “encouragement” and “high standards” had meant the world to him.

As a young professor Cook found himself supervising graduate students, including Michael Bliss who remembers him as a “short, fiery, but friendly red-headed historian from Manitoba” and as “an inspiring teacher and scholar.” In pushing his students, he pushed the boundaries of Canadian historical writing. And like all good teachers, he allowed himself to be pushed by his students. He wrote a new introduction to The Woman Suffrage Movement in Canada; he co-edited with Wendy Mitchinson The Proper Sphere: Woman’s Place in Canadian Society; and he championed the new labour history. Greg Kealey was his student exactly fifty years ago, in 1966, and still counts him as an early and important influence on his career. Their many conversations led to a shared and convivial membership in what they “jokingly termed the Jimuel Briggs Society, named in honour of the Toronto socialist intellectual Phillips Thompson,” a character and a half who sometimes wrote under the pseudonym Jimuel Briggs.

Cook’s intelligence was unstoppable. Interested in social criticism, religion, and the thorny question of secularization, he decided to write a book on Protestant theology, the social gospel movement, and its promise to build God’s kingdom in Toronto’s Ward and Winnipeg’s North End. Republished just a few months before he died, The Regenerators remains an intellectually challenging but nonetheless fun book, full of true believers, free thinkers, single taxers, socialists, and theosophists. He was touched that the University of Toronto Press wanted to make it available to another generation of readers and, when it arrived, he was delighted with job it had done in terms of design and layout.

As a visiting professor at Yale University in 1978-79, he immersed himself in the “new and very exciting” fields of aboriginal and environmental history which led to a series of papers, including “Cabbages Not Kings: Towards an Ecological Interpretation of Early Canadian History” and “Donnacona Discovers Europe” which turned the idea of discovery on its head. Its last line still cuts to the chase of the Indigenous-non-Indigenous relationship. “The French, Donnacona’s people might have concluded, ‘are wonderful thieves and steal everything they can carry off,'” including Donnacona who was kidnapped and taken to France where he died.

And with that Donald Creighton’s Laurentian dream of nation had been extinguished and replaced by Ramsay Cook’s notion of limited identities, a phrase he coined in 1967 but which Maurice Careless made famous a few years later. There was something almost patricidal about it, the student surpassing the supervisor. “Instead of constantly deploring our lack of national identity,” Cook argued, “we should attempt to understand and explain the regional, ethnic, and class identities that we do have. It might be that it is in these limited identities that ‘Canadianism’ is found.” Of course, limited identities was more than a phrase. Born on the prairies—where, Cook said, ethnic, religious, and linguistic difference was “the normal state of things”—it was an idea that shaped the un-writing of Creighton’s Canada and the re-writing of a new Canada. It was also the promise of a more tolerant, open, and plural future.

Because he had led an interesting and important life, a number of publishers invited him to write his memoirs, but he politely declined. He always said that if he ever wrote his memoirs he hoped that they would be like the memoirs of the French writer François Mauriac, that they would be “about the books he’s read, the painters he’s liked, and the plays he’s seen.” Strictly speaking that wasn’t entirely true because he did write a memoir of his friendship with Pierre Trudeau. But it was mostly true. More interested in books and in art than in himself, he couldn’t understand why anybody would be interested in him.

But I was. In fact, we had arranged another interview shortly before he fell ill. Dates were set; flights were booked; and questions were sent. He seemed pleased, telling me that they were challenging and joking that he didn’t know he was going to have to sit for another PhD oral exam. Once had been enough. Our goal was to talk about the writing of history and just what a complicated business it can be; it was to talk about the animating themes of his career, especially nationalism, identity, French Canada, religion, art, and Contact; and it was to talk about biography and the writing of biography. He served as the General Editor of the Dictionary of Canadian Biography for nearly two decades and once described it as “a memory palace.” Still, he said, I hadn’t asked him about his wife Eleanor, also an accomplished academic. Her influence on his career had been immeasurable. It was the last e-mail he sent to me.

Clearly, family mattered to him. When our conversations drifted off course, we talked about our kids. He was obviously proud of Maggi and Mark, their chosen careers, and their many accomplishments. And he bragged about his grandchildren, Katherine and Joshua, telling me stories about their athletic pursuits. Because he had played a ton of sports as a kid there were several references to him in the Morden Times. After one Labour Day doubleheader, the paper nicknamed him “Speedy Ramsay.” When I sent it to him, he was thrilled. So too, he said, were his grandchildren. “If you discover anything more about my athletic prowess, be sure and let me know so that I can keep impressing the grandkids!”

When I learned that he had died I went for a long run. I thought a lot about him, his career, our conversations, and our conversation that didn’t happen. Like J.W. Dafoe, “he lived by his mind and his pen.” But he also lived by his heart. Literature and art weren’t incidental to him, they were central to who he was. So too was his family. To cheer myself up, I focused on the birds, something I think he would have appreciated. I counted Goldfinches, Redstarts, Pine Siskins, Chickadees, Chipping Sparrows, Starlings, and, of course, several Robins on my route along the Nashwaak River. About ten kilometres outside of Fredericton, I heard the distinctive song of a White Throated Sparrow: O-oh sweet Canada, Canada, Canada. For a second, I imagined it was Ramsay. Grief does strange things. Still, is there a more Canadian bird than the White Throated Sparrow?

Don Wright is a professor in the Department of Political Science at the University of New Brunswick and is currently writing Ramsay Cook’s biography. To correct a handful of small errors, this essay was slightly revised on 9 August 2016.