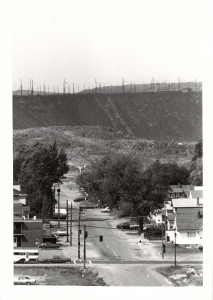 A view of the slag storage area, from Gutcher Street in Gatchell, ca. 1970. Anonymous local photographer.

Much of the industrial ruins resulting from nearly 130 years of nickel mining in Sudbury, Ontario, are now hidden from plain sight, camouflaged under a successful re-greening program that has led to the planting of over nine million trees, and the clean-up of many area lakes and thousands of hectares of soil. And yet, despite this invisibility, vestiges of the industrial past continue to exist and do harm. “Making connections where they are hard to trace,” as Ann Laura Stoler reminds us, “is not designed to settle scores but rather to recognize that these are unfinished histories, not of victimized pasts but consequential histories that open to differential futures.”[1] Understanding the visible and invisible tolls that heavy industry has taken on residents’ bodies requires a willingness to explore these unfinished histories, a subject that is deeply implicated in an Environment Canada investigation in the region.

On October 8, 2015, Sudbury’s local media received an anonymous email stating that Environment Canada and the RCMP had spent the day “raiding” the headquarters of Vale (formerly Inco Limited) in Copper Cliff, a small nickel mining community just west of Sudbury, searching for files that pertained to a 2012 federal investigation into alleged Fisheries Act violations.[2] Nearly three weeks later, details about this investigation became public, revealing that the local mining company has been accused of allowing industrial effluents to leach into a number of local waterways since at least 1997, and perhaps even going as far back as 1963. The CBC reported that the Environment Canada warrant “accuses the company of allowing ‘acutely lethal’ seepage from the smelter waste piles into water frequented by fish, and of knowing about the leakage for years.” As an oral and public historian actively engaged in a SSHRC-funded project entitled Mining Immigrant Bodies: A Multi-Ethnic Oral History of Industry, Environment, and Health in the Sudbury Region, which examines the “inescapable ecological” relationships that have been forged between Sudburians and the landscape since the postwar period, I have spent the last year listening to stories that intersect in important ways to this latest investigation.[3]