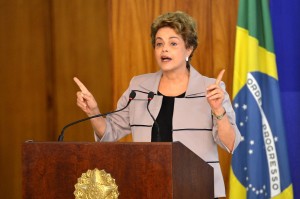 2016: In April and May, a large majority of federal deputies and senators in Brazil voted to impeach President Dilma Rousseff of the Workers’ Party (PT) for state accounting misdeeds. The ex-Vice-President, Michel Temer, of the Brazilian Democratic Movement Party (PMDB), is now interim President while the Senate conducts further investigations. In August, if two-thirds of senators once again vote in favour of impeachment, considered extremely likely by most commentators, Temer will remain president until the next elections in 2018.

The interim government is supported by all the conservative political parties, industrial, mining and agro-business employers’ federations, the financial sector and the corporate media. The Temer government has already announced sweeping neoliberal reforms, gutting social programs and diminishing labour, social and environmental rights. 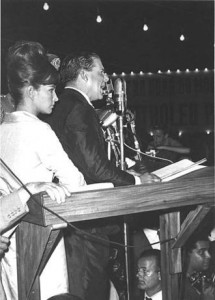 1964: A clique of generals, backed by American imperialism in the context of the Cold War, forcibly deposed President João Goulart in 1964 to prevent the further radicalization of working-class struggles that, in the late 1950s and early 1960s, had increasingly threatened capitalist order. It then governed with an iron fist for twenty-one years in the interest of key sectors of multinational and national capital, using repressive legal and police measures, including summary arrests, torture and murder of unionists, social movement activists and political oppositionists.

The military coup and the ensuing dictatorial regime was supported by all the conservative political parties, business associations and the mass media. It launched far-reaching economic and social reforms in favour of big business, drastically reducing basic labour, social and civil rights.

Both these events in 1964 and 2016 were coup d’états, sharing the same violation of democratic norms and involving similar class forces, structures of power, intentions and (possible) outcomes. There are, of course, obvious differences in context and details which are crucial to understand, the most prominent of which is that the 1964 coup was led by the Brazilian military to counter an increasingly militant labour movement that was pressuring the reformist government of President Goulart for radical agrarian and labour reforms. The PT government of Dilma Rouseff, on the other hand, had already embraced neoliberalism, cutting the welfare state and labour rights although it was not able to completely subdue the workers’ movement that had engaged in record strike levels between 2012-2014.[1] Nor was it able to adequately respond to social movements such as the 2013 rising of young workers and students against transit fare hikes and mega-events such as the World Cup and the Rio Olympics, widely known as the June Days.[2] 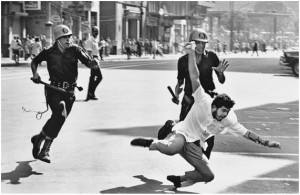 Police repression at a demonstration against the dictatorship, Rio de Janeiro, 1968. Evandro Teixeira.

Yet recently political theorists have convincingly expanded the notion of what constitutes a coup d’état. In his entry in The Routledge Dictionary of Politics, David Robertson conventionally defines it as “a sudden and violent overthrow of a government, almost invariably by the military or with the help of the military”.[3] To be sure, the majority of coups have centrally involved the military. Supported by a wide reading of political theory and contemporary history, however, the Brazilian political scientist Alvaro Bianchi rightly argues that such a limited definition does not allow us to consider the hypothesis of coups “promoted by groups within the Legislative and Judicial power or by a combination of various groups and factions”. Indeed, the 1964 military-led coup in Brazil was also amply planned and supported not only by powerful economic interests in civil society, but also by the Congress and Judiciary. Bianchi therefore usefully defines a coup d’état as “an institutional change promoted by a section of the state apparatus that utilizes exceptional measures and means that are not part of the usual rules of the political game”. [4]

What we have seen in Brazil in 2016 may be defined as a “parliamentary” or “institutional” coup similar to the undemocratic removal of the reformist presidents Manuel Zelaya in Honduras in 2009 and Fernando Lugo in Paraguay in 2012. After narrowly losing federal elections in these countries in the wider context of economic crisis, the traditional right-wing opposition parties and their partners in industry, agro-business and the corporate media opted to overthrow governments through anti-democratic legislative maneuvering. In Brazil, the opposition, aided by the negative effects of the economic crisis, well-organized and funded upper middle-class opposition groups, media manipulation and one-sided judicial interventions, cynically capitalized on the widespread disgust of Brazilians with political and economic corruption to scapegoat and illegitimately bring down the PT government for what is known as “fiscal pedaling”.

Fiscal pedaling refers to an accounting maneuver in which debt repayments are delayed until the following month so that state accounts appear to be duly balanced. Such practices were used by the governments of President Fernando Henrique Cardoso (1994-2002) and in the last several years by at least seventeen state governments in Brazil led by opposition parties. In 2013, President Barack Obama even utilized the practice when Republicans in Congress refused to raise the debt ceiling. Most legal commentators argue that it does not constitute a “crime of responsibility” that warrants impeachment. 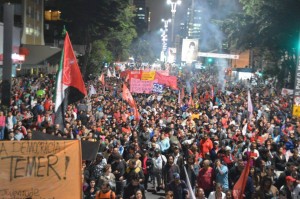 That leading members of the increasingly neoliberal PT government are guilty of kickback schemes and money laundering in relation to the state petroleum company, Petrobras, is beyond doubt. Yet politicians in all the main parties in the country have had their hands in the till for decades. Over half of Brazil’s federal deputies and one-third of senators are currently under investigation for everything from corruption and attempted murder to the use of modern-day slave labour. Seven of the 23 all-white, all-male ministers in the new Temer government are under investigation in the same Petrobras scandal that has hit the Rouseff government. In the first month of the interim government, 3 ministers were forced to resign in the face of allegations of corruption and influence peddling. Indeed, Rouseff is probably the most honest mainstream politician in a country whose political class is rife with corruption and unethical practices. As Noam Chomsky aptly put it, “we have the one leading politician who hasn’t stolen to enrich herself, who’s being impeached by a gang of thieves, who have done so. That does count as a kind of soft coup.”[5]

On the surface, the political crisis in Brazil has centered on corruption, yet it is really about who controls the liberal democratic state in the world’s ninth largest economy. Coup is thus the appropriate term to describe the impeachment of Dilma Rouseff.

Yet, while mobilizing against the illegitimate and undemocratic ouster of Rouseff, workers’ and social movements have not forgotten that it was her PT government that launched its own kind of coup, if not a coup d’état, betraying its historical traditions and promises in the 2014 election to increase social spending and advance labour and social rights. However the political crisis is resolved, Brazilians will still face a neoliberal agenda and, as during the military regime, the only progressive solution is the mobilization of the workers’ and social movements.

Sean Purdy teaches and writes about the history of workers’ and social movements at the University of São Paulo.

One thought on “Coups in Brazil: What’s In a Name?”