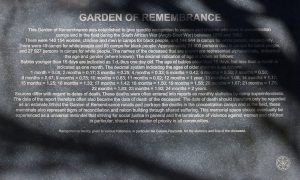 [Editors note: This post was revised on March 1, 2017. This is the fifth post in the Learning and unlearning history in South Africa’s public spaces series.]

The Garden of Remembrance, renamed the Garden of Misremembrance in the previous post, was explicitly oriented toward “reconciliation and nation building through shared suffering.”  For this reason, the Garden also commemorated the thousands of (unnamed) black South Africans who died in the concentration camps the British created to deprive the Boers of information and material support in the Anglo-Boer, or South African, War.  As problematic as the Garden of (Mis)Remembrance may be in its own right, the narrative of shared suffering, as well the goals of national unity and nation building, are undermined by other features of the larger National Women’s Memorial and Anglo-Boer War Museum site. This is to be expected in the Women’s Monument itself, erected in 1913, and in the War Museum, which openly focuses on and celebration of the former Boer Republics (i.e., the Orange Free State and Transvaal).

More surprising is the way a second newly erected monument, located across the lawn from the Garden (and in the shadow of the War Museum), that also remembers blacks who died in the camps contradicts the Garden’s focus on national unity and nation building, at least if the nation being referred to is South Africa and not the Afrikaner nation.

Along with the Great Trek away from British control in the 1830s and 40s, the internment and death of over 20,000 women, children, and elderly in the concentration camps of the Anglo-Boer War is one of the historical pillars Afrikaner identity and nationhood. The history of repression at the hands of the British is a key component of what it means to be Afrikaner, and is the cause of some continued animosity toward English-speaking South Africans and the English language. They—the English—did this to us—the Afrikaners. Indeed, continued feelings of victimization and a lack of reconciliation between English and Afrikaner for historical repression led Archbishop Desmond Tutu to use the Anglo-Boer War as an example of what he hoped would come out of the country’s post-apartheid Truth and Reconciliation Commission and other reconciliation processes. He wrote in 1998 that “it would be wonderful if one day some representative of the British/English community said to the Afrikaners, ‘We wronged you grievously. Forgive us.’ And it would be wonderful too if someone representing the Afrikaner community responded, ‘Yes, we forgive you – if you will perhaps let us just tell our story, the story of our forebears and the pain that has sat for so long in the pit of our stomachs unacknowledged by you.’”

Until recently, Afrikaners claimed unique ownership of death in the concentration camps, and indeed of the concentration camp experience as a whole. Certainly the camps do not form part of the identity or claims to victimhood and nationhood of the black populations of the former Boer Republics. With new scholarship on black concentration camps and with the unveiling of the two memorials at the National Women’s Memorial and Anglo-Boer War Museum, this is changing, though not entirely. As suggested above, the inclusion, in the name of nation building, of blacks in the tragedy of the concentration camps has not been without contradictions. 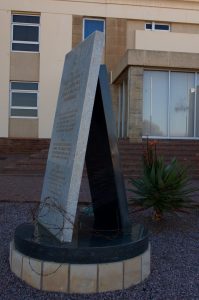 The smaller monument that remembers the deaths of white and black internees in the camps presents a confusing visual depiction of the South African nation. The two stone slabs—one black and one almost white—lean against each other and are surrounded by barbed wire, a clear reminder of imprisonment. The artist who designed the monument seems to be insisting on the mutual reliance between the two communities: without the black community/stone, the white would fall over, and vice versa. Basing the design of the monument on this idea of mutual reliance or co-dependence is problematic, not the least because it forgets that white wealth and power were accumulated very much on the backs and at the expense of black land and labour. As well, if the point of the monument is also to insist on the co-dependence of the black and white community, visitors might wonder why the black stone is noticeably smaller than the white one. Those with a critical eye might conclude that the artist, the museum, and the community the museum celebrates view the black community in this way, as somehow second to the white community. That the monument can be read in this way certainly does not bode well for it contributing to the reconciliation of the nation that the Garden of Remembrance celebrated, nor to the construction of the South African nation. 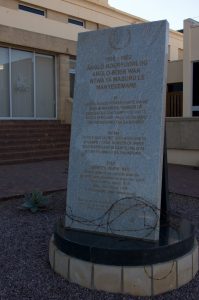 There is an additional problem with this particular monument, one which further complicates its contribution to South African nation-building based on shared suffering. While the white stone slab declares that 49 concentration camps were built for white South Africans, there were 65 refugee camps for black South Africans, a differentiation which works to undermine the idea of experiences and suffering shared by the black and white communities. This difference between concentration camps and refugee camps comes from the British and points to the distinct motivations they had for interring blacks and whites. The British, it seems, recognized that white and black experiences of the War were not shared. 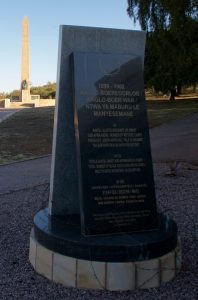 Different narratives exist at the National Women’s Memorial and Anglo-Boer War Museum. While the Garden of Remembrance (not unproblematically) promotes reconciliation and South African unity, the smaller monument explored here seems to have a narrower focus in terms of “the nation” and an unfortunate understanding of other communities’ role in the past and place in the present. Twenty-two years after the first democratic elections, South Africans have not yet figured out what to do with history. And understandably so. Twenty-two years is hardly enough time to work through 350 years of community conflict, racism, and repression.

*An earlier version of this post did not include the fact that it was the British who named black camps refugee camps and white camps concentration camps.