[This is the sixth post in the Learning and unlearning history in South Africa’s public spaces series.]

The Constitutional Court as an institution was founded in 1994 by the 1993 interim Constitution, which was then superseded by the final Constitution in 1996. The building was officially inaugurated with much fanfare in 2004. 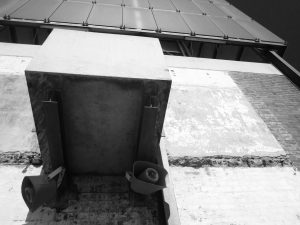 The Court is located on the site of what had been the notorious high security men’s prison, where Mahatma Gandhi, Albert Luthuli, Joe Slovo, Nelson Mandela, and many others were once interned. The prison closed in 1983. The equally notorious but far less known women’s prison, where Winnie Madikizela-Mandela, Albertina Sisulu, and Fatima Meer were imprisoned, is located a stone’s throw away.

The men’s prison’s notoriety is certainly due to the names of those who passed through its gates, but also to the dehumanizing and torturous treatment political prisoners, especially, received there, as in other prisons in apartheid-era South Africa.

When the site was chosen to be the home of the new Constitutional Court, rather than raze the building and erase it from the cityscape entirely, it was decided to incorporate parts of the old prison into the new court building and so leave a very visible reminder of the past—its pain and injustices—in the present. Thus, the bases of several stairwells in the Awaiting Trial Block were left standing (photo 1).  The voices of former detainees can be heard narrating their experiences in great detail from loudspeakers attached to one of the stairwells.

A quote from Victor Nkabinde, a former political prisoner, is displayed on the second: (photo 2) “This place, given that the roof is gone, no longer has the same impact it had on me when I was kept here. There is a little bit of freedom now that I can see the sky. But the anger is not gone.” Since the 15th anniversary of the Constitution in 2011, the Flame of Democracy has been housed in the same structure. (photo 3) The preamble to the Constitution is written out below it: (photo 4) 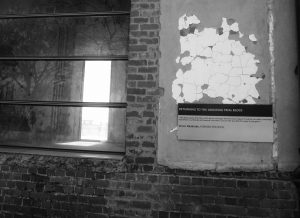 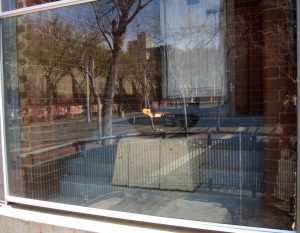 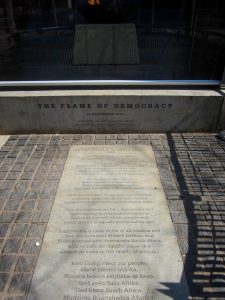 “We, the people of South Africa,
Recognize the injustices of our past;
Honour those who suffered for justice and freedom in our land;
Respect those who have worked to build and develop our country; and
Believe that South Africa belongs to all who live in it, united in our diversity…”

It is difficult not to feel the weight of history when you stop to think that Victor Nkabinde, who celebrated being able to see the sky, is one of those who suffered for justice and freedom, that the voices on the loudspeaker that narrate the inhumane treatment they received were in the very spot where the flame of democracy now burns. 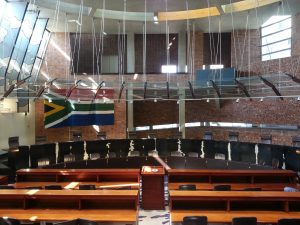 Yet history weighs more heavily, and aspires to liberate, in the Court itself. Most significantly, bricks from the old prison were incorporated into the wall of the chamber. (photo 5). As if in response to Nkabinde’s comments about light, windows in this brick wall allow sunlight to flood into the room.

The symbolism of using the bricks which formerly housed injustice and human rights violations in the construction of the building meant to protect South Africans’ fundamental and Constitutional rights is impossible to ignore: an unsanitized history is very obviously necessary in the construction of the present; the past must not be forgotten or ignored for it provides shape and strength to that present; without the past, the present and future are unimaginable. Without these old bricks and the countless acts of cruelty they have witnessed, the Court would have been impossible to build. The building would have collapsed in on itself for want of a foundation.

These old bricks are located behind the justices, suggesting that, while the justices are physically turning their backs on injustice, they do not forget the history of the prison, of the country, and, indeed, of the judicial system’s complicity in the state and security forces’ commission of gross human rights violations and crimes against humanity. The justices bring a long history of past injustice with them as they hear cases, make rulings, and work to protect the Constitution and fulfill its preamble. Most notably, to “Lay the foundations for a democratic and open society in which government is based on the will of the people and every citizen is equally protected by the law.” 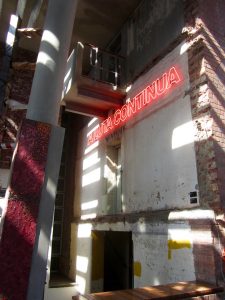 Bright red neon lights shout out A luta continua (photo 6) atop the third of the remaining stairwells. The struggle continues. The phrase is an anti-colonial rallying cry credited to the first president of an independent Mozambique, Samora Machel. A luta continua is extremely relevant today in the midst of the most recent wave of student protests demanding the decolonization of higher education, in addition to the freezing of ever-increasing tuition costs that are making higher education inaccessible for much of the black majority. As in 2015, the 2016 protests have seen the militarization of university campuses leading to the use of excessive force against student activists and their subsequent arrest.

The justices, as well as the political and economic elite and society in general, still have much work to do before the dream of the preamble to “Heal the divisions of the past and establish a society based on democratic values, social justice and fundamental human rights” is made a reality.

One thought on “A luta continua: past, present, and future in South Africa’s Constitutional Court  ”