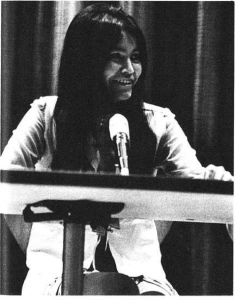 Just at this time John Lennon and Yoko Ono were in Canada. They arrived in Toronto on May 25, 1969 and two days later began a week-long “bed-in” for peace in Montreal’s Queen Elizabeth Hotel.[6] They wanted to encourage young people to work toward peace through non-violent means, to “get the message across to the squares.” They were visited by celebrities, politicians and journalists. There Lennon wrote and recorded “Give Peace a Chance” on June 1. The next day in the Montreal Gazette an article appeared entitled “Cree woman believes injustice in housing- pitches a teepee.” Lennon and Ono might have read that or any of the many other articles that covered her protest.

Still camped on the square, Lillian was invited to go to Edmonton’s CJCA radio and speak with someone on the telephone about her protest. This was in the first days of June when Lennon and Ono were in Toronto. As she recalled to Corinne, when CJCA came to the tipi to do an interview she was told:

This man would like to talk to you at the station. It’s going to be an international interview. And he’s coming to Toronto to support peace… to promote peace. And I went to that radio station. We had a live interview from Edmonton to Toronto…He said it was John Lennon. And if you had said Dag Hammarskjold, I would have understood… or if you had said Martin Luther King, I would have understood. But John Lennon? This didn’t ring a bell with me. And he said he had a band, and he travels worldwide and that the issue he wanted to talk about … what I was doing there. He said ‘I want to support you. What would you like me to say to the world?’ And then I said, I thought of my grandma already again, I said, ‘My grandma used to say ‘Keespin esa Kasakehetoyah, Kasetos-katoyah, Kawechehetoyah, Namoya Ka-no-tin-to-nanhoyo.’” And then he said, ‘well try to translate that.’ And I said “I’ll translate it.’ I said ‘Imagine that if, there was no hate, if we loved each other, we loved one another, that there would be no war between us.’ And he said ‘Do you mind if I use that?’ He had a real thick English accent, eh?” … I said, ‘yeah, go ahead, you can use that.’[7] Lennon said that he was writing down the words on a pillow case. Lillian also recalled that Ono said to her “you look like me.”

It was not until she heard the song “Imagine” over the radio some years later that Lillian remembered the interview and giving permission to John Lennon to use the words of her Cree grandmother, Tshichu (meaning Little Girl). Lennon said the song was inspired by Yoko Ono’s book 1964 Grapefruit, where she instructs readers to “imagine” various scenarios, such as clouds dripping.[8] This does not seem as inspiring however as the words of Tshichu, Lillian’s grandmother.

There are clues of the Cree and Indigenous Western Canadian inspiration for “Imagine” in the original video of the song. Yoko Ono is dressed as a North American Indigenous woman. Lennon is dressed as a sort of cowboy/ frontiersman. It appears Lennon is wearing mukluks, a decidedly Indigenous Canadian touch. Perhaps this conveys the acknowledgement that the song was inspired by Lillian, quoting the words of her Cree grandmother in the summer of ’69.

Lillian’s battle was not over after having chatted with one of the world’s most prominent celebrities. When she and her supporters attempted to put up the tipi on the Legislative grounds, there was a confrontation between police, with their German Shepherd dogs, and members of the Citizens’ Committee on Housing and Discrimination.[9] The cabinet of Premier Harry Strom quickly changed strategies and by Order in Council permitted the tipi to be raised on the grounds of the Legislature where it was surrounded by supporters in tents. A brief was presented to the cabinet by the Citizens’ Committee, and there was the beginning of a provincial plan for welfare housing.[10]

Lillian did not stop there. It would take many pages to list all of her activities since that summer. That same year she helped to establish the Alberta Native Peoples Defense Fund. She took part in the 1969 Alcatraz Island occupation by Native Americans. She lived at the Smallboy Camp in the Kootenay Plains for five years, founded by Chief Robert Smallboy to draw attention to the conditions of urban and reserve Indigenous people. There she helped establish the Robert Smallboy School. Many of her activities over the last decades relate to the welfare and education of both mothers and children, and they include the Nekawe Daycare, established in 1972, where the first language was Cree. She was an organizer of the Sacred Circle program offered at Prince Charles School, Edmonton, where elementary students receive Cree language instruction and where the needs of urban Indigenous students are addressed. Along with her sister the late Jenny Margetts, Lillian helped to found the organization Indian Rights for Indian Women, that fought for decades for equal rights for First Nations women to end discrimination under the Indian Act. She is a supporter of the Nechi Institute that changes lives based on compassion. Her most recent initiative is organizing a trail ride of 240 horses from her grandmother’s home reservation Rocky Boy in Montana to Saddle Lake in honour of the 240 Cree who fled Canada after the 1885 Resistance.

Corinne George gave a paper at the University of Alberta conference History of Women’s Political and Social Activism in Western Canada (Oct. 28-30 2016) that focused on Lillian and other Indigenous women activists: “’Imagine…if… we loved one another’: Grassroots Activism of Aboriginal Women in Edmonton, 1951 – 1985.” Lillian was conference Elder and participant.

Lillian Shirt is a Cree Elder from the Saddle Lake Cree Nation. She lives in Edmonton. Corinne George is from the Gitimden Clan (Bear Clan) from the Witsuwit’en Nation. She is Regional Principal for the Lakes District campus of the College of New Caledonia. Sarah Carter is Professor and H.M. Tory Chair in the Department of History and Classics, and Faculty of Native Studies of the University of Alberta