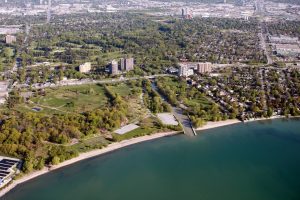 In 1971, Philosopher’s Walk, a pathway behind the Royal Ontario Museum connecting Bloor Street and Queen’s Park, was known as a gay cruising spot.  A volunteer with the Community Homophile Association of Toronto (CHAT) strolled through this path on a summer night.  He witnessed two men being “jumped from behind” by undercover police agents, who arrested them on charges of gross indecency. The CHAT volunteer formed a one-man organization called the Toronto Civilian Park Patrol.  He found three groups: men looking for gay sex, uniformed officers with the Toronto police, and undercover officers with the Toronto police. He quickly noticed that with so many people standing around not having sex, Philosopher’s Walk began to lose its allure, though this path and the connecting Queen’s Park were subject to undercover police surveillance through the 1970s and beyond. 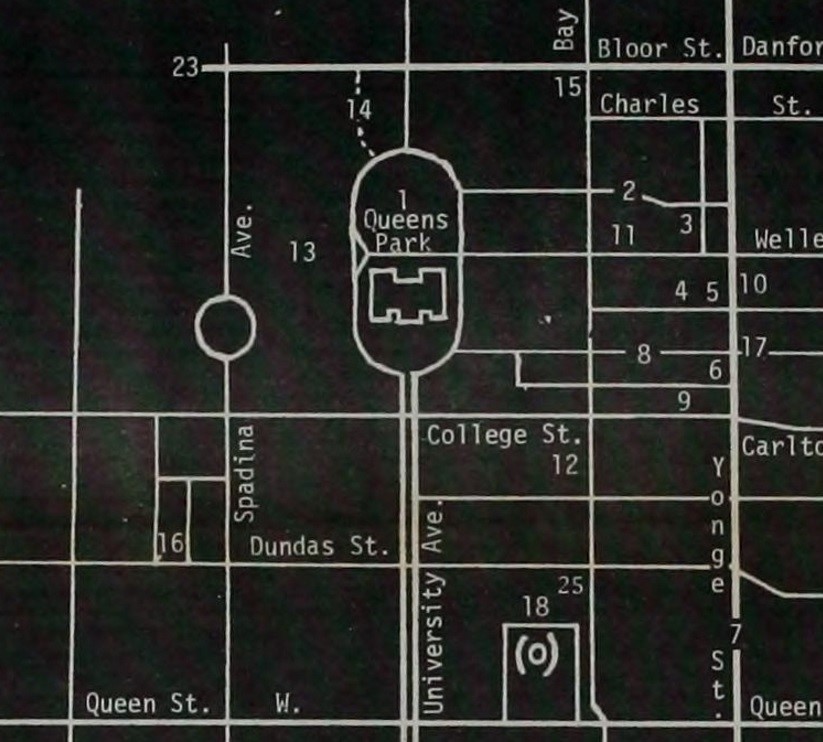 In this 1973 map published by the Body Politic, Philosopher’s Walk is identified as a gay cruising spot (number 14), stretching from Queen’s Park to Bloor Street.

High Park was another site of police surveillance.  During the summer of 1973, police officers patrolled the park and approached single men to ask if they had ever been convicted of gross indecency.  If the individual was honest and answered yes, the officer charged him with vagrancy.  Community activists were becoming increasingly aware that police were using lesser charges to elicit a guilty plea.  Fearing the humiliation of a trial, and the cost of legal representation, most of these men pleaded guilty and walked away with a conviction, as well as a police record.  To combat this, CHAT formed a court worker program that provided free legal assistance to anyone charged for having gay sex.  Despite this effort, many men continued to plead guilty.  In August 1977, Bruce Davidson was walking through High Park “and noticed a man in shorts, with his shirt open, lying on a park bench stroking himself.”  This stimulating scenario worked, but as Davidson approached, the man identified himself as a police agent and charged him with indecent assault.  Davidson ultimately pleaded guilty to a lesser charge. 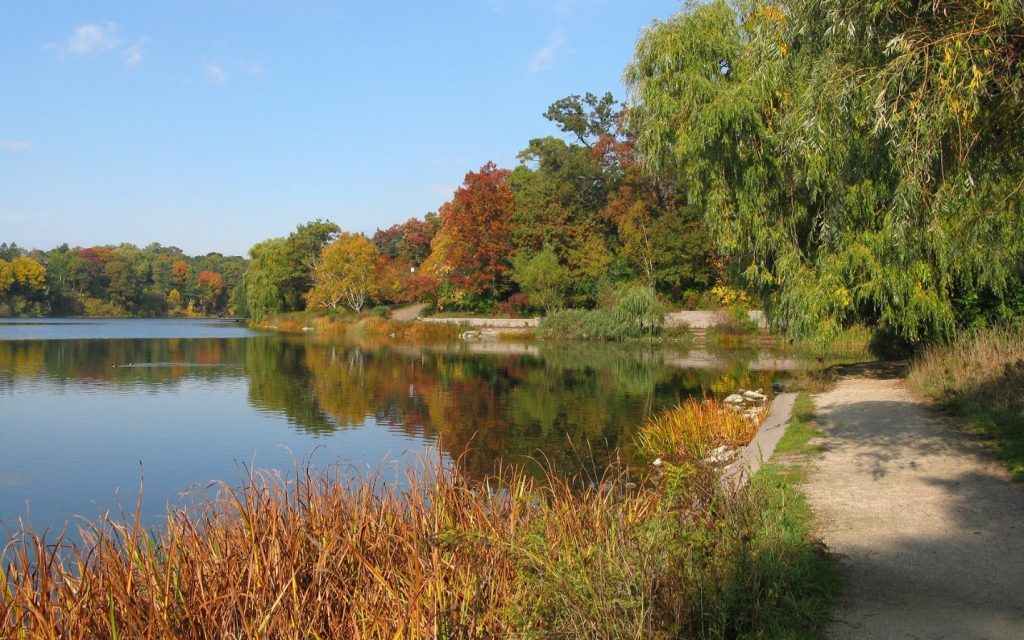 Historian Steven Maynard has examined “the struggle over public urban space” in the early 20th century.  Allan Gardens was one of the sites in which sex between men was subject to police surveillance.  Maynard demonstrates that the location of Allan Gardens near the working-class neighbourhood of Cabbagetown made this a prime location for both gay sex and police entrapment.  In the 1970s, the proximity of Allan Gardens to the emerging queer community meant this legacy continued.  In the summer of 1979 Andrew Britton walked into Allan Gardens late one night and went to an area with trees and bushes located near the park’s greenhouses.  He noticed that there were several men sitting around and milling about, including a man named Alan McMurray, whom he did not yet know.  The two made eye contact and walked into the bushes.  Britton stated “we’d hardly had a chance even to say anything to each other before we both became aware of a couple of men peering at us through the bushes.”  These men were police agents, who charged Britton and McMurray with gross indecency.  They fought their charges, and won due to a reasonable doubt as to whether the officer witnessed anything indecent. 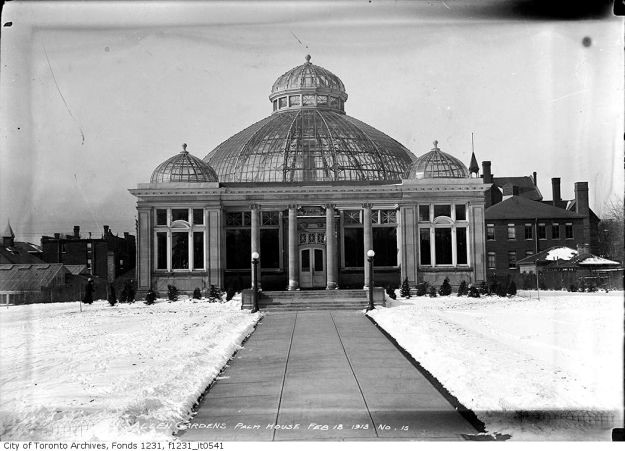 Allan Gardens has historically been known as a space for sex. The benches, trees, and bushes behind the greenhouse made for a popular spot in the 1970s.

One of the most shocking instances of police surveillance during this period was in David Balfour Park.  With winding paths and ravines, this space was ideal for gay cruising during late summer nights.  In August 1980, ‘Don’ took a late-night stroll through the park and saw a group of men gathered in a dark clearing, and he went to join them.  As soon as he arrived, “there was a sudden burst of light and the sound of a gun firing – twice.”  This warning was followed by a third shot.  One of the other men arrested, Tony, recalled that the third bullet “whizzed past his ear,” and that “it sounded really close.  I could smell the gunpowder.”  Five men were charged with gross indecency and indecent acts.  At trial, it was revealed that plainclothes police agent, Richard Dionne, was responsible for discharging his firearm three times into the ground.  Dionne claimed he used his gun because he felt threatened.  The five men were ultimately convicted and given an absolute discharge after being scolded for their sex acts by the judge. 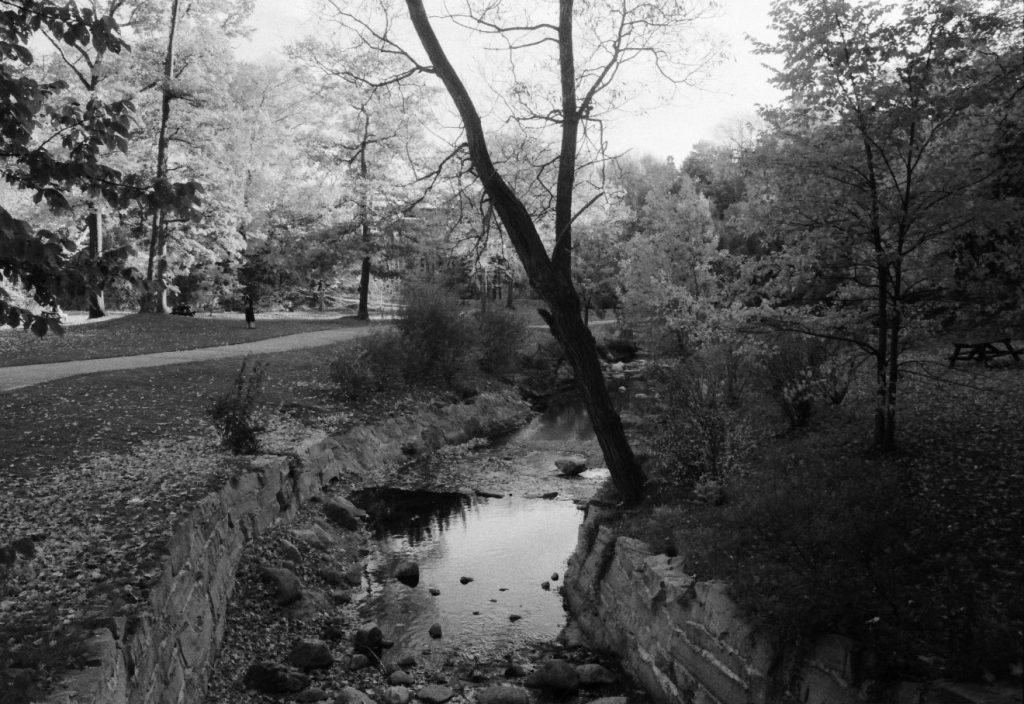 Photo of David Balfour Park c. 1970s. The paths near the ravine were shrouded in darkness at night. This space was one of the more popular cruising spots of the 1970s. Photo used with permission from flickr user citatus. 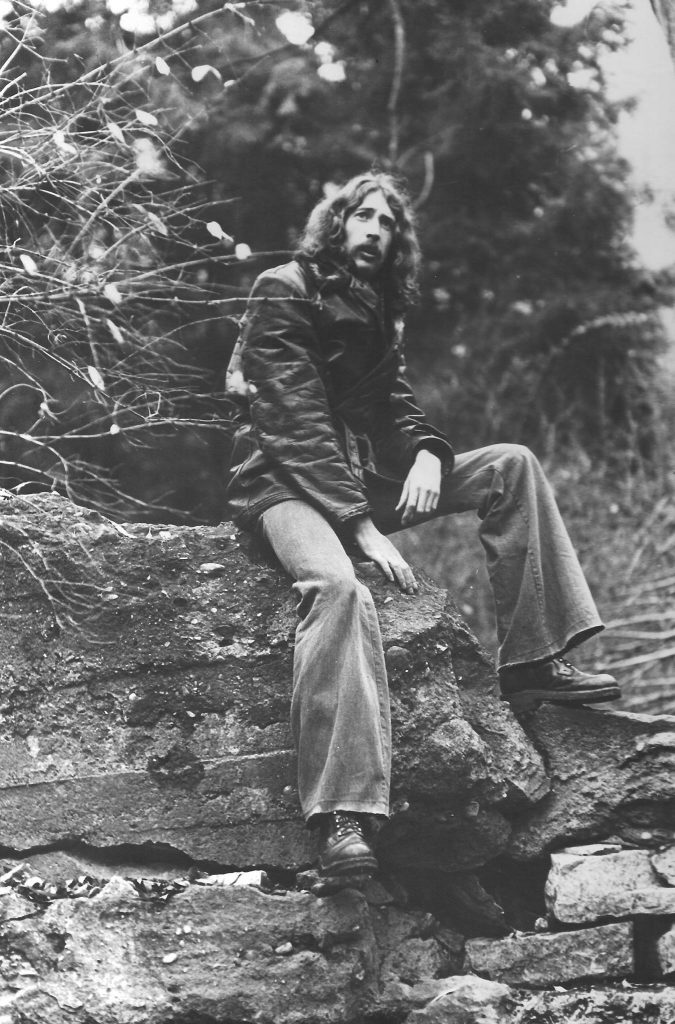 In the wake of the violent mass arrest during the February 5th, 1981 bathhouse raids, the community was determined to end these dangerous police operations.  Inspired in part by the CHAT court worker program, a group called the Right to Privacy Committee (RTPC) was formed to organize the legal defence of those charged in the raids.  This group worked with lawyers from the Law Union of Ontario and they were successful on an unprecedented scale: 87% of the 286 bathhouse patrons either had their charges withdrawn, or were acquitted at trial.  After the bath raid trials concluded in 1982, the RTPC formed a new organization called Gay Court Watch.  This group expanded their mandate to include anyone charged for having consensual sex, including in public parks.

After the bath raids, the city commissioned law journalist Arnold Bruner to conduct an official inquiry into the relationship between the gay community and police.  He investigated the issue of policing public parks, and revealed that heterosexual “lovers’ lanes” were common, but due to the shame associated with gay sex, men seeking men were the easy targets for police surveillance.  Bruner noted that policing the parks was a serious community concern, and thus one of the key recommendations of his report was “that a moratorium be placed on arrests of persons suspected of engaging in sex in public parks.”

The location of the current battle over sex in public spaces, Marie Curtis Park, was not immune to the Toronto morality police of the 1970s and 1980s.  In the summer of 1982, two men were arrested “by plainclothes officers posing as gay men and were charged with indecent assault.”  Judges in these cases were not receptive to the police operation.  Provincial Court Judge V. A. Lampkin concluded that Marie Curtis Park had a reputation as “a known homosexual park.”  Both men were acquitted.

The fate of those charged in the recent arrests is still unknown, and there is concern that the police will continue or expand these undercover park operations against queers this coming summer.  The community’s history of resistance reveals that by collectively organizing, we can fight back. Activists and lawyers have formed a group to provide legal coordination to those charged.  Queers crash the beat are continuing this battle from the 1970s, and they deserve our support.

Bruner, Arnold. “Out of the Closet: Study of Relations Between the Homosexual Community and the Police.” City of Toronto, September 24, 1981.