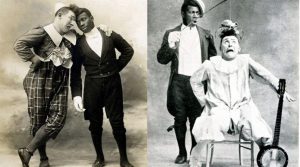 Editor’s note: This is the second in a series of posts from contributors to Animal Metropolis: Histories of Human-Animal Relations in Urban Canada (University of Calgary Press, 2017). In each entry, the contributors use their own chapters as the basis for wider discussions about contemporary developments that highlight the complex interactions between humans and animals. The editors of ActiveHistory.ca are pleased to publish these pieces that originally appeared in late February on The Otter, the blog of the Network in Canadian History & the Environment. The first post by Darcy Ingram spoke to strategies in the animal rights movement, and today, Christabelle Sethna speaks to the animalization and racialization of humans and nonhuman animals.

My contribution to this edited volume, “The Memory of an Elephant: Savagery, Civilization, Spectacle,” deals with Jumbo, an African bull elephant. Born circa 1860, in what is now Sudan, he was captured by hunters and transported across Africa and the Middle East and thereupon to Europe, England and the United States, to become a major zoo and circus attraction. 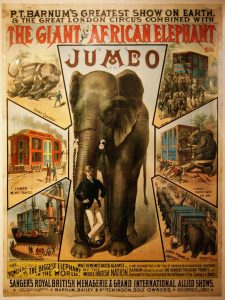 Jumbo is good to think with. Here I consider the similarities between his international journey and another taken by Raphael Padilla (1868?-1917), the toast of the Nouveau Cirque in late nineteenth-century Paris. Padilla is the main character in Roschdy Zem’s recent film, “Chocolat” (2016). It features Omar Sy as the Afro-Cuban Padilla and James Thierrée as George Foottit (1864-1921), a Manchester-born acrobat. The two men performed together as a popular black and white clown duo. The film is based on Gérard Noiriel’s book (and play).[1] Nicknamed “Chocolat” because of his dark complexion, Padilla was born into a black slave family in Cuba, sold to a Spaniard and then taken to Bilbao, Spain where he ran away, working odd jobs until meeting the English clown, Tony Grice. Grice hired him as his domestic servant and circus sidekick in Paris. Padilla left Grice to join forces with Foottit, their clown act eventually taking the French circus world by storm. 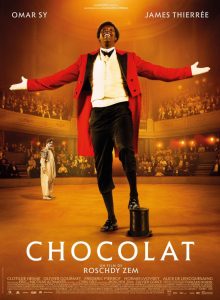 The international journeys of Jumbo and Padilla provide striking evidence of the close but often overlooked relationship between animalization and racialization under colonialism. A key feature of this relationship is the traffic in human and nonhuman animals along colonial circuits, facilitating the symbolic and literal consumption for profit of human and non-human animal bodies that were simultaneously animalized and racialized. In the opening scenes of the film, Padilla appears as a small-time circus performer, his powerful, muscular, black body is covered with animal skins, a hoop dangles from his left earlobe, a jagged yellow necklace hangs below his collarbone, his hair stands upright in an unruly Afro and his black eyes bulge. He menaces a frightened white circus audience with a bone-shaped club and deep guttural roars. In another scene Padilla, still clad in animal skins, holds the paw of another circus performer, a chimpanzee, who lives in a cage. Sy’s Padilla plays a double game. As an African man living in colonial France, Padilla has drawn the same stark conclusion that Frantz Fanon would decades later; the white world sees not a man but his beastly otherness: “[t]the Negro is an animal, the Negro is bad, the Negro is wicked, the Negro is ugly.”[2] Yet Padilla, unable to elevate himself above what Fanon terms a black man’s “jungle status,”[3] must instead tap into it in order to survive economically in a prison house of white colonialist fantasies about his base animal nature. 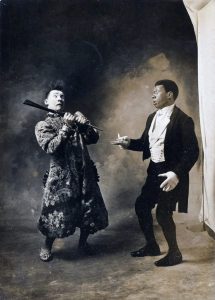 After pairing up with Foottit, Padilla is no longer costumed as an African savage. He now is clad in the formal attire of a civilized white Frenchman, a seeming incongruity that intensifies the comedy. By contrast, Foottit, his white face whitened even further by exaggerated makeup, dresses in garish clothes, hats and shoes. Yet it is Padilla who most often plays the dumb beast subjected to Foottit’s repeated kicks, slaps and violent knocks to the delight of the white audience. Although the film takes pains to portray Padilla as a self-aware and agentic individual, it is impossible not to see a colonial master-slave relationship at work in this clown act. Would Padilla have been featured in drawings, advertisements, cartoons, posters and storybooks had he assumed Foottit’s role? The film’s answer is: unlikely to the point of being unimaginable. In fact, as some have pointed out, the slang expression, “être chocolat,” meaning to be duped or thwarted, is attributed in part to Padilla’s staged haplessness in his interactions with Foottit. Padilla died in obscurity and poverty after trying and failing to build a career apart from his partnership with Foottit. That failure, according to the film, was triggered by Padilla’s ill-received attempt to star as Othello, a Shakespearean character who is, like Padilla, is subjected to racism, insulted as a “Barbary horse” and doomed to unhappiness by his savage blackness. 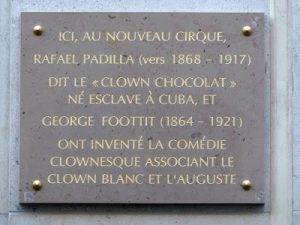 Plaque in memory of Padilla and Foottit, Paris. Source: http://entreetoblackparis.blogspot.ca/2016_02_01_archive.html

Padilla has been commemorated in Paris with a plaque honouring his memory. His ghost calls forth the memory of other human and non-human animals swept from their places of birth and trafficked to distant parts of the colonial world to serve as spectacles of savagery. Yet unlike Padilla and Jumbo, whose celebrity was deeply connected to their animalization and racialization, most remain forgotten or ignored. The international journeys of Padilla and Jumbo point to the value of studying the traffic in human and non-human animals as a joint endeavour, not as separate occurrences; approaching racialization and animalization as mutually constitutive processes; and examining the historical contribution of zoos and circuses to the existence of these spectacular phenomena.