Editor’s note: This is the first in a series of posts from contributors to Animal Metropolis: Histories of Human-Animal Relations in Urban Canada (University of Calgary Press, 2017). In each entry, the contributors use their own chapters as the basis for wider discussions about contemporary developments that highlight the complex interactions between humans and animals. The editors of ActiveHistory.ca are pleased to publish these pieces that originally appeared in late February in The Otter, the blog of the Network in Canadian History & the Environment.  In this first post, Darcy Ingram speaks to strategies in the animal rights movement. 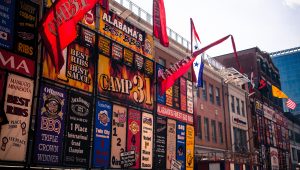 Every year in June the Ottawa RibFest takes place along Sparks Street, a block from Parliament Hill. And every year that event gives animal rights protesters a perfect opportunity to express their views. A Huffington Post Québec article offers a good indication of the 2016 response from PETA: identity inverted, a fleshy female protester is transformed into a fleshy animal on the grill. A roast to roast the RibFest.[1]

This is the kind of powerful imagery charged with sexuality and violence for which PETA has become infamous. It is also part of what presumably separates the modern animal rights movement from that of its predecessor, the animal welfare movement, which traces its origins to the eighteenth century and which blossomed in the Victorian era.

I find PETA’s work fascinating. But I also find the presumed newness of these strategies to be problematic. I say this because, when it comes to the rights and the well-being of animals, the work that was done during the latter half of the nineteenth century has frequently been characterized as a series of halfway measures centered as much on collective self-interest as genuine concern. During the 1980s, social historians did much to establish a view of the animal welfare movement as a middle-class means to regulate the lower classes, while many proponents of the animal rights movement that took shape in the 1970s present their predecessors as well-meaning but inferior counterparts to a new and qualitatively different approach to human-animal relations.

The image below tells another story. In my chapter in Animal Metropolis I discuss the gender dimensions of the animal welfare movement in Canada during the Victorian era. One of the observations it makes concerns the ways in which both the opponents and the supporters of animal welfare found it useful to re-categorize their subjects along gender and species lines – in discussions for and against animal welfare, animals became humans, men became women, and women, very often, became animals. 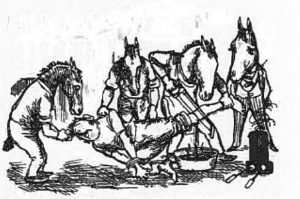 “The Docking Fashion Reversed” is a brilliant example of such identity reversals at work. It refers to the practice both trendy and controversial in late nineteenth-century equestrian circles of removing (docking) a horse’s tail, often without anaesthetic and by less-than-professional means. The image appears in Work Accomplished by the Toronto Humane Society, a lengthy book published by that society in 1892.[2] In it we find an inversion readily comparable to that of PETA. Here, a team of three horses in workmen’s clothing conducts the grim business of removing the leg of their human subject, under the supervision of a fourth equine onlooker, whose clothes suggest a man of another class, perhaps a veterinary doctor or, more likely, the fashion-conscious owner. Both in its inversion and its simplicity, the image is powerful. As with PETA’s RibFest display, it exposes the paradoxical attitudes and practices that rest at the heart of the human-animal nexus. The point I wish to make here, though, is that in broad strokes, “The Docking Fashion Reversed” is not much different from the purportedly radical work of PETA and other contemporary animal rights organizations: invert humans and animals via powerful, controversial visual images as a means to make the treatment of the latter as unsettling as possible. Keri Cronin discusses similarly violent images on the part of the nineteenth century’s more radical anti-vivisectionists, but the strategy informed even the mainstream movement and its respectable middle-class supporters.[3]

Indeed, if we are to look for a difference, it rests in PETA’s addition of performance and of sexuality as attention-grabbers. Yet even here, similarities remain. Like their nineteenth-century counterparts, PETA’s strategists are aware of the line between the acceptable and the controversial, and they use that knowledge to provoke their audience. As James Turner points out, one of the key transformations to inform Victorian society when it came to the treatment of animals was the era’s heightened sensitivity regarding pain.[4] Unlike PETA’s RibFest imagery, “The Docking Fashion Reversed” capitalizes on that sensitivity in spades.

So let’s not sell the modern animal rights movement’s predecessors short on strategy, on controversy, or on motivation. When it comes to the evolution of efforts to reshape human-nonhuman animal relations, the Victorians who framed much of the contemporary legal, policy, and NGO landscape around the treatment of animals lived like us in a complex world. The responses between then and now are not so different that it becomes useful to overlook the similarities that inform them. It is, I think, a far more profitable strategy to recognize the longevity of this movement than to reinvent it as a product of the recent past.