It seems as though at every turn we are being reminded of Canada’s sesquicentennial: “Canada 150”. Not just reserved for commemorative events, the marketing of Canada’s anniversary has even been gobbled up by grocery stores. Atlantic Superstore, for instance, is cashing in by offering “Canada 150 deals” that advertise a variety of grocery goods for just $1.50. Yet while 2017 is being cast as a year of celebration and something worthy of being marketed to the Canadian public, the year also marks the much more somber centenary of the Halifax Explosion.

As the attention of the rest of Canada is pulled towards 150, Halifax is trying to prepare for both anniversaries. The question this begs is: will commemorations continue to frame the Halifax Explosion as simply a local tragedy? A century on, can historians and the heritage sector now use modern technology and digital methods to transform our view of the Explosion from that of a local disaster to a wartime military accident that caused not only great civilian loss but had national and international implications that extended well beyond the blast?

Public debates over the contents are raging. One example suggests adding a grocery receipt from 2017 to similar copies from 1985 and 1917.[1] Similarly, museums like the Maritime Museum of the Atlantic and the Naval Museum at Admiralty House are updating and adding new narratives to their respective exhibits while award-winning Nova Scotia artist Laurie Swim is creating an innovative memorial quilt (watch the video).

While these local efforts are crucial, and regardless of the fact that the anniversary will receive some cursory national news coverage in the lead up to December 6, there is a larger issue: although the Explosion was an unprecedented disaster on a global scale, its commemoration has been oddly relegated to a geographically limited local context. Yes, indeed, it was the physical space of Halifax (particularly the North end) that was damaged but I argue that the impact of the explosion was felt far beyond the blast zone. Not only was it the largest man-made explosion prior to the atomic bomb, but with 1,963 killed, 9,000 injured, and 2.5km of the city destroyed, the Explosion remains the largest disaster in Canadian history.[2]

The sole result of a military accident, the explosion tested the resources and responses of Haligonians, Maritimers, and other Canadians, and even required international relief from Britain and the United States.[3] Despite all of this, the Halifax Explosion continues to be cast as simply a local tragedy. This has been exacerbated by mnemonic devices like Historica Canada’s Heritage Minute (with its iconic line: “Get these children outta here, that ship is gonna blow!”), which focuses our memory on individual, local stories like that of Vincent Coleman.[4]

While monitoring rumblings of what will emerge on December 6, I wonder whether we will move past the traditional narratives that have been used to frame the Halifax Explosion: Coleman’s heroism, the “close calls” and the naivety of Haligonians who upon seeing the Mont-Blanc catch fire, laden with over 2,000 tons of explosives, went towards the harbour to watch the unprecedented spectacle rather than taking cover. As we now approach 100 years since the Explosion, historians, including public historians, those in the heritage sector, and the public should have an obligation to reconsider the ways that we interpret the past. Technology has changed the world significantly and the way we view our world, including our past, should reflect this advancement.

I have previously written about the power of using digital tools and methodologies. In a similar vein, I argue that creating a Halifax Explosion Database, which I have dubbed “HExD” (this also points towards the hex that Haligonians thought had been placed on the city when a debilitating snowstorm hit the day after the explosion and further hampered relief efforts) will allow us to more equitably hear the voices and experiences of a larger cross-section of individuals. In doing so, it will provide innovative quantitative statistics, reveal patterns across the data, and most of all, will provide narratives additional to that of Vincent Coleman.

Although still a work in progress, the objective of this project is to re-examine the Halifax Explosion using digital methodologies to ultimately illustrate the significant impact and legacy the Halifax Explosion had, not just on Halifax, but on various local communities (e.g. Africville), the province of Nova Scotia and its rural towns, and the nation. HExD derives from the Nova Scotia Archives’ Halifax Explosion Book of Remembrance. They kindly granted me permission to use the raw data. The Book of Remembrance, a compilation of ledgers of all victims, is a fantastic searchable resource whereby victims can be identified by name or keyword. While this is exceedingly useful for individuals who want to confirm the identity of a victim and gather further information (e.g. date of death or age), a limitation is that by virtue, the data is still displayed as singular cases and one must know for whom they are looking. 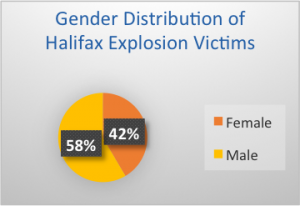 In addition to identification, HExD allows us to sort, graph, map, and interpret the data on a larger scale. For instance, it will enable us to trace what injuries victims sustained; four members of the Beiswanger family were found as “charred remains”. HExD will also carefully consider how race was recorded and represented in the explosion’s aftermath. Brenton Allison (fatality 1197) for example, was listed as “coloured” and five individuals were reported as killed either in or residing in Africville.

With the use of simple tools like Google Maps and Excel, I am exploring questions such as: Which Halifax and Nova Scotian communities were most impacted by death and destruction? “Communities” will be defined by geography, race, religion, class, sex, age, occupation, and even cause and location of death. This sort of data will allow us to explore the (nearly proportional) gender distribution of victims and ask questions like: how did the location of the Explosion determine this gender distribution across victims? Recording victims’ place of residence will illustrate that victims were not only Haligonians but came from across the province, country, and world, even as far as China. What impact did their loss have on their own communities? Instead of the shared emotion of loss only being felt in Halifax, it was also other communities that felt the tragedy of death. 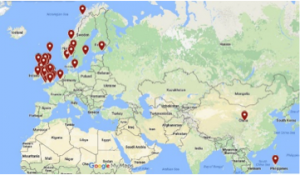 Going forward, there are many more perspectives to be explored. For instance, visualisations showing the relief (supplies, personnel, and money) sent to Halifax from local, provincial, national, and international sources, will be produced. An added benefit is that, unlike the Halifax Explosion Remembrance Book, HExD will permit searching/exploration by various categories like community or location (rather than just by victim’s name). In addition, each person will be represented by a plot point on the map which will then reveal further information. A meaningful outcome of the project will be the representation of all victims in these statistics; a departure from previous historical analyses that preference the narratives of a few and allow them to speak on behalf of the whole. 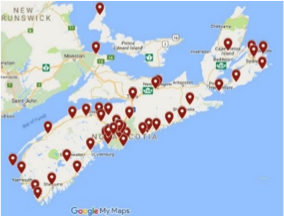 While this is just a work in progress, there is still much to be done. In its first version, HExD is limited to those who perished as a result of the Halifax Explosion. There are thousands of individuals, however, who suffered serious injuries and more again whose homes were damaged; there were also those who participated in relief efforts and those who lost friends and family. Their stories too, need to be compiled and represented. It is certainly my hope to be able to share HExD with the public. In doing so, I hope that we can uncover the untold stories of more individuals who have connections to the Halifax Explosion, particularly those from outside of Halifax. 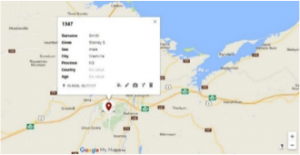 As we approach the 100th year since the Halifax Explosion, we should be using the knowledge and technology gained over the past century to change the way we interpret and remember the explosion. In this day and age, why must we limit ourselves to remembering just 100 stories? Why can’t we include them all? (And any naysayers who think it can’t be done with 2,000 Halifax Explosion victims, just check out the Imperial War Museum’s Lives of the First World War).

Claire L. Halstead, PhD is a Research Associate at the Gorsebrook Research Institute for Atlantic Canadian Studies at Saint Mary’s University. When not working on her two separate digital history projects on the Halifax Explosion and Halifax in the First World War, she is preparing her manuscript on British children evacuated to Canada in the Second World War. Her HExD project is funded by a research grant from the Nova Scotia Museum.

[4] Produced to coincide with the seventy-fifth anniversary of the Explosion in 1992, the clip was both wildly successful and oddly celebratory.

9 thoughts on “HExD: Changing Centennial Commemorations of the Halifax Explosion”