Attempting to identify the historical significance of Vimy Ridge for the general public, many historians, writers and politicians have often resorted to a nationalistic framework that depicts the battle as a vital step in the creation of an independent Canada. From April 9th to 12th 1917, the four Canadian Divisions fought together for the first time and achieved an impressive tactical victory, thereby symbolizing the emergence of national unity rooted in military sacrifice. This straightforward narrative neatly encapsulates the central importance Vimy is expected to hold for modern Canadians and validates the First World War as a necessary conflict because it resulted in the creation of the country we know today. The Veterans’ Affairs website for instance defines the legacy of Vimy as a battle in which, “regiments from coast to coast saw action together in a distinctly Canadian triumph, helping create a new and stronger sense of national identity in our country.” 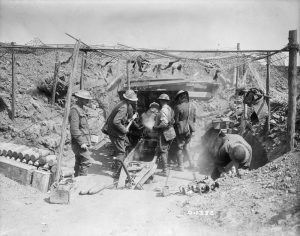 While many historians have effectively challenged the myth of Vimy Ridge as the “birth of a nation,” resisting the tendency to present the war within a nationalistic framework proves difficult because it seems to offer the most accessible point of entry for the public to engage with the past.[i] Reflecting on the immediate political reactions to Vimy Ridge is one way of offering alternative interpretations of the significance of the battle for Canadians today. Rather than demonstrating unity and shared celebration, politicians’ reactions after the battle exposed deep divisions in wartime Canada caused by debates over conscription, aggressive partisanship and accusations of disloyalty.

While on a tour of the front one month after the victory at Vimy Prime Minister Borden met fellow Conservative MP, Captain James Arthurs, who he recorded “is tremendously impressed with what Canadians have done.”[ii] After four months in the field Arthurs retook his seat in the House of Commons in June. Government ministers and the Ottawa press welcomed him back as “one of our heroes of Vimy.” In Arthurs’ first speech since returning from overseas he explained how his experiences had proven, “this is a fight to the finish, a fight for life and death for all democracies.”[iii] Whereas at the outbreak of the war Arthurs claimed he had viewed Canada’s participation only in helping to defend the Mother Country as part of the British Empire, by summer 1917, he argued Canada’s very existence was at stake.

A hardware merchant, self-styled gentleman and MP for Parry Sound (1908—1935), Arthurs had recruited the 162nd (Timber Wolves) Battalion in 1916. Like nearly all late-war infantry battalions, the 162nd was broken-up upon arriving in England to provide reinforcements for front line units. Unlike many former commanding officers, the fifty-year old Arthurs managed to overcome age restrictions and reverted in rank from lieutenant colonel to captain. Arthurs joined the 1st Battalion in February 1917 and served as a platoon commander during the attack on Vimy Ridge.

Arthurs’ speech to the House of Commons in June 1917 pointed to a belief that the war had validated the dominion’s influence and importance: “We have boasted, with good reason, that our Canadians blocked the way to Calais, that they were in the forefront on the Somme, that they took the famous Vimy Ridge. Are we going to quit now?” Praising the soldiers who had accomplished these great victories, Arthurs declared, “I have seen them die, bravely, cheerfully facing the enemy and cheering for Canada. The cemeteries of France shall always be dear to Canadians.”

Arthurs’ remarks could seemingly support a notion that contemporary politicians recognized Vimy as a unifying event in Canadian history that would inspire future generations with pride and celebration. But such an interpretation ignores the primary message of his speech and the broader political context in Canada during spring and summer 1917. Advocating in favour of the conscription bill, Arthurs had delivered a strongly anti-Quebec speech that denounced the province for failing “to do her duty.” Referring to the volunteers he had recruited, Arthurs explained, “The French Canadians who went overseas with me and who fought in France, were as good as any other soldiers and were true Canadians. The unfortunate thing is that we have not enough of them.”

From Arthurs’ perspective “true Canadians” were those who had put on a uniform and served on the front lines. Any man seen to have refused to volunteer was considered separate from their patriotic countrymen. Overlooking the fact that many English-speaking Canadian men had not volunteered and would readily appeal for exemptions upon the passage of conscription, Arthurs asserted, “in some parts, particularly the province of Ontario … every available man had gone to the front.” The problem appeared clear: Quebec had not done its share.

While praising the “20 or 25” French Canadians who had enlisted in his own battalion, Arthurs regarded most with suspicion and contempt. He claimed French Canadian recruits “made all sorts of excuses to procure their discharge” by pretending “to suffer from every disease from lunacy to housemaid’s knee.” Others enlisted in multiple battalions only to desert each time. Desertion he argued accounted for thousands of French Canadian “slackers” who evidently needed to be compelled to do their duty. Arthurs reserved his strongest criticism for the Opposition members:

Quebec Liberals reacted to what they viewed as reckless partisan rhetoric that threatened to tear the country further apart. Jacques Bureau, MP for Three Rivers and St. Maurice, who resented the allegation of mass French Canadian desertions, stated, “Sir, is that noble, is that generous, I ask you, is that British—is it even decent? I say no.” A fellow Liberal interjected, “It is German.” E.B. Devlin, MP for Wright, pointed out that the aggressive and insulting tone of Arthurs’ speech would “have more to do with inciting the people of Quebec against conscription than anything else I know of.” Devlin suggested the government might have adopted the slogan, “Win the war and damn Quebec.”[iv]

Other Liberals argued Arthurs’ views revealed the actual cause for lower enlistment in Quebec as no French-speaker would wish “to go to the front under an officer who speaks of the French race so disrespectfully.” William Power, MP for Quebec West, whose son won the Military Cross in 1917, fumed against Arthurs, “the so-called hero of Vimy Ridge who stated he said good bye to hundreds of his men at the front. Why did he leave, what for? Was it to come to his House to raise passion and prejudice against the province of Quebec, and to be acclaimed as a hero?”[v] 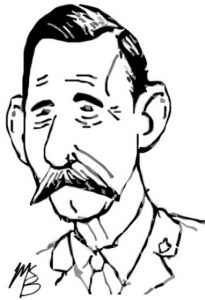 As an elected representative and former battalion commander who felt responsible for many of the men recruited, Arthurs believed he conveyed the sentiment of “ninety-nine percent” of the soldiers at the front in supporting conscription. His own son was serving in the trenches and had tried to convince his father that field conditions would prove too stressful. By the time Arthurs returned home he was suffering from the mental and physical effects of even this abbreviated service and complained of nervousness and sleeplessness into the 1920s.

For Pierre-Joseph-Arthur Cardin, MP for Richelieu, Arthurs’ rhetoric, which divided the country between those deemed loyal and disloyal, undermined the very cause for which he claimed Canada fought:

It was painful to hear from the lips of the hon. member for Parry Sound such base and despicable accusations … It seems to me that this gentleman who is a military man, who has been overseas and was a witness of the valour of the French Canadian soldiers, should be the last one to fling abuse in the face of the compatriots … Colonel Arthurs deserves much more credit and consideration for the part he has taken in the victory of Vimy than he deserves for the mean work he is doing for the benefit of his party just to help it to win an election victory.[vi]

On 29 August 1917, Parliament passed the Military Service Act to immense opposition from Quebec. The divisive tactics of the Union Government during the December federal election further escalated political tensions which culminated in protests, fatal riots and arrests in Quebec City during spring 1918 just one year after the capture of Vimy Ridge.

Presenting Vimy as a moment of national unity obscures the complicated political context in which the battle occurred and overlooks how celebration of the victory intersected with the conscription debate. Emphasizing a sense of collective identity that some soldiers may have expressed in accomplishing the impressive feat also excludes the many more Canadians who had not served in uniform or participated in a military capacity. Defining national identity in terms of military sacrifice alone also risks reinforcing Arthurs’ assumption that “true Canadians” eagerly volunteered while others had been mere “slackers.” The hundredth anniversary of the battle should provide an opportunity to consider the process of national myth-making and provoke deeper critical thinking over the political and ideological uses of history. Investigating and challenging nation building myths like Vimy Ridge allows scholars and the public alike to explore a more diverse range of historical perspectives and interpretations.

[iii] House of Commons. Debates (26 Jun 1917), 2654-2660. The following quotations of Arthurs are from this Commons speech. The comments of other MPs are also from the House record.

One thought on “National Disunity and the Meaning of Vimy Ridge”