Debates over “renaming” Canadian buildings, universities, and other institutions have generated significant attention in the media over the past several weeks. On National Indigenous Peoples Day, Prime Minister Justin Trudeau declared that the Langevin Block on Parliament Hill would be renamed the more perfunctory Office of the Prime Minister and the Privy Council. Trudeau cited Sir Hector-Louis Langevin’s involvement in the residential schools system as the primary reason for the building’s name change. In early July, the Ryerson Students Union and Indigenous Students Association similarly gained attention for their proposal to change the name of Ryerson University. They also cited Egerton Ryerson’s complicity in the residential schools system as the motivation to change the university’s name. That same week, a hostile confrontation between the right-wing “Proud Boys” and Indigenous activists at Halifax’s Edward Cornwallis statue on Canada Day sparked renewed calls for the statue’s removal. All these events prompted pundits to try to explain just why Canadians seem to be obsessed with the “politics of renaming.”

The critics of renaming generally cite the same list of arguments. Renaming institutions or removing statues effectively erases history. The men (for it is almost always men) commemorated in these places must be understood in the context of their time. By removing their names, you are robbing future generations of learning about their past. Why, they may even be doomed to repeat it.

These criticisms have been addressed elsewhere. My contention is that referring to this process as “renaming” or “removal” indirectly supports the aforementioned criticisms. “Renaming” implies a loss. “Removal” implies that something is being destroyed to make room for something else. Describing this process as renaming, I think, is misleading. The different sites contested by activists have had many names, long before buildings and statues honouring British and French politicians occupied these spaces. The land now known as Halifax and Cornwallis Park had names and meaning before Cornwallis arrived and occupied that land. To call for the statue’s removal and park’s name change, for instance, is not an act of renaming that space, but rather an act of reclaiming it.

As Tabatha Southey recently pointed out, renaming is not a “modern phenomenon.” Many other countries have engaged in the renaming process, including Canada. In fact, the last four hundred years of Canadian history contain countless instances of renaming. It may shock columnists who decry the “twitter mobs” proposing name changes to discover that they often live on streets and in cities that have fallen prey to the alarming process of “renaming.” 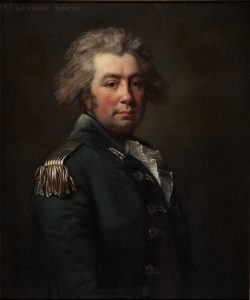 One of the most notorious proponents of renaming in Canadian history is, in fact, not young university students, but rather John Graves Simcoe. Simcoe, Upper Canada’s first Lieutenant Governor, spent the 1790s renaming various bodies of water, roads, and communities in Upper Canada with British titles. He effectively replaced Indigenous names for these places with new names referencing British people and locations instead. Simcoe developed such a reputation for renaming that Mohawk leader Thayendanegea (Joseph Brant) is said to have wryly commented on Simcoe’s love affair with British names. When asked to assess Simcoe’s legacy in the province, Brant stated that Simcoe “has done a great deal for this province, he has changed the name of every place in it.”[1] Brant realized that replacing, or renaming, Indigenous places with British names was just another feature of Simcoe’s effort to colonize Upper Canada.

Simcoe’s names and traditions continue to dominate Ontario’s landscape. I currently live in London, Ontario, where Simcoe’s legacy is still apparent. London, originally known to the Anishinabeg as Kotequogong (“at the forks”), remains rife with references to Upper Canadian and British administrators. In 1793 Simcoe renamed the river that runs through London the Thames River, whereas it was previously known as Deshkan Ziibi (“Antler River”) in Anishnaabemowin. The streets that accompanied London’s colonization reflected Simcoe’s British roots, not the Indigenous inhabitants who already had names for the area. The streets surrounding the Deshkan Ziibi became known as Dundas and Ridout Streets, in honour of Colonial Secretary Henry Dundas and land surveyor Thomas Ridout respectively. Activists calling for the Thames River to be referred to as the Deshkan Ziibi can hardly be accused of “renaming.” Instead, this action would reclaim its original title.

A recent Globe and Mail column by Peter Shawn Taylor tried to contribute to the renaming debate by using a guideline created by American historian John Fabian Witt. Yale University asked Witt to help them decide whether they should rename Calhoun College, which its students rightfully pointed out was named in honour of a pro-slavery South Carolina senator. Witt then devised a test to help him determine whether Calhoun College should be renamed. Part of his test included examining whether Calhoun, or any other figure at the center of a renaming controversy, had a “principal legacy” that was at odds with contemporary values and/or faced criticism for his views during his lifetime. Taylor’s column applied Witt’s theory to Hector-Louis Langevin and concluded that Langevin’s name should not have been replaced. After all, he argued, Langevin’s “principal legacy was building a bicultural Canada, something once considered a great virtue in this country.”[2]

Who gets to determine what the “principal legacy” of a historical figure is? While historians can debate which historical figures, if any, can shoulder the title “architect” of the residential schools, it is less clear who can determine someone’s primary legacy. As activists, politicians, and media personalities engage in these debates, it becomes quickly obvious that the past is too complicated to be reduced to a single principal legacy or lesson. While English and French Canadians may see Langevin’s “principal legacy” as promoting biculturalism, Indigenous people may rightly see his principal legacy as complicity within a system that perpetuated cultural genocide. English Canadians in Halifax may see Cornwallis’s legacy as “founding” Halifax, while the Mi’kmaq may see his principal legacy in a very different light. The politics of renaming, or reclaiming, cannot be reduced to a simple test. Under the guise of objectivity, Witt’s test only serves to reinforce the very power relations that marginalized people aim to upset through the process of reclaiming institutions and places marked by their oppressors.

As historians are called upon to provide context to the debates surrounding name changes, I believe we need to point out that name changes are not a recent phenomenon in Canada. If examined from the perspective of Canada’s long history prior to European contact, it becomes clear that many debates over name changes are actually engaging in reclaiming rather than renaming. Conceptualizing these debates as a process of reclaiming better highlights the goals of often marginalized activists, and avoids reinforcing the image of loss inherent in the vision of their critics. While these disagreements often focus on the specific character or morality of the historical figure in question, historians should remind the public that these spaces, be they literal or ideological, have been known by many names and by many people throughout Canada’s history. Reclaiming those spaces through removing names, statues, or other symbols is more often a return to that place’s historic roots than those decrying the erasure of history often realize.

Elliot Worsfold is a PhD Candidate in the Department of History at Western University in London, Ontario.

One thought on “The Politics of Reclaiming, Not Renaming”