As part of our History curriculum series, and as a complement to December’s post on collaborative curricula, Cynthia Wallace-Casey discusses New Brunswick’s unique diverse, regional, and bilingual approach to History and Social Studies curricula. 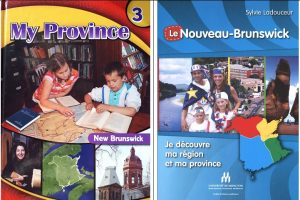 As the only officially bilingual province in Canada, New Brunswick holds a unique position regarding history education and collaborative curriculum development. In this province, it is as if we stand between two linguistic divides—with one foot firmly planted in English-speaking Canada, and the other confidently placed within a French-speaking world. This is because, unlike other provinces and territories in Canada, New Brunswick maintains two distinct education systems that are separate and equal. This distinction is not just a privilege, but a right: a right that is firmly embedded within our Charter of Rights and Freedoms. As indicated in section 16.1 of the 1982 Constitutional Act of Canada:

(2) The role of the legislature and government of New Brunswick to preserve and promote the status, rights and privileges referred to subsection (1) is affirmed.

In this sense, education and cultural identity operate hand-in-hand. For each linguistic group, school is not simply about “making the grade,” it is about preserving and promoting social responsibility to two linguistic communities.

While there was a question posed last month if there should be national history standards, I believe that adopting a common national narrative will simply lead us into yet another “History War” about what students need to know about Canada’s past. We have witnessed over and over again, common national narratives, by way of their very nature, become exclusionary. Take for example, the recent CBC production of Canada: The Story of Us, which drew heavy criticism for the histories that were left out. Another example is Canada: A Peoples’ History, which Margaret Conrad (2001) has so eloquently slammed as exclusionary of Atlantic Canada. I agree with her when she argues that “My history includes the Atlantic Provinces.”

Likewise, on a national level, the historical perspective of Francophones within Canada cannot be summarized as same for all. New Brunswick’s French linguistic community, for example, does not share the same colonial experiences as other Canadians—and even within this community there exist regional distinctions between Brayons and Acadians. Within the complex world of linguistic and cultural divides, settler colonial interactions with Indigenous peoples were not historically the same either. In the building of such national narratives as A Peoples’ History and The Story of Us, these are the voices that are too often lost. These are the voices that can be found, however, through place-based history education.

In the region of English-speaking Atlantic Canada, the provinces of New Brunswick, Newfoundland and Labrador, Prince Edward Island, and Nova Scotia, have been working together through the Council of Atlantic Ministers in Education and Training (CAMET) since 1993 to establish a shared social studies curriculum.

Their objective is threefold: 1) to improve the quality of education for all students through shared expertise and resources; 2) to insure that the education that students receive across the Atlantic region is equitable; and 3) to meet the needs of both students and society (CAMET, 1999).

The resulting Foundations document for Atlantic Canadian Social Studies was first published in 1999 and authors credit their inspiration from the 1994 Curriculum Standards for Social Studies in the United States (CAMET, 1999, p. 1). Since this first publication, however, the Atlantic Canada Foundations document has been revised to adopt Seixas’ (2006b) concepts for Historical Thinking.

While the current curriculum framework continues to evolve as a collaboration-in-progress, it provides a valuable model for standardization (as Cutrara has already pointed out), because it shows how provinces and territories can work together (as a region) to adopt a common methodology for historical inquiry.

Likewise, this same curriculum framework also demonstrates how uniqueness need not be forfeited in the process. This is because each of the Atlantic provinces has adopted a place-based approach to historical inquiry. The resulting curriculum framework is deeply rooted in the perspective of where students live. As such, the curriculum (up to grade 9) is primarily student-centered and driven by students’ interests. It is also structured around key-stage outcomes (targeting grades 3, 6, 9 and 12) that are formative in nature. These features provide for a great deal of pedagogical space in recognizing regional diversity. How this curriculum plays out in the classroom, for example, is through such activities as Heritage Fairs (supported by Canada’s History Society) that are very popular in Atlantic Canada. Ultimately, by grade 9, all English-speaking students within each province learn that Atlantic Canada is interdependent—and functions as a unified regional community within Canada.

The social studies curriculum for New Brunswick’s French linguistic community is distinct from that of the Anglophone world. It does not draw from the Atlantic Canadian framework, but rather a pan-Canadian framework for cultural appropriation in French-speaking schools in minority settings (CMEC, 2012). Guided by Canada’s Charter of Rights and Freedoms, New Brunswick affirms a legal responsibility to maintain distinct and equal educational institutions for two linguistic groups.

French language educators in this province recognize that language is much more than a communication tool: language also serves as a tool for learning, thinking, and identity-building. How this philosophy plays out in the primary level social studies classroom, is that New Brunswick’s French-as-a-First-Language schools have not been so quick to adopt Seixas’ (2006b) concepts for Historical Thinking. Instead, Francophone educators favour a model for Historical Consciousness that more closely resembles Catherine Duquette’s (2012) taxonomy for historical thinking, which in turn correlates with Seixas’ (2006b) six concepts of Historical Thinking. This reflective taxonomy begins with a problem—which leads to a question—that initiates critical historical inquiry—and ultimately leads to re-evaluation of the original problem. 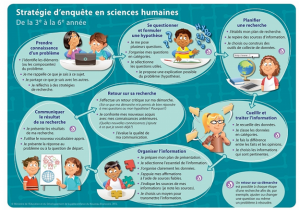 New Brunswick’s French linguistic community represents approximately one third of the province’s entire student population. It shares a unique historical experience that is distinguished as Acadian. Acadia historically represents a geographical area that includes present-day New Brunswick, Nova Scotia, and Prince Edward Island. Acadians trace their colonial history back to 1604, when the first attempted permanent French settlement in North America was established on Saint Croix Island (near present-day St. Stephen). Significant benchmarks in their history include The Great Deportation of 1755-1759, a 19th century Acadian Renaissance, and 20th century Language Rights. These historical experiences have led New Brunswick’s French linguistic community to develop a curriculum that features a uniquely Acadian perspective on the past.

This curriculum draws heavily upon timelines as a way of contextualizing the past, and identifies specific vocabulary that students are expected to master at specific grade levels. By grade 12, as Marc Robichaud (2011) has found, students demonstrate a well-established sense of their Acadian identity (even if they have not studied Acadian History in grade 12) and that the narratives students adopt are very different from those of their French-speaking counterparts in Quebec. Acadian students remember the past as a triumphant “long march to equality.”

Translation: In a world where grand narratives have a hard life and where new myths replace the old, young francophones surveyed in this study perpetuate an image of Acadia shaken by 1755 [the Acadian Deportation] but since rebuilt in its own way.

By grade 12, as Marc Robichaud’s findings suggest, French-speaking students within New Brunswick have learned that they are part of an Acadian diaspora—that transcends provincial borders and functions as a unified regional community within Canada.

How can uniqueness be found within Canadian History curricula?

The duality of New Brunswick’s education system has much to offer the rest of Canada. In responding to Samantha Cutrara’s question: How is uniqueness found within a collaborative Canadian History curriculum? I give you the example of my province, where collaboration can lead to common methodologies for historical inquiry. At the same time, uniqueness is upheld in New Brunswick through respect for regional and linguistic diversity.

New Brunswick’s example demonstrates that, on a national level, we need not adopt a common national narrative for Canadian History—that by its very nature becomes exclusionary; we can, however, adopt a common national language for historical inquiry. The Historical Thinking Project provides educators with a starting point for such collaboration, but it is only a starting point. More empirical research is required at an academic level, as to how these Historical Thinking concepts are employed in students’ places of learning (both in the classroom as well as the community): What are the national narratives that students construct? Are there distinctions between linguistic groups? Where are the national standards for assessment in history education? And how does Historical Thinking specifically prepare students for 21st century citizenship?

Dr Cynthia Wallace-Casey is a SSHRC Postdoctoral Research Fellow at the University of Ottawa (The Making History Education Research Unit). She is currently investigating difficult knowledge, national narratives, and Historical Thinking in history museums. Her academic work can be view here: https://uottawa.academia.edu/CynthiaWallaceCasey

Note: The author would like to acknowledge that this work was created on the traditional unceded territory of the Wolastoqiyik. This territory is covered by the “Treaties of Peace and Friendship” which Wolastoqiyik and Mi’kmaq peoples first signed with the British Crown in 1725. The treaties did not deal with surrender of lands and resources, but in fact recognized Mi’kmaq and Wolastoqiyik title, and established the rules for what was to be an ongoing relationship between nations.

Seixas, Peter (2006a). What is historical consciousness? In R.W. Sandwell (Ed.), To the past: History education, public memory, and citizenship in Canada (pp. 11-22). Toronto: University of Toronto Press.

Seixas, Peter (2006b). Benchmarks of historical thinking: A framework for assessment in Canada. Retrieved from: http://historicalthinking.ca/sites/default/files/files/docs/Framework_EN.pdf