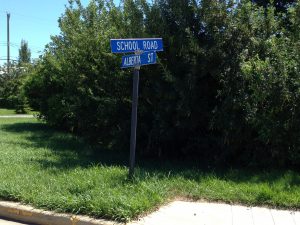 Intersection of School Road and Alberta Street in Trochu, Alberta

Based in “progressive” child-centered, inquiry-based curriculum reform that began in the mid-1930s, Alberta is the only province that requires students to take issues-centred, interdisciplinary Social Studies courses through to the end of high school. The current Alberta K-12 Social Studies Curriculum was introduced in stages from 2005-2009, and history is one of six interrelated “strands” that reflect the nature of social studies as an interdisciplinary subject. Alberta also has a mandatory social studies diploma exam in Grade 12 that is worth 30% of students’ final mark, and mandatory social studies Provincial Achievements Tests in grades 6 and 9.

Canadian history topics are introduced thematically in different grades throughout the K-12 curriculum, which has led to critiques of the curriculum for over-privileging thematic approaches and disregarding chronology. For example, in grade 2 students learn about three Canadian communities: Iqaluit, Meteghan, and Saskatoon, and one of the foci are the changes in those communities over time. In grade 4 students learn about the land, histories, and stories of Alberta, and in grade 5 students learn about the land, histories, and stories of Canada, including an examining Canadian identity. In grade 6 students focus on historical models of democracy including the Haudenosaunee Confederacy, and in grade 7 the curriculum focuses on the origins, histories and movement of people both before and after Confederation. Grade 9 includes a few isolated topics in Canadian history including the Indian Act and treaties 6, 7, and 8. The three compulsory senior high school courses are organized around multidisciplinary investigations of globalization in Grade 10, nationalism in grade 11, and ideology in grade 12. Canadian history topics are interspersed in these curricula, but not in any systematic or comprehensive way.

In June 2016 the Alberta government announced an ambitious six-year, $64 million plan to simultaneously rewrite all subjects in the K-12 curriculum. The official rationale was that the previous curriculum was out-dated, it did not focus on strengthening student competencies like critical thinking, communication, and problem solving, and each subject area needed to include more Indigenous content and perspectives. While this rationale applied to some subject areas, it did not apply to social studies, which was one of the most recently updated in Alberta. Furthermore, the current social studies curriculum already is “competency focused” in that the skills and processes included are remarkably similar to the eight competencies highlighted in the proposed curriculum. Although the scope and sequence and content needs updating in terms of adding Indigenous content and interweaving Indigenous perspectives and ways of knowing, Indigenous as well as Francophone perspectives are foundational to the current curriculum, which could have been updated without rewriting the entire curriculum.

In 2015 the Alberta Teachers Association (ATA) conducted a comprehensive survey of 498 K-12 social studies teachers in Alberta, and the 2016 summary report entitled “The Future of Social Studies— The Voices of Alberta Teachers” provided important insights, conclusions, and recommendations for the Alberta social studies curriculum. Teachers broadly supported the need for curriculum change in social studies, and in particular noted the negative impact that standardized assessment policies and practices has on students’ learning. It is unclear whether the recommendations and concerns elicited in the survey are being considered in the design of the new curriculum.

The curriculum writing process in general, and the social studies curriculum in particular, has been highly politicized in Alberta. After the social studies subject introduction and scope and sequence were released in May 2017, United Conservative Party leader Jason Kenney criticized the curriculum for the absence of Canadian military history, and accused the NDP government of attempting to “socially engineer” students in the new curriculum. Others have panned the government for not including enough university subject area experts in the subject area CWG, for having to many left wing education professors as part of the CWG, and for refusing to release the names of the 409 CWG members. In order to clear up some of the myths about the curriculum writing process, we co-wrote an op-ed in the Edmonton Journal last October. 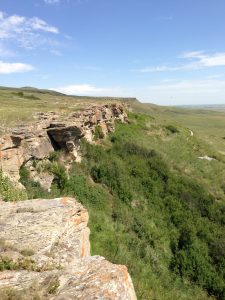 Dr. Lindsay Gibson is an Assistant Professor in the Department of Elementary Education at the University of Alberta.

Dr. Carla L. Peck is an Associate Professor in the Department of Elementary Education at the University of Alberta. Find more about her work on her website: https://www.ualberta.ca/education/about-us/professor-profiles/carla-peck