Following the end of the First World War, representatives of the Allied and Associated nations agreed that a medal, which would be officially known as the “Interallied Victory Medal,” would be awarded in commemoration of victory over Germany[i].  In all, approximately fourteen million bronze medals suspended by distinctive double-rainbow ribbons symbolizing “calm after a storm” were distributed; their designs varying depending on the country of issue. More than six million Victory Medals were awarded to British soldiers and combatants from its colonies.  Sergeant William A. Alldritt, whose experiences during the war have been written about here and here, was one of the 351,289 recipients from amongst the Canadian Expeditionary Force.[ii]  The British version of the medal that the Canadians received depicts a winged female figure traditionally representative of “victory,” while the reverse is inscribed “The Great War for Civilisation 1914-1919.” 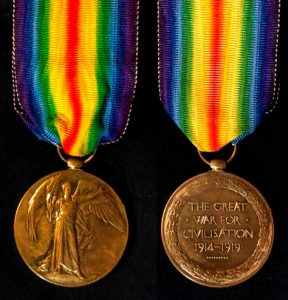 The Interallied Victory Medal. (Author’s image – as are all images in this article.)

Why did it state “1919” when the Armistice came into effect on November 11, 1918?  In part, the answer is that the official peace did not come until the Treaty of Versailles was signed midway through 1919.  The later date also correctly recognized that the Armistice did not mean an immediate end of service for many of Canada’s overseas forces.

Following much debate in Parliament it was decided that all Canadians should be repatriated through England and the logistics for the repatriation of more than a quarter million soldiers was complicated.[iii]   Most Canadians were sent to demobilization camps in England and Wales to await their transportation to Canada for discharge – including camps in Witley, Ripon, and Kinmel Park, where some soldiers began riots out of frustration with the delayed and apparently inequitable repatriation process.[iv]  However, prisoners of war exchanged to Holland, including William Alldritt who had been captive since April 25, 1915, were amongst those who were retained to work into the early months of 1919.

While there was much debate as to whether to return soldiers to Canada on a “first over, first back” principle, decision-makers in the Canadian government were persuaded that it would be desirable to repatriate soldiers by unit, rather than by service seniority, to maintain an infrastructure.  Thus, many of those who currently found themselves providing support services – clerks, cooks, etc. – would be last to return to Canada.  Many of the “Old Originals” who had enlisted during the first days of the war were amongst this number[v].

Included with these “support service” soldiers were the remaining prisoners who had been exchanged to Holland since December, 1917, as part of an agreement with Germany to transfer officers and non-commissioned officers who had been held prisoner for more than 18 months, including Sgt. Alldritt, whose health had been notably compromised by time spent in prison camps and working kommandos.[vi]  Immediately following the Armistice these prisoners were directed to remain in Holland and were tasked with the responsibility to oversee the repatriation of ex-POW’s arriving from Germany; receiving and feeding them, outfitting them in fresh khaki uniforms, and coordinating their transportation to England.[vii] (To see online story maps about Alldritt’s war, go here and here.)

While Sgt. Alldritt wrote in letters home that some of his fellow prisoners had been repatriated as early as September, 1918, only those in the poorest of health were permitted to leave, including Sergeant-Major Stewart, whose “left hand is practically useless” as noted in Alldritt’s letter to his sister Ethel, dated September 7, 1918.[viii]  He also stated that he had inherited Sgt.-Maj. Stewart’s coveted private bedroom: “It is very nice to be able to get by myself whenever I like, it is the first time I have been able to do so for 4 years.” 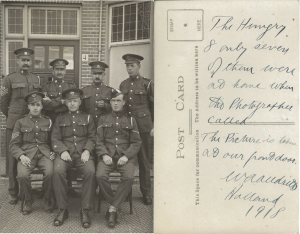 Photo included in Alldritt’s August 21, 1918, letter to Ethel, noted as being taken at their front door.  Sgt. Alldritt back row, left.  Sgt-Maj. Stewart, who was repatriated due to an injured left hand, is noted as seated front row, centre.

Private bedroom or not, Alldritt still wanted to go home.  In a letter to Ethel dated Sept. 13th he stated: “Many of the boys are getting Repatriated, on old wounds and general weaknesses but I haven’t any chance as far as I can tell.  You see the board would not listen to me in any case I look too big and strong.”

News that the Allies were beginning to push back the front lines did get through to the prisoners, and lightened their spirits to some extent.  Alldritt noted in a letter written on September 4th to his future wife Agnes, that he had “a large scale map on the wall and every I day I mark the advance in red paint, many of the boys express their willingness to buy me more red paint if my present supply fails.”

He also wrote to his sister on October 12th “Old Kaiser Bill and his merry men are getting it where the chicken got the axe these days, so we wear a smile that won’t wash off.”

At 11:00 a.m. on November 11, 1918, the Armistice came into effect.[ix]  As early as November 13th, Alldritt wrote a postcard to Ethel noting that he had started work in Rotterdam and it appears that the Rotterdam rain finally did wash off his smile.  He was put up in lodgings at the Hotel Harwich, but it was not until November 21st that he found a moment to write in more detail describing his activities in Holland.  He wrote to Agnes:

Last week I did not get a minute in which to write but today I must send at least a note.  10 days ago I was sent down here to help look after the boys arriving from Germany. Last week all the boys from The Hague went to England and left us here for I don’t know how long, it is not nice but very necessary.  I work every hour of the day and am so tired at night that I actually fall asleep at my meals.  I live at a hotel and am very comfortable except for the everlasting work….  The boys from Germany are in many cases in terrible shape and it is hard to see them in such condition. We do all that is possible and fit them out in Karkie (sic) within 24 hours!  Do not worry if I do not write as I am rushed to death.

The British War Office had arranged for 100,000 prisoners to pass through Rotterdam and a further 40,000 prisoners to be despatched from French ports, en route to England.[x] Private Herbert A. Tyrrell of the Cambridgeshire Regiment had been held prisoner in Langensalza camp since April 1918.  He wrote of “arriving at Rotterdam at 8:00 am [on December 13, 1918], then to the dock sheds where everything was done like clockwork.  We had a feed, cigarette issue, bath and complete change of clothes and kit – everything new, the 1,500 all finished and on the boat… by midnight.” [xi]

Captain Norman L. Wells of the 4th Canadian Mounted Rifles, who was also a prisoner transferred to Holland,[xii] estimated that the new uniforms were being given out at the rate of 625 an hour, by about 30 men working in shifts night and day. Capt. Wells wrote that the officers and non-commissioned officers interned in Holland “…had expected that a staff would be sent from England to undertake the work of repatriation, and were not overjoyed to learn that they were to perform this duty themselves, not only for interned troops, but for all the prisoners still in Germany.”[xiii]

In a letter written to Agnes on December 23rd Alldritt further described the conditions and his duties: “The weather here is something fierce rain and sleet every day without exception, my overcoat has not been dry for 3 weeks and I work inside the freight sheds.  Just think Agnes for 3 weeks here I wheeled trucks in the freight sheds just like a baggage man on the C.P.R. so it was quite a come down for all of us…” 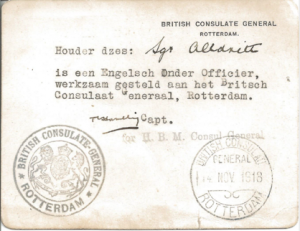 Alldritt’s identity card stating that he was working  in Rotterdam on behalf of the British Consulate.

By the time the letter reached Agnes it had been opened and re-sealed, noted as “Examined by Censor” – a reminder that, despite the cessation of hostilities, Alldritt’s status as a prisoner had still not changed.

Alldritt’s letter to Agnes dated December 8th clearly indicated he thought they were being pushed too far.  His comments support Capt. Wells’ statement that the men interned in Holland wished to be relieved of their duties:

So many of the boys have written to us from England and they are all going back to Canada on leave so we feel kind of out of things.  It isn’t as if it were necessary because it would be very easy to send a staff of men out from England to carry on the work here and let us fellows get home, goodness knows we have been through quite enough without having to stay here for an indefinite period.  I am trying to get home on Monday through the medical board but have very few hopes of doing it…

He ended the letter with a postscript: “P.S. I am very fed up and very tired. Hard work here. Waa.”

Alldritt’s effort to achieve discharge through the medical board was not successful and he continued to work in Holland until he was finally repatriated to England, arriving at Ripon camp in Yorkshire on January 23, 1919, where he was placed on leave.  He intended to visit family in England however the years of imprisonment and labour, both in Germany and after his exchange to Holland, had finally taken their toll.  He noted in a February 24th letter to Agnes that he had been hospitalized at New End Military Hospital in Hampstead for the previous 3 days with influenza; he remained there until March 11th.  On March 12th, he was transferred to 15 General Hospital in Taplow, where he stayed until March 25th recovering from a severe lung infection.

In the end, Alldritt did not return to Canada with the rest of his unit – the 8th Battalion – which departed from England on April 26th  aboard the Empress of Britain.[xiv] He finally made his way  home aboard the SS Caronia, which sailed from Liverpool on May 14th and was discharged from service in Winnipeg on May 26, 1919.  As an “Old Original,” Alldritt’s war lasted from September 1914, to May 1919, dates correctly reflected on the Victory Medal he was awarded.

P.S.  Agnes and William were finally married in June 1920; an event that should have happened years earlier, if not for the war. 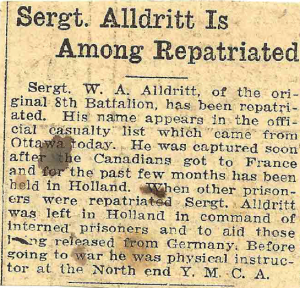 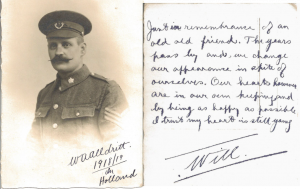 [viii] W.A. Alldritt letter to E.G. Alldritt, from Holland, September 7, 1918. Unless otherwise noted, correspondence is from the unpublished letters of W.A. Alldritt.

[x] Edmonds, Occupation of the Rhineland, 31.

2 thoughts on “First World War Postscript: “Fed Up and Tired” in the Months Following the Armistice”