During the First World War approximately 3000 Canadian soldiers were taken prisoner in Europe. As both Jonathan Vance and Desmond Morton have noted, Canadian POWs typically experienced a combination of monotony, drudgery and depression, often coupled with a sense of shame at having been captured. Accordingly, many POWs felt a driving need to escape, despite the threats of punishment they would receive if they were caught; perhaps evidence of the same spirit of duty and adventure that led them to enlist in the first place.

One prisoner with a strong desire for freedom was Sergeant William A. “Bill” Alldritt, DCM. Sgt. Alldritt was a YMCA Physical Director employed in Winnipeg before (and again after) the war. He enlisted as a member of the 8th Battalion, Canadian Expeditionary Force (90th Winnipeg Rifles), and distinguished himself as a machine gunner during the Second Battle of Ypres, where he was captured on April 25th, 1915. As a POW, Sgt. Alldritt wrote home prolifically. His letters document life in the camps and work kommandos (work parties detached from the main camps) where he was held captive.

Alldritt made at least four briefly successful escapes, always to be recaptured and forced to endure consequences, which included reassignment to punishment camps[1] and forced labour.[2] In one of his later letters home, written when he could write freely, he referred to himself as “one of the most persistent runaways in the country.” [3]

Escape usually required planning, mapping routes, and acquiring tools to move soil or cut through barbed wire. Many of these supplies were sent from home in food parcels that were freely allowed in POW camps, at least during the early years of the war. Requests for these supplies had to be couched in an easily understandable and often highly personal code that friends and family members at home might piece together, but would pass under the watchful eyes of German censors.

Perhaps the earliest and most widely shared example of the use of code words and hidden phrases to request contraband supplies from home was published by Nellie McClung in her popular book Three Times and Out, which was written in 1918 to document the experiences of Private M.C. Simmons. McClung wrote, on behalf of Pte. Simmons:

One of my great desires at this time was to have a compass, for Bromley and I were determined to make another attempt at escape, just as soon as we could, and many an hour I spent trying to find a way to get the information out to my friends that I wanted a compass. At last, after considerable thinking, I sent the following card to a friend of mine with whom I had often worked out puzzles, and who I felt would be as likely to see through this as any one I could think of.

This was the message:

DEAR JIM: – I send you this card along with another to come later, which please pass on to Fred. In next parcel, send cheese, please.

In the address I slipped in the words – ‘SeaforthWds.’ This I hoped the censor would take to mean – ‘Seaforth Woods’; and which I hoped my friend would read to mean – ‘See fourth words’; and would proceed to do so.[4]

Reading only the fourth words in Simmons’ short note yields: “send along come pass in cheese”.

Hiding a compass in a block of cheese was clever, but apparently not unique, as evidenced in a letter amongst Alldritt’s papers, written by Private C.V. Combe to Bill Alldritt’s sister, Ethel. Pte. Combe, who was a journalist in civilian life, poetically wrote:

You know I gave away a large chunk of cheese my mother sent me in Lichtenhorst. When the fellow came to use it he found a fine compass inside it. He brought it back to me, like an honest soul, or I should never have understood the Spartan courage of my good mother… [5]

By this time, November, 1916, Pte. Combe had been transferred from a POW camp in Germany to a convalescent hospital in Mürren, Switzerland, where he began his repatriation process. Combe’s letter provided Ethel with advice as to how she could assist her brother, as he was able to write from Mürren without concern for censorship. 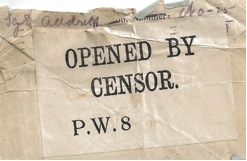 A censor’s stamp on one of Alldritt’s letters home.

Alldritt employed a combination of methods to convey hidden meanings. In some of his letters he used forms of Pig Latin, in some he referred to events that occurred in pre-war Canada, and there are instances where a subtle change in handwriting style was used to communicate a hidden message. Not all of his messages got home intact. Several letters had sentences redacted with black grease pencil, or simply clipped out with scissors. However most of his letters got home unscathed, many stamped with the phrase “Opened by Censor.”

One of his most frequently used devices was a reference to Jack Krafchenko, or simply to “Jack Kraf.” In a January 10th, 1916 letter to Ethel he wrote; “My correspondence has been badly disorganized as I have been a month unable to write: Jack Krafchenko from Rupert St. as an example.” In another letter written on May 15th, 1917 to his former YMCA colleague T.D. Patton, Alldritt wrote; “Jack Krafchenko has written me of three new attempts to start business but owing to the War they have failed, however, he seems to be still hopeful. It is very hard when a man of perseverance is not rewarded with success.” 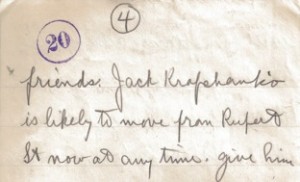 Jack Krafchenko had been a Manitoba fugitive, who staged a “sensational escape” from Winnipeg’s Rupert Street police station on January 10th, 1914.[6] Alldritt used this image of escaping from a secure cell to tell his family that he had managed to escape or was planning an escape. He was confident they would understand this reference to the memorable news story. Alldritt was not alone in employing this reference; at least one other Manitoba prisoner used Krafchenko’s name as well, as documented in a letter reprinted in the Manitoba Free Press:

Pte R.B.K Wilson, a bugler with the Eighth battalion, was wounded and taken prisoner at the battle of Festubert on April 26, 1915, three days after his sixteenth birthday… In a previous letter he intimated in a very curious way that he had failed in an attempt to escape. He stated that the “Krafchenko” stunt had not been successful. [7]

Alldritt himself confessed to the meaning in a May 6th, 1918 letter to his sister written while interned in Holland, and no longer subject to censorship; “I am sure that my cards and letters which I sent from Germany must have been very hard to understand sometimes. For instance when you did not hear from me for a month it was a sure sign I was in jail, of course I would not tell you directly so I used old Jack Kraf’s name.”

Examples of his use of Pig Latin – a children’s language game where words are slightly altered to conceal their meanings – include seemingly nonsensical statements. In a March 31st, 1916 letter to his future wife, Agnes, Alldritt wrote:

Please tell Harry that I expect to receive parcel No. 13 in a few days and am looking forward to the canned salmon as it will be a change to the tinned beef. I wish he would give my regards to Mr. Whirely Kuttersby, who was my best friend the year I spent up in the north Klondike in the old Gold Rush of 1897.

Apparently his brother Harry’s Pig Latin was still fluent, as Alldritt noted in his May 6th 1918, letter from Holland: “In 1916 I had from Harry three tins of salmon that helped me a great deal and I cut lots of wire with the cutters he sent me.”

Alldritt sometimes employed a device where he used subtle shifts in handwriting style (slanting left instead of right) to communicate hidden messages. In the following example from June 22nd, 1916, the shifted words are spread throughout the four page letter seemingly at random, and are underlined below:

Today I have been out on the land cutting sods etc of course I am tired. This letter paper is not good but it is the best I can get. If you pack the boxes carefully they come all right. Never fail to send me well selected prunes they come well and are very good for the health. Dried fruits should be packed in boxes with a little ventilation, Quaker Oats are very good the large boxes are best… Send him my best wishes. Please send me a good cape to keep out rain the slicker kind is best as the German rain is very penetrating. You are so fond of Automobile driving I wish you could see the beautiful Roads of Hannover and Westphalia. I hope to be home this year unless this blessed war never finishes or we get blown off the map.

The message hidden in the stylized words is a blatant request for a road map, cut into pieces and sent in Quaker Oats boxes: “cutting paper come all right packed in Quaker Oats boxes Send me a good German Automobile Roads of Hannover and Westphalia map”. 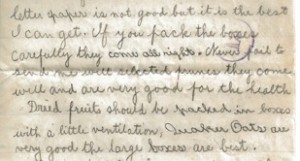 Alldritt’s coded request for a map can be seen in this letter excerpt.

Alldritt wrote his own conclusion to the matter in July, 1918, in a letter to Mr. Patton of the YMCA; “…In fact in my experience, nearly all of my friends were too careful what they put in their letters.” Though his family was usually successful in decoding his messages, some details in his letters still remain mysteries, such as the following lines from a September 1915 letter to his brother Harry:

By the way there is a prune factory on Hargrave or Carlton Street managed by Billy Findlay who pack a good size box suitable for export. If you will buy some of them and pack them carefully in the next parcel you send me I am sure they will be appreciated when they reach me.

There is no record of a prune factory located in downtown Winnipeg during this time.

Robert Alldritt is still trying to make sense of a box of his grandfather’s letters he recently inherited, and is working on an interactive web “story map” chronicling his life of adventure.

[1] As an example, Minden, where he was imprisoned in the Spring of 1916, was considered to be a “repression type of camp” designed to force volunteer labour. Daniel J. McCarthy, The Prisoner of War in Germany, (New York: Moffat, Yard and Co., 1918) pp. 90-92.

[3] W.A. Alldritt letter to Agnes Kennedy, from The Hague, March 24, 1918. Unless otherwise noted, correspondence is from the unpublished letters of W.A. Alldritt.