It sometimes happens that ink used in the preparation of documents will fade resulting in reduced contrast between the ink and substrate (paper, parchment, pottery, etc.), often to the point where the writing is no longer readable.  Ink fading can be caused in several ways including exposure to light, chemical reactions between ink and paper and/or atmosphere, and water and fire damage.  One method for recovering contrast between the ink and substrate is to use imaging techniques involving a variety of light sources, filters and cameras.  Even though the ink may be invisible using normal indoor lighting and our eyes, residual ink may absorb, reflect or luminesce light with colours outside the normal range of human vision. In this post we’ll discuss lighting strategies that allow archivists and historians to recover information from their documents obscured by faded ink.

Light is characterized by its wavelength, which is normally given in units of nanometres (nm). One nanometre is equivalent to one billionth of a metre.  Typically, the range of human vision is from about 400 nm to 700 nm corresponding to the complete range of visible colours from violet to deep red.  Modern digital cameras have been designed to reproduce what is observed with the human eye and contain light filters limiting its operation to this same range of wavelengths.  However, the silicon detector used in the camera is sensitive to light ranging in wavelength from about 300 nm to 1000 nm, where light from 300-400 nm is referred to as near-ultraviolet (UV) and from 700-1000 nm as near-infrared (IR).  By removing the wavelength limiting filter, a camera can be modified to record images in the near-UV and near-IR.

The range of wavelengths of light that are visible with a normal digital camera compared to a modified digital camera where the filter limiting its sensitivity to that of the human eye has been removed.

Although the near-UV and near-IR wavelength regimes are outside of normal human vision, they can be important to animal sight.  For example, many species of bees and birds as well as some species of fish, can see light in the near-UV.  Many plants, flowers, seeds, fruit and feathers appear significantly different in the near-UV which may lead to advantages in food collection and mating.  With respect to humans, near-UV imaging has been used for observing skin damage due to exposure to the sun. 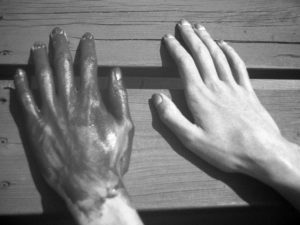 An example of an image recorded in the near-UV.  The left-hand has been coated in sunscreen, whereas the right hand was untreated.  The increase in contrast of the sunscreen compared to normal visible imaging is due to sunscreen being a strong absorber of UV light.

In a similar manner to using light outside the normal range of human eyesight to greatly increase the contrast of sunscreen, near-UV and IR light can be used to increase the contrast of faded ink.  There have been a few famous cases where non-standard illumination and imaging methods have been used to recover faded text.  One example is the examination of the Archimedes Palimpsest, a thirteenth century prayer book made using an erased copy of a work by Archimedes.  Using non-visible wavelengths of light, it was possible to see Archimedes’ original words and diagrams, despite them having been erased and rewritten [1].  Another example was the use of near-IR imaging to restore the diary of late Israeli astronaut Ilan Ramon after the space shuttle Columbia disaster.  The diary, which had been on the shuttle at the time of the accident, was found water damaged and charred a few weeks later [2]

Presented below are some examples of faded text from our work where the contrast of the ink has been recovered to the point of legibility.

The documents were generously provided by the Acadia University Archives and the Beaton Institute of Cape Breton University, and the authours would like to acknowledge the support and enthusiasm of Wendy Robicheau and Catherine Fancy (Acadia University), and Jane Arnold (Beaton Institute) without whom this work would not have been possible.  Thank you.

A section of the Edward Manning Collection Correspondence (Acadia University Archives, year 1819, item D1846.001/1/1/21).  The standard white-light image is shown on the left where significant damage has occurred along the fold.  The image on the right was acquired by shining near-UV light with a wavelength of 357 nm and recorded using the re-emitted light in the visible spectrum, an effect known as luminescence.  Both images were acquired using a normal camera.  In this case, the ink is absorbing the near-UV light and the paper and damage has increased in relative intensity leading to increased contrast.  For example, the word “truths” in the 4th line down is easier to read. 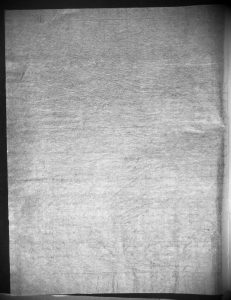 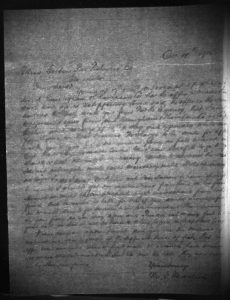 Page 38 of a letterbook of the Baddeck Steamship Company (Beaton Institute, page dated Oct. 19, 1912, item MG14.166).  Again, the standard white-light image is shown above, and the lower image was formed by illuminating at 357 nm and recorded using visible light luminescence.  Both images were acquired using a normal camera and most of the text can now be read. 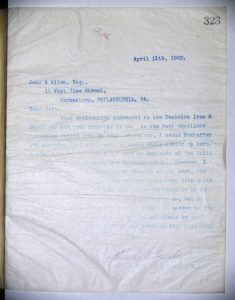 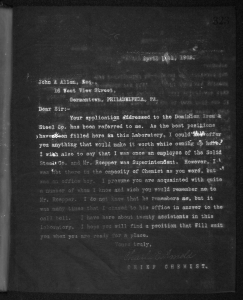 This last example is from page 323 of a Dominion Iron and Steel letterbook (Beaton Institute, page dated April 11, 1902, item MG14.3824) and, rather than being handwritten in black ink, the page was typed using blue copy paper.  The image at the top was recorded using white light and a normal camera, whereas the image below was obtained using red incident light (650 nm) and recorded with a modified camera equipped with a filter that only let near-IR light pass (715 nm and above).  The red light was absorbed by the blue ink, even the residual ink that cannot be seen with the naked eye, and reemitted at a wavelength centred at about 710 nm.  Even when the page is illuminated with the red light, the faded text remains invisible to the eye and can only be recorded with a modified camera that allows near-IR light to hit the detector.

[2]  Sharon Brown and Laser Sin-David.  Diary of an Astronaut: Examination of the Remains of the Late Israeli Astronaut Colonel Ilan Ramon’s Crew Notebook Recovered after the loss of NASA’s Space Shuttle Columbia.  Journal of Forensic Sciences, 52(3):721-737 (2007).

One thought on “Recovering Contrast in Faded Documents”