What did Canadian children think of the Great War? We know they played with war-themed toys and games, read adventure stories and acted out dramas with wartime plots, contributed money and labour to war-related causes, and in some cases lied about their ages in order to enlist[1]… but accessing their youthful thoughts, feelings, and imaginings about the war in their own words is difficult. Norah Lewis’s study of children’s wartime letters to the children’s pages of family-oriented Canadian periodicals offers a rare and valuable example,[2] but locating unpublished materials by children of the Great War period in the archives is a real challenge. Children create relatively few written records to begin with, and those that they do create rarely survive beyond childhood; traditionally, even fewer have passed the “historical significance” test and been preserved in publicly-accessible archives. Those that do often form a very small part of larger family fonds, and are more likely to be discovered by accident than by deliberate searching.

Montreal schoolgirl Kathleen Barry’s 1917 war story was precisely this sort of accidental discovery. Included in one of her schoolbooks, it is housed in the Provincial Archives of New Brunswick, as part of the MC3519 (Janet Toole) fonds. I came across it while processing a new accession to the fonds, during my summer 2017 co-op internship at the archives. MC3519 is a sprawling family collection, comprised of materials relating to Janet and Barry Toole, their ancestors, descendants, and other close relatives. Kathleen Barry was a relative of Barry Toole’s, and a few momentoes of her Montreal childhood and education were passed down to his family. 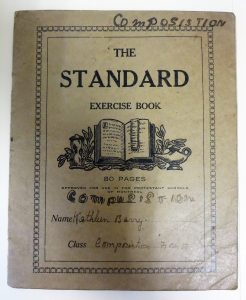 The cover of Barry’s notebook, part of the MC3519 (Janet Toole) fonds, Provincial Archives of New Brunswick. All images by Sarah Glassford with archival permission.

There are only a few school-related items in the fonds to give any sense of what Kathleen was like as a girl. Even the story in question is shrouded in mystery, being undated, unexplained, and unattributed. Yet its content, and a variety of internal evidence, suggest it is an exciting find: an original piece of war fiction, written during the war, by a roughly 12-year old Kathleen.

The story, entitled “Tom’s Return,” is written in a childish but clear hand. [See below for a complete transcription.] There are several reasons to believe that it may have been a creative writing exercise conducted early in the new school year. It is the first entry in a new exercise book labelled “Composistion” [sic], and nearly fills both sides of the first page of the book. Although the story is undated, it is immediately followed by an exercise dated 5 November 1917. The last entry in the notebook is dated 4 June 1918, suggesting that the notebook was used throughout a single schoolyear, and implying that this story may have been written in September or October of 1917.

Every composition inthe book is corrected in red ink and graded, save “Tom’s Return.” Instead, this first composition bears only a single red checkmark at its conclusion. It may have been copy-work, meant to give students penmanship practice, but such exercises usually involved well-known poems or prose, and it seems unlikely that copy-work would be done in a notebook dedicated to composition. There is also a youthful exuberance to the plot and an immaturity in its style that suggest it is the work of a child. Rather than copy-work, this first entry may have been a “free writing” exercise conducted early in the new school year. Such an exercise would give the teacher some idea of the students’ abilities, and serve as a point of comparison for the guided/graded exercises that would follow in subsequent months.

Finally, there are two titles to the story: “Return” at the top of the page, and then “Tom’s Return” beneath it. This could mean that the teacher gave the students a writing prompt (e.g. “Write something on the theme of a return”) or that Kathleen herself began with a broad title, and then decided to be more specific. Either way, it suggests a work in progress, rather than someone else’s polished work copied into Kathleen’s notebook. There is no other war-related content in the notebook, but Montreal’s Protestant/Anglophone schools were avid promoters of the patriotic wartime cause.[3] For all of these reasons, I believe Kathleen Barry to be the author of “Tom’s Return.” The following analysis rests on this assumption. 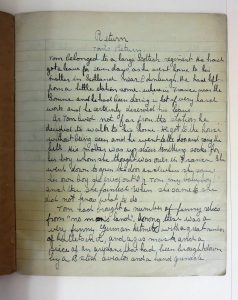 Page one of Barry’s notebook

For such a short story, “Tom’s Return” offers fascinating glimpses of the war through a child’s eyes and raises a number of questions. The first paragraph, for instance, explains that Tom, a soldier, had been at the Somme, “doing a lot of very hard work.” Kathleen was clearly aware of the Somme as the site of major battles. It is unclear, however, whether ‘a lot of very hard work’ is a literal reference to the Iabour involved in tasks like marching, grave digging, and trench-reinforcing (perhaps mentioned by an enlisted friend or relative), a euphemism for fighting, or evidence of uncertainty as to what soldiers in the trenches were doing on a daily basis.”

The third paragraph displays a youthful fascination with the material artifacts of the war, listing different types of weapons and equipment, and implying that two of them are war trophies. Kathleen betrays neither sentimentality nor squeamishness in connection with the death of enemy soldiers, as she cheerfully describes a bullet-ridden German helmet and a piece of a German plane shot down by a British pilot.

Most fascinating of all is the fact that midway through the third paragraph, the story leaves Tom the returned soldier entirely and shifts its focus to an unnamed girl heroine in France. After introducing the “little girl” as the subject of a story Tom told his mother, Kathleen seems to be more interested in the girl’s adventure than in Tom’s homecoming. Despite mentioning No Man’s Land earlier in the story, her knowledge of trench warfare appears rather sketchy: the girl is described as having swum across a river in order to warn a fort full of soldiers that the enemy was planning to attack. (Was Kathleen perhaps thinking of Laura Secord’s famous trek through the woods during the War of 1812?)

But the geographical and tactical unlikelihood of the adventure is not the point. Rather, what is significant is that whereas Kathleen describes Tom rather vaguely as having been “working hard” at the Somme, she goes into detail about the unnamed girl’s heroics: the river is not just a ford, but a ford “in springtime” (meaning it is high, fast, and therefore dangerous); she saves the fort as a stronghold and “a large number of soldiers” who are in it; and the enemy plan to surround the fort is not just postponed but “all broken up.” Kathleen calls her heroine a “brave girl” and notes that she was offered a medal for her efforts. All of this suggests a wish to insert some female content into the all-male narrative of battlefield exploits during the Great War – perhaps even to imagine herself into the story. The unnamed little girl is certainly an example of the kind of “strong female character” that twenty-first century female audiences appreciate.

Yet even in the midst of hijacking Tom’s story and inserting the unnamed little girl’s derring-do, Kathleen fell back on conventional Edwardian gender expectations. Exhausted after saving the fort, the girl “faints and would have died” if not for the fort doctor. When she comes to and is offered a medal she displays the feminine modesty expected of her by downplaying her own heroism, claiming “she had done nothing to deserve it.” 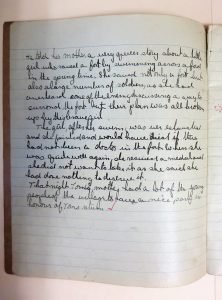 Did Kathleen Barry deliberately subvert her own narrative of Tom the soldier by introducing a girl who outshone him in heroics? Or did she unexpectedly and unconsciously find herself more interested in the adventures of a girl she intended only to mention in passing, than in her story’s putative protagonist? Did she take a keen interest in the war, or was a returned soldier the first thing that sprang to mind in response to a teacher’s writing prompt – the thought sparked, perhaps, by the wounded ex-soldiers returning to Canada in ever-greater numbers by the autumn of 1917? What did Kathleen really know about trench warfare and the weapons of industrialized slaughter?

A century after Kathleen wrote her story, the answers to these questions are beyond our reach. But the act of imagining a little girl into the thick of things suggests that Kathleen Barry – and perhaps many Canadian girls of the Great War era – had a bolder vision of what they might do in wartime than did the adults around them.

Tom belonged to a large Scottish regiment. He had got a leave for seven days, as he went home to his mother in Scotland near Edinburgh. He had left from a little station some-where in France near the Somme and he had been doing a lot of very hard work and he certainly deserved his leave.

As Tom lived not far from the station he decided to walk to his home. He got to the house without being seen and he went to the door and rang the bell. His mother was upstairs knitting socks for her boy whom she thought was over in France. She went down to open the door and when she saw her own boy she cried “Oh Tom, my baby boy!” and then she fainted. When she came to she did not know what to do.

Tom had brought a number of funny relics from “no man’s land”. Among these was a very funny German helmet with a great number of bullets in it, and a gas mask and a piece of an ariplane [sic] that had been brought down by a British aviator and a hand grenade. He told his mother a very queer story about a little girl who saved a fort by swimming across a ford in the springtime. She saved not only a fort but also a large number of soldiers, as she had overheard some of the enemy discussing a way to surround the fort but their plan was all broken up by this brave girl.

The girl, after her swim, was ver [sic] exhausted and she fainted and would have died if there had not been a doctor in the fort. When she was quite well again, she received a medal and she did not want to take it as she said she had done nothing to deserve it.

That night Tom’s mother had a lot of the young people of the village to have a nice party in honour of Toms [sic] return.[4]

[1] Susan R. Fisher, Boys and Girls in No Man’s Land: English-Canadian Children and the First World War (Toronto: University of Toronto Press, 2011); Tim Cook, “‘He Was Determined to Go’: Underage Soldiers in the Canadian Expeditionary Force,” Histoire sociale/Social History, 41, 81(2008), 41-74; Sarah Glassford, “Bearing the Burdens of the Their Elders: English-Canadian Children’s First World War Red Cross Work and Its Legacies,” Etudes Canadiennes/Canadian Studies 80 (2016): 129-50, http://eccs.revues.org/695; Kristine Alexander, “An Honour and a Burden: Canadian Girls and the Great War,” in S. Glassford and A. Shaw (eds.), A Sisterhood of Suffering and Service: Women and Girls of Canada and Newfoundland during the First World War, Vancouver: UBC Press, 2012), 173-194.

[3]Anne Millar and Jeff Keshen, “Rallying Young Canada to the Cause: Anglophone Schoolchildren in Montreal and Toronto during the Two World Wars,” History of Intellectual Culture 9, 1 (2010/11), 1-16.