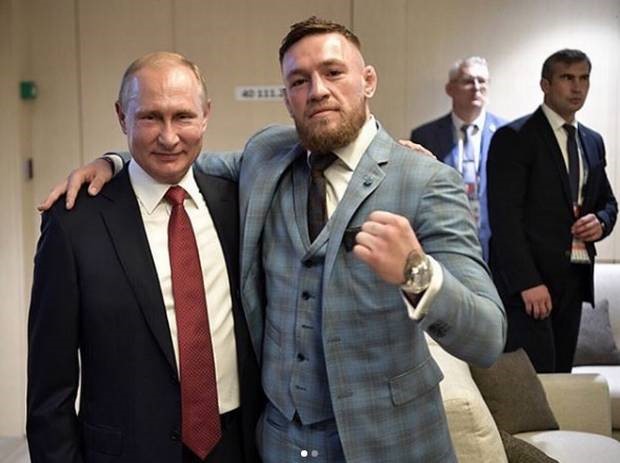 On the 6th of October, the trash-talking Irish superstar and mixed martial artist Conor McGregor was handed a very one-sided loss in his fight with Khabib ‘The Eagle’ Nurmagomedov – a white Muslim man raised in the Dagestani mountains of the Caucus region. When the match was stopped in the fourth round to save McGregor from Nurmagomedov’s relentless combination of grappling and striking (known colloquially as ‘ground and pound’), a melee broke out, which has since become the talk of the sports world. In short, the reason for the melee had to do with McGregor’s antagonizing in the lead up to the fight: Conor called Nurmagomedov a “backwards c— and a “smelly Dagestani rat”; McGregor also accused Khabib’s father of being a “quivering coward” for associating with Chechen president Ramzan Kadyrov.[1] Somewhat alarmingly, heads of state were very present within and around the fight: for example, Conor McGregor was reported and photographed as the personal guest of Russian President Vladimir Putin at the 2018 World Cup, which added to the tensions surrounding the coming match given that Nurmagomedov fights under a Russian flag.[2] Further, in the aftermath of the fight  – that is, following Khabib’s victory and the subsequent melee in which members of Nurmagomedov’s team jumped into the octagon to attack McGregor – Putin defended Khabib and his team’s aggressive post-fight behavior. Just this week, video emerged of Putin telling both Khabib and his father: “If we are attacked from the outside…we could all jump in such a way … there could be hell to pay.”[3]

It is perhaps unsurprising that the McGregor-Nurmagomedov fiasco emerges as a major cultural moment in the wake of conspiracy theories and political controversies surrounding Russian interference in western political affairs. Adding to this complex configuration of white ethnicity, Russian-Dagestani-Chechen relations, and symbolic masculinities is the fact that UFC President Dana White is a well-known friend and supporter of Donald Trump. White sponsored the American president in his electoral bid for office – declaring loudly in a speech at the Republican National Convention of 2016 that “Donald Trump is a fighter! And I know he will fight for this country!”[4] Similarly, the construction and popular image of Vladimir Putin as a ‘fighter’ has been bolstered by his widely reported capabilities in the Russian combat sport of Sambo.[5]

Though the scale of involvement of masculine heads of state in this controversy is unique for the sport of Mixed Martial Arts, it is nothing new to the world of combat sports. German boxer Max Schmeling was often photographed alongside Adolf Hitler after his defeat of Joe Louis in 1936, whereas the giant Primo Carnera – called the ‘Ambling Alp’ by the media of the mid-20th century – was heavily sponsored by Italian dictator Benito Mussolini. In short, masculine heads of state have for a very long time used champions of combat sports as a way to imbue upon their regimes a symbolic masculinity and capacity for violence that was on full display in Putin’s warning that those who attack Russia ‘from the outside’ will have ‘hell to pay.’ Thus, McGregor’s antagonizing of Khabib and the violent reprisal he received both during and after the fight can be productively understood within its proper co-ordinates of white ethnicity and symbolic statehood (as well as the broader history of fighters symbolizing the national character). 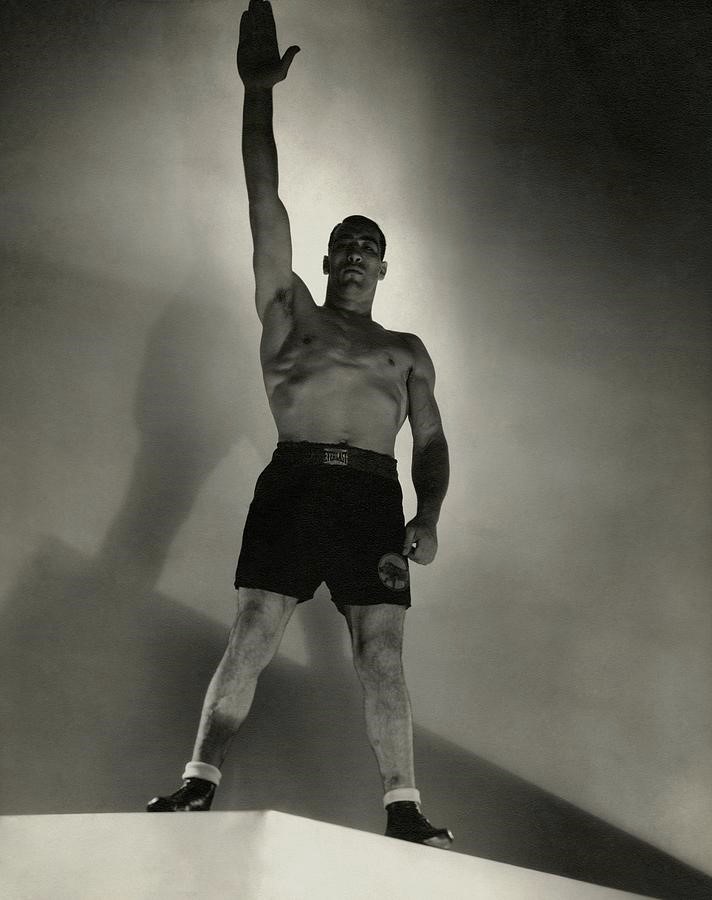 As Will Cooley writes, “race issues are usually just beneath the surface of sports, and boxing, with its naked from-the-waist-up competitors engaging in brutality traditionally elicited palpable racial claims among fans and the media.”[6] Although both McGregor and Nurmagomedov are both white, their particular orientation vis-à-vis orders of global power reveal the ethnic tensions that take place within whiteness as a contested and renegotiated socio-historical category that often coheres around violent contestations of race and masculinity. McGregor’s career has been a literal enactment of this thesis: for example, in a 2015 press conference promoting an upcoming fight with featherweight champion José Aldo, McGregor told a Brazilian crowd: “if this was a different time, I would invade his favela on horseback, and would kill anyone who wasn’t fit to work, but we’re in a new time, so I’ll whoop his ass instead.”[7] McGregor was also the centre of controversies related to anti-Black racism following several questionable comments in his press conferences with Floyd Mayweather.[8] Before losing to Nate Diaz – an American fighter of Mexican descent – McGregor mockingly referred to his opponent as “a cholo gangster from the hood.”[9] These antics of racist ‘trash-talk’ are not unique to McGregor; however, what has happened since this year’s Ultimate Fighting Championship 229 is certainly significant and warrants further critical attention. 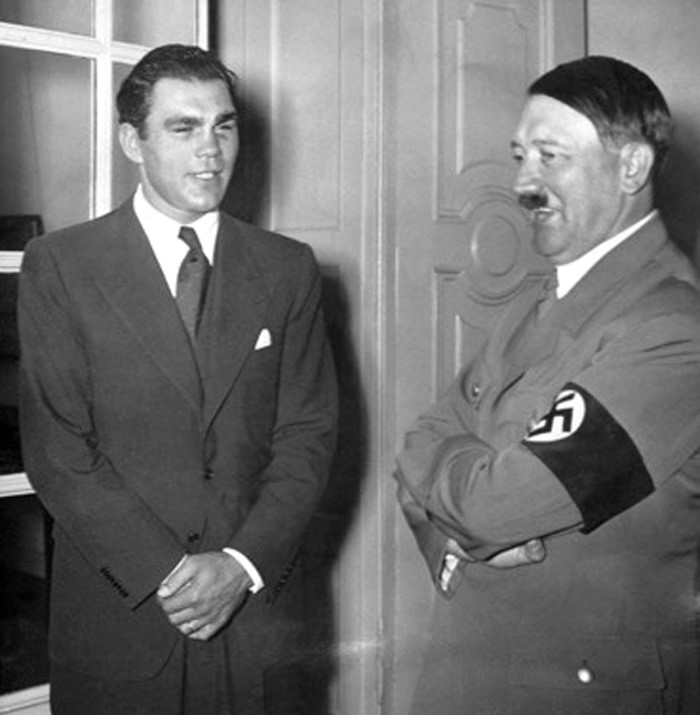 That Khabib Nurmagomedov handily defeated McGregor in a very one-sided match clearly catalyzed a broader moment in the history of sport, politics, and white masculinity, symbolized by his recent meeting with Putin (who previously represented himself alongside the Irishman). This is very reminiscent of German boxer Max Schmeling’s defeat of African American boxing legend Joe Louis in 1936. As Christopher David Thrasher writes:

The startling upset propelled the fight into a place of symbolic importance that few had anticipated. Schmeling received enormous praise from the German press, which had largely ignored him going into the fight. Adolf Hitler sent personal congratulations to the victorious boxer and flowers to the pugilist’s wife. The Reich’s marshal of propaganda, Joseph Goebells, called the bout a victory for all of Germany and Schmeling a national representative. Sportswriters noted the fickle attention of the German leadership, who paid no attention to Schmeling before the fight, but suddenly treated him like an old friend after he bested Louis.[10]

This global discourse of combat sports, race, and nation persists at the time of writing, as both the Russian and Chechen presidents are deploying the image of Khabib to capitalize on a masculine economy of power and violence while also detracting from more serious matters related to human rights violations (particularly in the case of Khadyrov, whose murderous attitudes towards gay Chechens currently constitutes a very serious human rights crisis).[11] 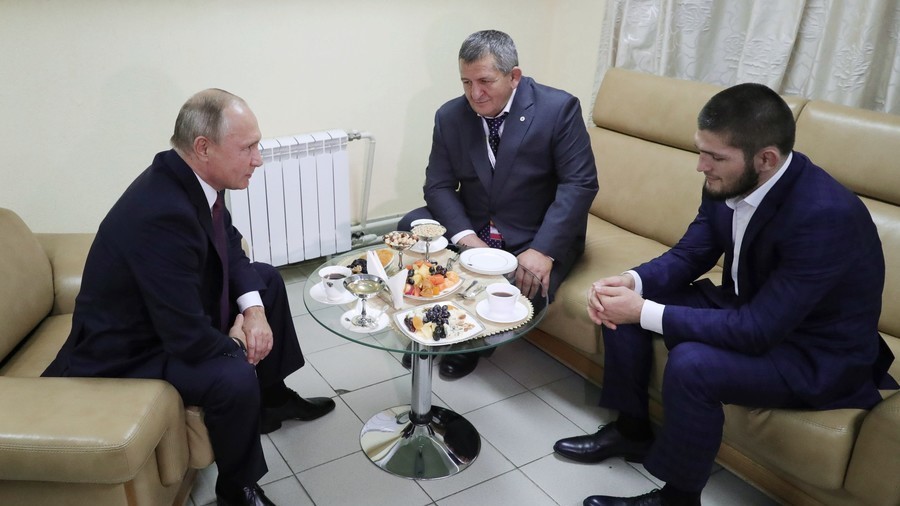 Ultimately, what the fight and subsequent events mean in the contemporary and historical sense is still open to contestation and negotiation; however, what seems clear from recent events is that there exists a long pattern of heads of state recruiting the imagery of tough white men to imbue themselves and their regimes with potent imagery of masculine virility. Thus, while the media storm and controversies surrounding UFC 229 amount to somewhat of a circus, it is clear that the politics of combat sports cannot be meaningfully disentangled from the web of white masculinities and symbolic statehoods in which they are situated. Indeed, the fight and its subsequent coverage remain rich with historical meanings that can help us to chart how performances of masculine violence are made meaningful in relation to larger power relations in the post-Cold War paradigm of geopolitical uncertainty.

Travis Hay is a Postdoctoral Fellow in the Indigenous Learning Department at Lakehead University. His research investigates the settler colonial history of northern Ontario with a particular focus on health and medicine, masculinity, and whiteness.

[4] A video recording of this speech can be viewed at: https://www.youtube.com/watch?v=6RevYxWusgc [accessed 11 October 2018].