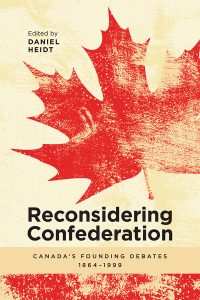 In the lead up to Canada 150 last July, there was no shortage of projects looking at Canada’s political history. One of my favourites was the Confederation Debates project. With a massive team, the project organized, scanned, and digitized thousands of documents related to each province and territory’s entry into Confederation. From there, they created a wide variety of content, including interactive maps that allow you to see what the Confederation concerns were where you live, a Confederation quote of the day, and lesson plans for teachers.

A further extension of that project is the new book Reconsidering Confederation: Canada’s Founding Debates, 1864-1999. Edited by Daniel Heidt, it features an impressive lineup of historians exploring the debates and discussions that surrounded each province’s entry to Confederation. While each chapter focuses on a different province/territory, certain universal issues in Canadian history continue to appear, thus challenging concepts of identity while highlighting some of the core issues that have always existed in this country.

In this episode of the History Slam, I talk with Daniel about the book. We talk about the Confederation Debates project, the team he assembled, and approaches to understanding Confederation. We also chat about Canada as a political entity, concepts of Canadian identity, and what an examination of Confederation tells us about contemporary Canada.