By Arpita Bajpeyi and Sinead Cox

Home is where much of the drama of identity is enacted. Home is where we learn our histories, and it is from these that our concept and connection to a ‘home’ is shaped.

This was one of the themes that emerged during New Histories / Old Roots at the Livery Theatre in Goderich, Ontario on March 23rd 2019 through four diverse performances staged over the course of one evening — all touching on histories of homes lost, found, stolen, divided, and remembered. Each performance approached ‘home’ in a distinct way: through singing and drumming, dramatic reading, film and poetry, and theatre. And from each artist we learned that there is no home, in any sense of the word, without history. 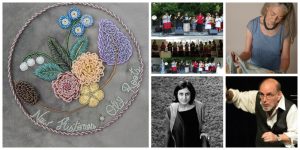 Performers at Staging our Histories 2019

New Histories / Old Roots was the fourth such performance Staging Our Histories has organized — in addition to workshops and conference presentations (including the New Directions in Active History performance keynote in 2015) — since we founded the non-profit organization in 2014 with our co-founder Marie-Anne Gagnon.

Staging Our Histories started as the initiative of three graduates fresh out of Carleton University’s Public History Master’s program. We wanted to create the kind of opportunities that we did not see in the field: to channel the power and immediacy of performance to provide a platform for diverse and untold histories off the page. The calibre of performers and the audience response during our first event — History a(Live) at the National Arts Centre’s 4th Stage in Ottawa– inspired us to continue the project despite international moves and full time jobs in the subsequent years.

New Histories/Old Roots was Staging Our Histories’ second event in Goderich, following autumn 2017’s Unharvested Histories, also at the Livery Theatre. The theme of ‘Histories of Home’ originated with our open call for submissions in fall 2018. As co-directors, we were thinking of political shifts in Ontario and the growing newcomer and refugee communities in places like Goderich. For many reasons, discussions about seeking performances of local and personal histories led us to rethink the nature of ‘home’ and its many permutations– of the loss of home, its construction anew, what it means to find home, or to have multiple homes simultaneously. Of course, the ways in which lines are drawn around communities, to announce who ‘belongs’ and who does not, can be extremely performative.

Aside from Goderich being Sinead’s hometown, we were compelled to return to rural Southwestern Ontario to reach audiences that have less access or platforms for the kind of performances we hoped to curate. We wanted to stage a diversity of stories that would expand, enrich and challenge the prevalent and established historical narratives that codify assumptions about who is and has been ‘at home’ in rural Ontario.

After an introduction by popular local historian and host David Yates, the Warrior Womyn of the Positive Drum opened New Histories/Old Roots with songs in multiple Indigenous languages, including a particularly powerful composition by an inmate of the Kingston Penitentiary that was given to one of the Warrior Womyn. The members, and some of their children, were brought together by the Nokee Kwe Positive Voice program in London, Ontario and represent diverse nations. Over the course of their evocative singing and drumming performance, followed by a talk-back where each artist introduced her nation, it became clear that for the Warrior Womyn home was community. ‘Home is my sisters,’ as one member told the audience. 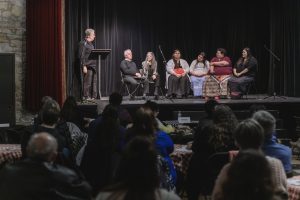 David Yates discusses their performances with Ted McGee, Donna Penrose and some of the Warrior Womyn. Photo by Devin Sturgeon.

The second performance of the night was Donna Penrose’s The Tom and Gertie Letter Project:  dramatic readings from WWI letters that Donna’s grandfather Tom Penrose had sent from the European front to her grandmother, Gertie Middleton, who lived near Whitechurch, Ontario. Donna had been unaware of this family history, or the letters themselves, until they were returned to her by a stranger whose attic they had been occupying for untold years. The compelling story that lay between the pages of Tom’s letters (Gertie’s are all lost) inspired Donna to take up theatre full-time. She was aided that night by her husband Ted McGee, who read Tom’s missives and brought the emotions and homesickness of his words to life, including the young soldier’s increasing disillusionment grieving the loss of hometown friends, as well as his attempts to soothe rifts with his sweetheart at a distance.

New Histories / Old Roots marked a homecoming for the piece, as it was the first time that Stratford-based Donna had performed it in Huron County. With a minimalist lack of set pieces or effects, Donna and Ted emphasized the impact of tangible remnants of the past by having Tom’s uniform cap on stage with them during the performance and talk-back.

After intermission, we were honoured to feature the world premiere screening of filmmaker Smriti Mehra’s piece like Dadima, video and poetry that depicts material layers of the past — a trunk full of her paternal grandfather’s clothes, all too large for her. In the film, Smriti unpacks the trunk, measuring his clothes on her small frame, then proceeds to weigh down a nearby clothesline with one ill-fitting item after another. Tension escalates for the audience with each discard,  as the clothesline moves down, becoming more and more taught under the weight of her dadapa’s clothes, until she finds a single, elegant coat that was her dadima’s, and relishes the fit. ‘Dadima, Papa and Ma / All hoarders[,]’ her poem tells us. ‘I am a hoarder too. / This is my inheritance.’

Home, Smriti told the audience over Skype from Bangalore, India, is the family bungalow — now sold and lost to her — once full of memories and objects that reminded her of people who have passed. The talk-back questions from the host and audience furthered discussion and reflection on the themes of the night. Each talk-back was an opportunity for the artists to share with the audience and each other choices they made in creating their piece, as well as their personal relationship to histories performed. In Smriti’s case, speaking about her family’s migrations and new homes, as well as those in her own life, provided context that enriched and illuminated the the film in hindsight for many audience members. Since our first event in Ottawa, Staging Our Histories has worked with mixed audiences of academics, theatre-goers, history enthusiasts and everyone in-between. For New Histories / Old Roots we consciously promoted the event to the arts community and local history groups within Huron County. 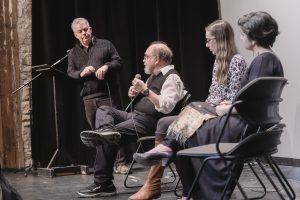 The performances concluded with New Histories / Old Roots’ only returning artist from previous Staging Our Histories events: Henry “Hank” Greenspan. He presented two excerpts from ‘REMNANTS’ and one new piece of theatre created from his decades of oral history interviews and relationships with Holocaust survivors. Alive in Another Life again brought forward stories of homes as families and communities, but of those homes decimated and ripped apart, of the betrayal and transformation of former homes and safe places, survivors left to make sense of the remains. Of gravesites purposefully destroyed and mandated to be forcibly forgotten, but still fiercely remembered. Of defiantly calling in a missing person’s report for family members abducted by the state. The deliberate timing and gravity of Hanks’s stage presence commanded the audience’s attention fully and powerfully on an empty stage with a simple spotlight. His first-person monologues in the voices of survivors cut to what is most painful and human about these stories, of how the loss of home is inexorably the loss of people. This is a story Hank has been telling for a very long time — three decades, in fact — but one that has not lost its relevance in the present moment.

For us, the value of Staging Our Histories’ model lies in that these shows are the only time these artists and histories occupy the same physical space with a single audience. Pieces that were created in complete isolation from one another, and from very different performance and history traditions, suddenly speak and reply to one another, overlap and point to cohesive themes and revelations for the audience. Staging Our Histories collaborates with both established and new artists whose work deals with histories that are typically absent from larger national narratives — stories that tend to focus on personal and local histories, or the continued shadow of history on lived experiences in the present. We have been honoured and thrilled as co-directors to discover time and time again that if you simply ask to hear those stories, you will find them.

Performance collapses boundaries of time, space, and experience. We experience the past in the present in ways that can be performed on or through our body — how we look, dress, walk, which borders we can cross, how we navigate public spaces, what food we eat, what terms we use to define our identity. Trying on a grandparent’s coat, singing a song passed on to us, or sharing a story we were entrusted with. History on stage — history through poetry, song, dance, theatre and more — should be taken as seriously as any history on the page. The last five years of co-directing Staging Our Histories have shown us that there needs to be more stages to provide a home for these histories.

Arpita Bajpeyi is a public historian, kathak dancer and freelance writer. Sinead Cox is a public historian, and current Curator of Engagement and Dialogue at the Huron County Museum and Historic Gaol in Goderich. Staging our Histories was partially supported by an Active History Small Projects Grant. Click here to support Active History and our small projects and awards programs.