With rail construction largely completed and mechanization lessening the need for iterate agricultural labour, mass unemployment had become the norm in Edmonton, Alberta by 1914. At this time, Carl Berg, a former member of the Industrial Workers of the World (IWW), relocated to the city. Here he started working with Sarah Knight in the Federal Labourers Union and in the Socialist Party of Canada (SPC). Edmonton SPC member and leader of the Carpenters Union Joseph Knight worked tirelessly to promote a national general strike in the event of war. This was a hopeful but fruitless endeavour; and later Edmonton saw few strikes in the early war years.

By 1918, the labour situation had become explosive. High inflation, war profiteering, a growing cognizance of the realities of war, and intense domestic repression all merged to make Canada a particularly strike-bound place. In Edmonton, this manifested most clearly in the firefighters’ strike of 1918, which successfully demanded an inside hire for chief. Later that year, the Edmonton Trades and Labour Council (ETLC) voted to approve a general strike in support of both the postal workers and the running-trades actions in Calgary. Activists learned that even the threat of a general strike was effective.

It is important to note that the ETLC was hardly a den of radicals. But even they were dismayed by the conservatism of the mainstream labour movement. As such, the ETLC supported the organization of a regional conference in March 1919 to address the unique concerns of western workers and to plan a way forward in the postwar period.

Edmonton’s union members were well represented at the conference and were partially responsible for expanding its original and limited mandate. After calling for a turn towards revolutionary socialism, they voted to withdraw their members from international and craft unions in order to form the One Big Union (OBU). While virtually every western Canadian miner was in favour of the OBU, the rest of the labour movement was almost exactly split. Those who had voted to join the OBU nevertheless carried on, planning to organize a regional general strike for 1 June with the six-hour-day as their core demand.

Some on the ETLC perceived the OBU as an existential threat. At an April meeting, they voted 20 to 19 to expel OBU sympathizers from their ranks. Berg, the Knights, and other militants were ejected but remained in control of their unions. At the same time, red-baiting was on the rise in Edmonton. Both the labour and popular press printed anti-communist screeds, a student sympathetic to the SPC was attacked at the University of Alberta, a talk by Sarah Knight was violently broken up, a meeting of Ukrainian socialists advocating for their interned comrades was deemed treasonous, and the Royal North-West Mounted Police (RNWMP) raided and sacked the SPC headquarters. 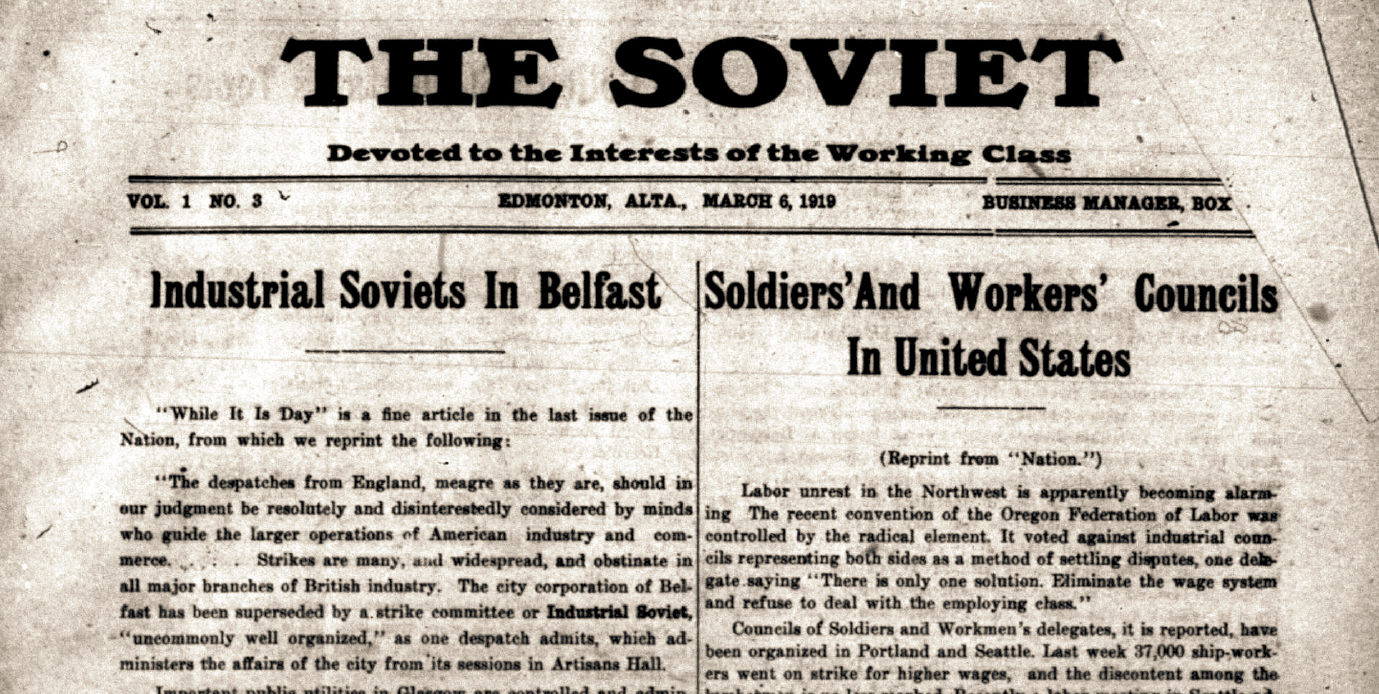 OBU plans for a western general strike were superseded by the Winnipeg General Strike. The ETLC immediately pledged their support of the Winnipeg strikers and voted to hold a city-wide labour meeting on 21 May. Worried about credibility with their membership, all expelled unions were extended invitations. Taking the floor at the Labor Hall, Berg moved that all unions hold an open vote to join the general strike. The vote was 1,676 for and 506 against. Some non-unionized workers, including Chinese launderers, joined later.

The Edmonton General Strike began on 26 May at 11:00. The strikers quickly organized sub-committees to handle urgent matters, which included everything from staying in contact with Winnipeg to propaganda and health and safety. The RNWMP mustered, accustomed their horses to the sound of gunfire, and ensured that their machine guns were in working order. Meanwhile, in a 74-4 vote, the police force declared that it was “ready to act at the call of the strike committee.” The defection of the police was a galvanizing factor in the local elite organizing a Citizens’ Committee. While they engaged in minor strikebreaking, their major role was in failing to convince the mayor to break the strike through force. The Edmonton Free Press, which was affiliated with the ETLC, advocated for its readers to return to work. Other newspapers said far worse.

The General Strike Committee controlled power and electricity, the telegraph system, and the trains. Berg, who had been elected to the executive, ensured that the theatres remained open with permission of the strike committee. Though restaurants were closed, milk remained available. City Hall, however, was shuttered. Water pressure was lowered so that only the hospital and the first story of any given building had water. By late May, the teamsters, taxi drivers, carpenters, bricklayers and masons, boilermakers, plumbers, painters, railway carmen, yardmen, freight handlers, machinists, express messengers, steam shovel operators, metal workers, rail maintenance workers, railway clerks, and blacksmiths were all still on strike. To add to the tally, nearly every miner and rail worker in the province of Alberta was out as well.

Even though 36 out of 49 unions were still officially on strike, by the middle of June there was a sense of near normalcy in Edmonton. The strike committee still met, but the influence and potential of the general strike had waned. By 28 June, all sympathetic strike action had come to an end. After Bloody Saturday in Winnipeg, on 21 June, the strike committee met only to hear reports from delegates sent to personally ascertain the situation. After learning of what had transpired in the streets of Winnipeg, the Edmonton strike was called off.

Mikhail Bjorge is an historian who teaches labour studies and history in Toronto.

Friesen, Gerald. “‘Yours in Revolt’: The Socialist Party of Canada and the Western Canadian Labour Movement.” Labour/Le Travail 1 (January 1976), 139–57.