There were three foundational texts in my early development as a historian. I would love to say one of them was E. P. Thompson’s The Making of the English Working Class. But it wasn’t. Rather, the first was Hamlyn Children’s History of the World (1969) by Plantagenet Somerset Fry (oh, that name) and the second was R.J. Unstead’s Story of Britain (1970), with beautiful illustrations by Victor Ambrus.

Amis’ novel of Jim Dixon, a disaster-prone History lecturer at a British university in the years following the Second World War, is a hilarious, rage-filled attack upon the fustiness of bourgeois, provincial England, its pretensions, its petty but stultifying class differences, its sexual unease. In later life, Amis complained to his son Martin that he couldn’t abide modern literature, swearing: “I’m never going to read another novel that doesn’t begin with the sentence, ‘A shot rang out.’.” Fittingly, perhaps, Lucky Jim was itself a shot that rang out in the early 1950s, an opening salvo of the ‘Angry Young Men’ movement that helped blow away the cobwebs of Victorian repression and deference in British society. 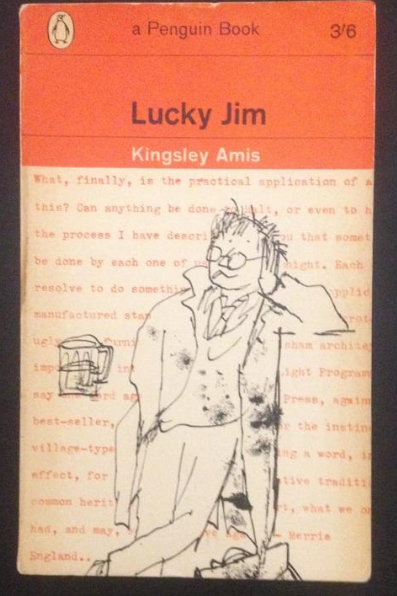 Cover for the Penguin edition of Lucky Jim, 1965.

That Amis channeled his anger at postwar Britain through the lens of a campus comedy did not blunt its edge. Forgive the self-indulgence, but I read Lucky Jim the same year I heard the Clash’s first album and, perhaps this is unlikely, but, born twenty years and genres apart, they share an energy and clarity born of anger, even if Lucky Jim has better jokes and the Clash has a better beat. The teenage punk in me that never successfully eclipsed the real-life nerd found as much delight in lines like “the conversation would have been appropriately rounded off by Welch’s death” as in the opening chords to ‘London’s Burning’. (1)

But the real poisoned, if delicious, chalice for a future academic historian was offered by the following meditation Jim Dixon offers on the title of an article he has submitted for publication: “It was a perfect title, in that it crystallized the article’s niggling mindlessness, its funeral parade of yawn-enforcing facts, the pseudo-light it threw on non-problems…The economic influence of the developments in shipbuilding techniques, 1450 to 1485”.

I read this, and I still went into history. Thanks to Lucky Jim, at least I started that journey with an ironic spring in my step.

This series of posts is about history and film. I want to talk about what the original novel and the 1957 film of Lucky Jim mean, both in terms of what they say about History and what they are as historical artefacts.

The 1957 adaptation was made by the Boulting Brothers, an important production duo in postwar British film. Many of their films shared a gentle, individualist critique of the society created in the wake of the Second World War, a new Jerusalem of comprehensive welfare provision, a state-managed and affluent economy, and a reformed education system, all of which helped smooth the edges of inequality in Britain. The Boulting Brothers’ masterpiece was I’m Alright Jack (1959), a satire of trade union power. In several of these films, Ian Carmichael (best-known to North American audiences for playing Dorothy Sayers’ interwar detective, Lord Peter Wimsey) portrayed characters at odds with society, whether represented by trade unions, the army, the church or, in the case of Lucky Jim, universities. The Boulting Brothers films are themselves an interesting collection of artefacts, showing that the new world of the welfare state and the managed economy carried within it an individualist, slightly bloody-minded rebellion, which flowered in a much more powerful and definitely less funny way with Thatcherism in the 1970s and 1980s. 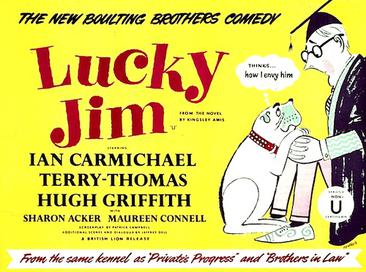 Lucky Jim is an important portrait of postwar Britain. The book is set in a provincial town and its ‘red-brick’ university– in English terms, a university that is not Oxford, Cambridge or London. This, the introductory titles to the film makes clear, is a symbol of the new Elizabethan age in the 1950s, carried along by the welfare state, a booming (and state-managed) economy, and educational reform that ushered some children from outside the upper- middle classes into colleges and universities: “Here are moulded the intellectual Drakes and Raleighs of tomorrow – fearless, independent – and state supported.”

Jim Dixon is the (beleaguered) protagonist of this new world, a lower middle-class product of wartime service and post-war education, who clings to the very bottom rung of the History profession’s ladder. He blunders through a series of academic, social and romantic disasters, fueled by drink, cigarettes and a deep loathing for the pretension, snobbery and stasis he sees around him. In the end, he gets the girl he wants and a voyage out, bound for the freedom of London. And that resolution sets out another important leitmotif of postwar British culture: the desire to slip the dour fastness of provincial Britain for the brave new world of London, a theme seen in later works such as the film Billy Liar (1963) and Margaret Drabble’s novel Jerusalem the Golden (1967). That escape forward is exactly what Jim Dixon effects in Lucky Jim, fleeing the claustrophobia of both academia and the provinces for the metropolis.

For these reasons, Lucky Jim is that most welcome of historical artefacts: it is a compelling picture of an age that makes you laugh.

The portrayal of the academic world in both the film and the novel will strike familiar tones with contemporary historians. Unlike later British campus novels by, for example, David Lodge and Malcolm Bradbury, this is not an academic world of plenty. Rather, it is one of precarity. In our terms, Dixon would be defined as an adjunct or contract faculty, employed from term to term. He is tortured both by the uncertainty of his professional future and by the certainty that that future is in the hands of the vile Professor Welch, who exploits Dixon shamelessly while shirking all responsibility for Dixon’s future. In the film, Dixon tells Welch, “If I am not going to be kept on, I’ll have to be looking for another job”, to which, in a moment of inspired obfuscation, Welch replies: “Teaching job? Quite. Let me know what you decide.”

Lucky Jim’s history is also a world where no one is immune from the powers above them, in this case, senior administrators. A single misstep – a poor open day, a badly organized commemoration lecture – can sink a department. Nor can much support be expected from those who are taught. Students are neither particularly deferential, nor particularly defiant of the faculty teaching them, as if, as indeed it is, life is elsewhere, beyond the classroom. The most profound teaching impact and appreciative student response comes when Dixon collapses, drunk on stage in the middle of a public lecture.

And Lucky Jim is a map of the personal anxieties that often attend academic life. It presents academia as a world of envy, with everyone at the provincial university painfully aware that of the two places they are not: Oxford and Cambridge. Imposter syndrome? Lucky Jim offers a wonderfully succinct definition: “One of the things [Michie] knew, or seemed to, was what scholasticism was. Dixon read, heard, and even used the word a dozen times a day without knowing, though he seemed to.” (p. 30).

But what of Lucky Jim’s History? Both book and film take an ambivalent view of its worth. I’ve already quoted Dixon’s view of his own scholarship. At best, Dixon doesn’t mind History, as an alternative to more unpleasant things: “[h]e and Welch might well be talking about history, and in the way history might be talked about in Oxford and Cambridge quadrangles. At moments like this Dixon came near to wishing that they really were.” (p. 10) At worst, he actively detests History. This ambivalence comes out most powerfully in a career-ending Götterdämmerung of a public lecture on ‘Merrie Englande’. In this, a very drunk Dixon trashes History and those who would romanticize it. The film version has him declaring that “Henry Ford was right”, history was bunk. And even if it wasn’t, “Merrie Englande never was merry…murder, poverty, starvation, ignorance, tyranny, bloodshed, the lot… face the facts.” At the end of Lucky Jim, Dixon throws off the shackles of both academia and History itself, embracing the present and the future, represented by youth, the girl he fancies, and a London of excitement and opportunity.

So, why is Lucky Jim a foundational text for me as an academic historian, who has undoubtedly done his fair share of staging a funeral parade of yawn-inducing facts? Well, perhaps not a funeral parade. Because Lucky Jim, as an historical artefact, brings to life a period of British history I love in a way that I love, with rage, insight and humour, putting its finger on the strengths and weaknesses of that particular society in that particular moment. And because, not least, as a satire, ambivalent about academic History, Lucky Jim demands that we remember that our relevance as historians is never a given, that we always need to watch out for the pseudo-light and the non-problems.