The Emperor’s Club (2002, directed by Michael Hoffman) stars Kevin Kline as a History teacher who works at a prestigious boys’ boarding school in the 1970s. Kline’s character, William Hundert, is a strict teacher of the history of the Roman Empire. He teaches a very structured class until Sedgewick Bell, a senator’s son, certified bad boy, and potential Communist joins the class. Despite a rocky beginning to their relationship, Hundert is able to inspire young Sedgewick in the run up to the prestigious “Mr. Julius Caesar Contest”. However, in the final, Hundert discovers Sedgewick is cheating and is able to eliminate him without this being discovered. Twenty-five years after this, Sedgewick, now a very wealthy businessman, organizes a rematch just to cheat again and be eliminated again in the same manner. Following this, Hundert concludes that he failed Sedgewick, as the latter uses this event to announce his candidacy for the senate and shows no remorse for cheating. Hundert then concludes that while he failed Sedgewick, he succeeded with the rest of his students. 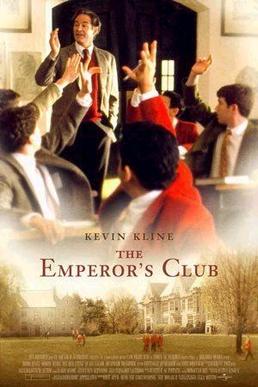 Film poster for The Emperor’s Club

As a current History student at Concordia University, I found this film truly terrible but at the same time incredibly fascinating. Unfortunately, a film from the auteur responsible for the celluloid masterpiece “Soapdish” was not able to catch lighting in a bottle one more time. However, I still found this movie to be very watchable due to interesting details that are never really investigated such as a) the senator’s son’s possible Communist beliefs (is he running for the U.S. senate as a Communist?) and b) Hundert causing the marriage break-up of a colleague and then marrying his ex.  Both of these threads are never explained.  Admittedly, either of these stories may be more fascinating than a film about what is essentially a game of Roman historical Jeopardy, but the fact that these issues are never addressed makes them all the more entrancing. At the same time, it was extremely enjoyable to see glorious clichés such as the bad boy student and the stern teacher who eventually becomes a mentor to this kid. All that was missing was the teacher turning his chair around and telling his students to throw out their textbooks and learn from the heart. Even without this, “The Emperor’s Club” was a highly flawed but completely fun film.

Although the movie contains many accurate historical facts, it seems to have no idea as to what a teacher actually does in a classroom. For starters, the film portrays Hundert in sections not only as teacher, but also headmaster, and, in one scene, dormitory monitor. This seems like unprecedented power for a single historian that I believe has only been topped by Michael Ignatieff’s time as head of the Liberal Party. However, this private school seems to be special: not only does the “Mr. Julius Caesar Contest” hold very high importance for current students and alumni, but Hundert’s class on the Roman Empire appears to be the only subject taught at the school. At no point in the film is there any indication of another class or even a scene with Hundert talking to another teacher.

This incredibly specific focus for these students does have a significant effect as the group, who in my estimation cannot be older than high school freshmen, is shown to have much better memory retention than any student I have encountered at Concordia. I recently took a third-year course covering the history from Alexander the Great to the Roman Empire, and no one in that class could come close to the factual knowledge of minor historical figures that these kids have. Even twenty-five years later, these students still are shown to have maintained a vast knowledge of this time period, while I currently have trouble recalling the courses I took in my first year of university off the top of my head.

Early on in the film, Hundert states that, “Tyranny is what we have in this classroom,” and this proves to be an accurate representation of his teaching style. His lectures mostly consist of him asking rapid-fire quiz questions to his students (who all know the answers except for Sedgewick, classic bad boy) and the small fragments of lectures from which it appears to be virtually impossible to take notes. However, these lectures later are revealed to be essentially irrelevant, as Sedgewick’s cheating shows that Hundert is teaching straight out of a textbook.

Ideologically, Hundert clearly believes in the Great Man theory of history, pointing out in his first lecture that even people of great stature can be forgotten to time due to their lack of accomplishments. He does so by citing one-time king of Elam, Shutruk Nahunte, who he deems did not achieve enough to be remembered. Hundert also very highly values the impact of history on individuals. His stated goal is to use the history in his course to shape his students into adults. Throughout the film he bristles at any mention a character makes that is even remotely anti-history. He choses to quit his job at one point due to a proposal that the school should modernize and “stop looking to the past”. Statements like this clearly anger Hundert. Unfortunately, these reactions do not always look good in hindsight, because at the end of the film it is shown that the modernization he opposed would have allowed female students and more diversity into the class. 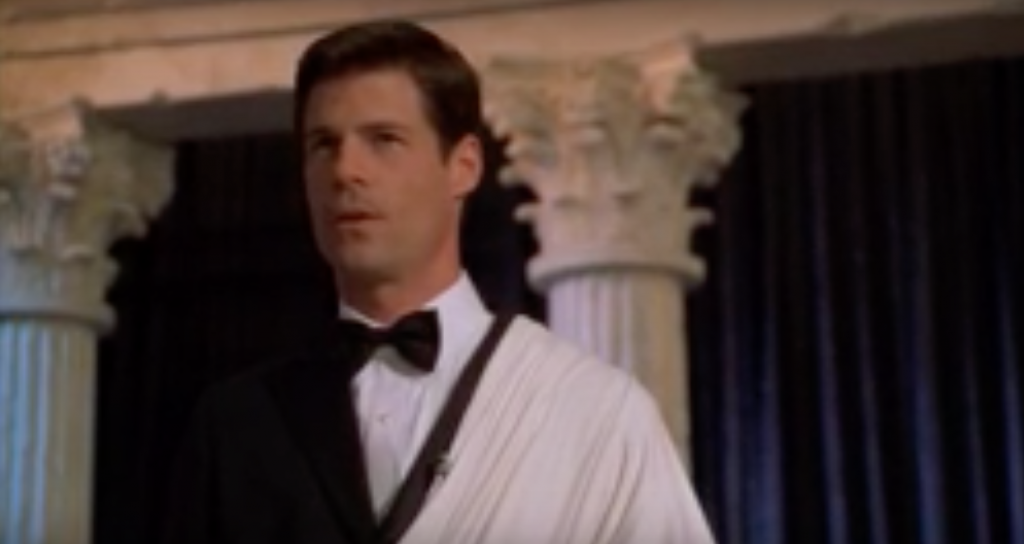 As a teacher, Hundert seems very morally driven in his statements but crosses some very key ethical boundaries. Sedgewick’s bad boy ways lead Hundert to tell him in class “stupid lasts forever,” which clearly devastates the kid. However, the biggest ethical boundary crossed is when he cheats on behalf of Sedgewick, changing his mark on his final paper from an A- to an A+, which allows him to be one of the three finalists for the “Mr. Julius Caesar Contest”. By doing this he eliminates a student named Martin Blythe, played by a young Paul Dano, to whom the contest clearly is more important. Blythe is the clichéd constantly nervous character, and the contest is shown to be an important family tradition for him. I have no idea what in young Sedgewick inspires Hundert to cross such clear ethical bounds while hurting much more likeable students in the process. Hundert will eventually regret this, but that will take place twenty-five years later. While he chastises Sedgewick for his cheating, he does not hold his own ethical errors to this high of a standard. If I were a teacher, I would be fairly impressed with the way Sedgewick cheated, which involved very carefully hidden notes and some very hammy play-acting. The moral failings of Hundert are a very intriguing part of the film but are never really resolved in any way.

“The Emperor’s Club” is an interesting portrayal of a History teacher. It includes a few very accurate moments such as Hundert struggling with technology in one scene, which has taken place in a good number of my classes in university. (It’s not your fault, History professors, going from PowerPoint to Youtube can be surprisingly tricky – and PoliSci professors have the same troubles.) However, overall I am thankful that I cannot say that this is an accurate portrayal of my experience in university or even high school History classes. That being said, this film is incredibly enjoyable to watch as a History student. For historians, I am sure, a film portraying a school which so highly values Roman history that it has eliminated all other classes would be a dream come true.

Bryn Coates-Davies is completing his B.A. in History at Concordia University.

One thought on “Historical Jeopardy: The Emperor’s Club”