In the 1966 Hollywood film, “Who’s Afraid of Virginia Woolf?”, Richard Burton plays a cantankerous, disappointed, middle-aged History professor at a small liberal arts college in New England.  “George” (Burton) has reason to be grumpy.  He feels thwarted in his career and his relationship.  He is married to “Martha” (Elizabeth Taylor), a foul-mouthed “femme fatale” who constantly argues with him and embarrasses him in public.  He does the same to her, using similar language.  While the profanities pale in comparison to dialogue on television and in film today, they were shocking in 1966.  The synopsis of the film by “Criterion on demand” is one-sentence long: “Strong language comes out of the mouth of bitter married couples.”

George is a white middle-class historian of the 1960s era.  We can tell that by his glasses, his cardigan, his groaning bookshelf, and the station wagon that he and Martha drive.  We don’t have any idea of his area of geographical or chronological specialty, but he does have an imperial sweep of historical analysis.  By that, I mean that he pronounces imperiously on the meaning of history.  He does try to write books, though strangely enough his first unpublished manuscript is a novel. Possibly it is really a thinly disguised memoir.  He writes “papers” as well.  Martha comments on this: “You’re so convoluted…  You talk like you’re writing one of your stupid papers.”  George teaches students, but since this play takes place on a weekend, they are not at issue. 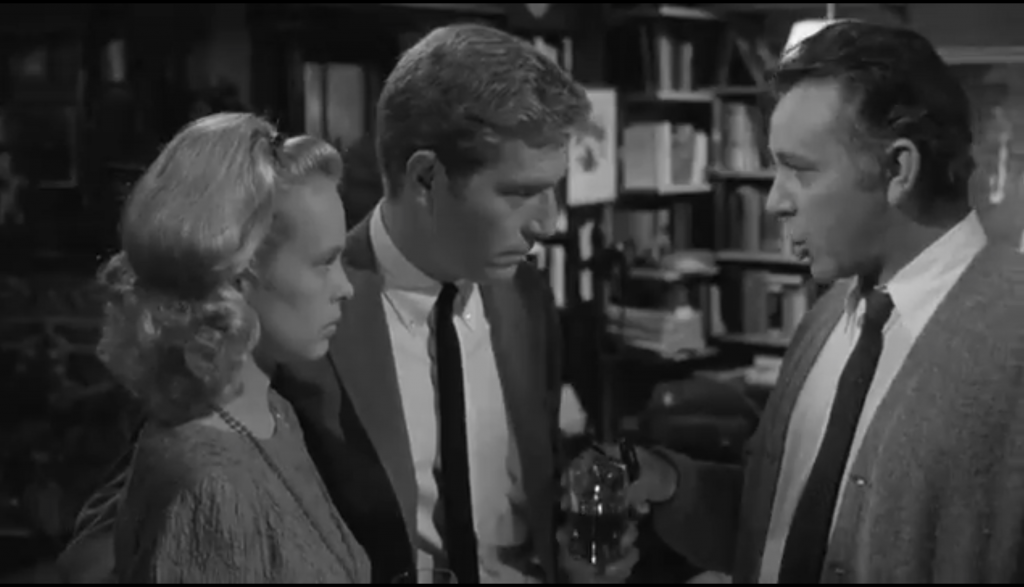 How can we tell George is an historian? Look at the cardigan and the groaning bookshelves.

Martha’s father is the college president, and she is his “right arm.”  Once his father-in-law’s protégé, George no longer can expect the administrative promotions to which he aspired.  Martha’s “failure” is different.  Despite her own college education, her disappointment relates to her ability to bear children.

The action of the film takes place in the early hours of Sunday morning.  Although it is 2.00 am, George has no reason to be tired, Martha taunts him, because he has not been in the classroom that day.  The film begins just as George and Martha return late from a well-lubricated party at the college president’s house (one of her father’s “orgies”).  It is autumn, and the leaves are on the ground.  This sociability is a big part of life for professors who appear to live on campus.  George and Martha have just met a newly hired Biology professor (“Nick”) and his wife (“Honey”), whom Martha has invited back for yet more sustained drinking at their place.  As the alcohol flows – or perhaps “gushes” is the more appropriate word – the social inhibitions drop away, and the language and the narratives become stronger and more vituperative.

This film may not capture much else about what historians do, but it does hint at one part of academic life that does not usually get much coverage:  administration.  George had hoped to make it big at the small college, moving into the position of departmental head, and then eventually university president, once his father-in-law vacated the position.  But he didn’t even make it to become head of his department.  When George declares, “I am preoccupied with History.”, Martha responds:

The story revolves around some of the distinctions between “story” and “history”.  George is a story-teller, with a fairly lax attitude to empirical truth.  George and Martha are constantly at loggerheads, as each has apparently failed to achieve their gendered markers for success. 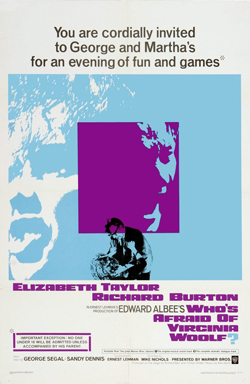 Playwright Edward Albee determined that George should be an historian, and the film invokes the discipline and an over-arching understanding of “history” a number of times in the film.  In creating the main set, the designers placed books everywhere through the living room and in the bedroom, so this does indeed look like a historian’s house – at least, it looks nearly as cluttered as my office.  George’s identity as an historian comes up time and again in the play, and his discipline is juxtaposed against the biologist’s:

George and Nick battle over their understandings of their respective disciplines.  In a veiled reference to eugenics, George evokes the inhumanity of people.

George: “Cultures and races will vanish.”

Nick: “You don’t know much about Science, do you?

George: “I know something about History.  I know when I’m being threatened.”

Shot in stark black and white at a time when this was becoming more and more rare, the film translated the hit Broadway show written by emerging playwright Edward Albee to the big screen.  “Who’s Afraid of Virginia Woolf?” was Albee’s first major hit, though it was not his favourite play.  I would agree with him on that.  As much as the film represents a tour-de-force of acting, this is, to me, a profoundly disturbing film.  The display of vocal dysfunction and the anti-female narrative are, to me at least, disconcerting.  But in 1966 this film was a hit.  And it has been judged a classic:  In 2013, the Library of Congress added the film to its National Film Registry, alongside “Mary Poppins”, “Pulp Fiction”, and “Roger and Me.”

The audacity of its foul language attracted much attention at the time – though it would not today.  To my mind, the two female parts are more compelling, though also more problematic, than the male leads.  Betty Freidan’s The Feminine Mystique appeared in 1963, and perhaps the female actors’ performances captured some of the same complexities of women’s lives that Friedan had described.  The four actors all garnered Oscar nominations, with Taylor and Sandy Dennis winning in the leading and supporting female actor categories.

Ultimately, the narrative hinges on the relation between reality and unreality.  One might expect that the historian should focus on empirical facts as well as interpretation, but George participates in the great lie that occupies the strange, central point in the story-line.  And once the agreement to maintain the great lie is shattered, after prodigious amounts of alcohol and excessive anger, the film declines to an unhappy and bitter end.

There is no virtue in being a historian in this film, and it did not likely attract anyone to the profession – although through the general expansion of university positions in North America through the late 1960s and early 1970s, it clearly did not stop anyone either.  At the end of the day, George is an historian trapped in a dead-end job, stuck as an Associate Professor, his aspirations for literary fame and hierarchical advancement within his institution stymied by alcoholism, self-doubt, and depression.  Budding academic historians at the time must have asked themselves, “Who’s afraid of Edward Albee?”

Colin Coates is a middle-aged historian at a small, liberal arts college in Toronto.  He refuses to wear cardigans.

2 thoughts on “Who’s Afraid of Being an Historian?”