As director of the French Institute at Assumption College, a research center focused on French-Canadian migration to New England, I have worked with three donors of family archival collections, not just to give their materials a good home, but to use them to shape their family stories for different audiences. This experience both convinced me of the usefulness and significance of family history and gave me the confidence to explore my own family’s history when the opportunity arose to engage with a novel written by a relative of my grandfather.

The French Institute’s archival holdings include collections related to three families that immigrated to New England from Quebec during the period of mass migration in the late 19th and early 20th centuries. The Jobin Family Archive concerns a middle-class couple, Joseph and Marie Flore Lapointe Jobin, who moved from Quebec City to Boston with their nine children in 1890. 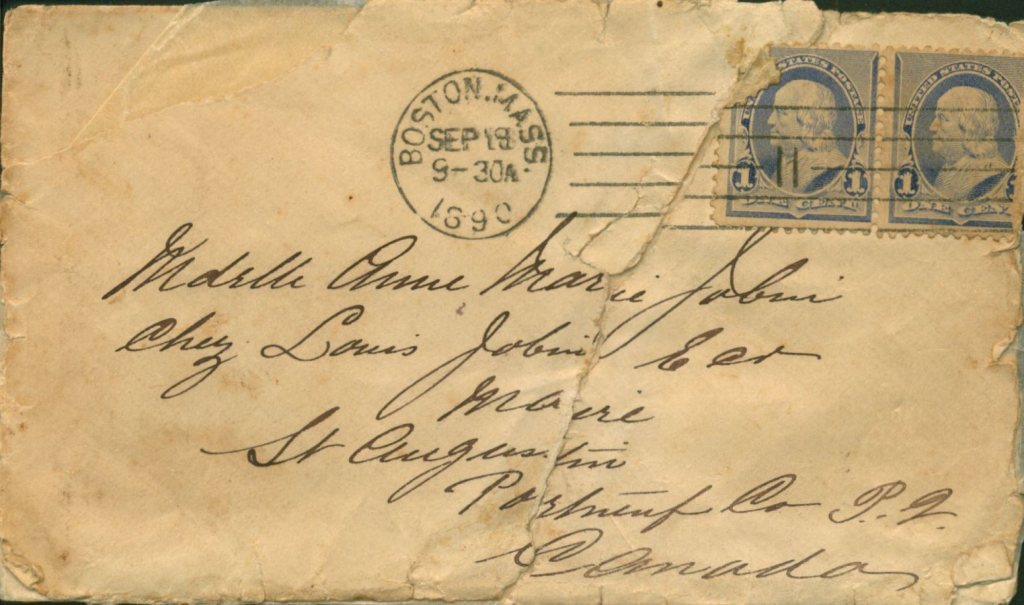 The collection includes several hundred letters exchanged between American and Canadian family members over many decades as well as a memoir by one of the immigrant children, Marie Eugenie Jobin. The donor, Rev. Philippe Thibodeau, is a grandchild of the oldest son, Theodore Jobin. Father Phil translated family documents and wrote an impressionistic family history for his American nieces and nephews, who never learned French. It is an important narrative as a guide to the collection, but also for anyone wishing to use it for scholarly research. Father Phil never tries to sugar coat his family’s experience. For instance, despite being a Catholic priest, he writes candidly about his beloved Uncle Antoine’s lifelong loss of faith while touring the battlefields of World War I as an interpreter for U.S. General Stanley Ford.

The Hus-Lemoine Family Archive is very different, consisting of papers preserved throughout the 19thcentury by a mostly illiterate rural family on their Quebec homestead. In a homemade box lined with hand-woven linen, receipts for small sums piled up next to property deeds and marriage contracts, as though all papers had equal talismanic value. Alma Lemoine Saunier remembered the aura surrounding “the box” from childhood visits to the farm, which her father had left for New England as a 14-year-old in 1901. Alma inherited the box when the farm was sold but struggled to translate its contents for her English-speaking children. Her daughter Anne Lavallée donated the papers to the French Institute in hopes that the processed archive would provide her with a better understanding of their historical context.

The third family, from the rural market town of Saint-Ours, fell between the other two socio-economically. Although the Harpin Sansoucy Family Archive features dozens of letters, Napoleon Sansoucy and his wife Corinne Harpin used a scribe to write theirs, after settling in Southbridge, Massachusetts with nine of their eleven children in 1909. (Two daughters joined them later.) 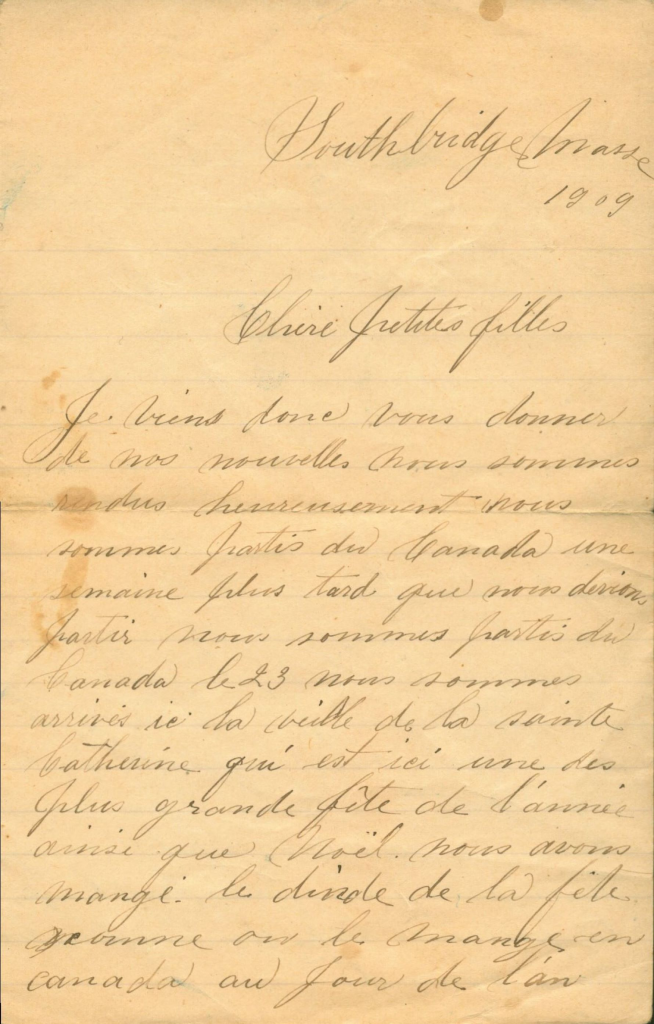 Jacqueline Lessard Finn, a retired educator and the daughter of one of the children, donated the archive while writing a well-researched family history, From Habitants to Immigrants, published in 2017.

Working with these archives and their donors convinced me of two things. First, family history is important because it allows us to engage with major themes, like immigration, on a personal level. Second, people like Father Phil and Jacquie Finn who write the history of their own families face the same issues of objectivity as other historians, no more, no less. Is the struggle to write honestly about one’s relatives really any different from that of a woman writing women’s history? Or a Canadian writing Canadian history? Without a personal stake in our research, would we undertake it in the first place?

Due to these insights, I did not hesitate when presented with a chance to work on my own family’s history. I learned in childhood that my grandfather’s “cousin” Joseph Choquet had written a novel called Under Canadian Skies,but I had never read it until it arrived at the French Institute in a box of donations. 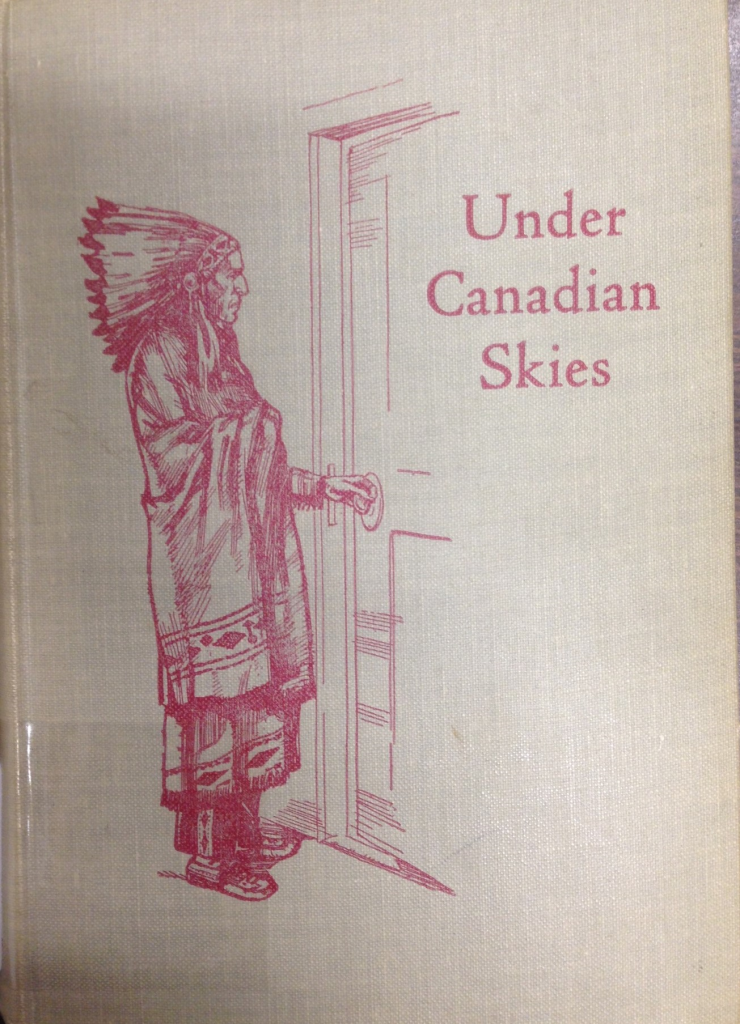 It turned out to be a historical novel about the Quebec Rebellion of 1837, published in Rhode Island in 1922. Through research, I was able to reconstruct the author’s family, literate immigrants who came to the States from Montreal around 1882. The upshot was an article examining the novel through the lens of Franco-American ethnic advocacy between the wars, comparing Choquet’s version of the rebellion to Canadian and French literary treatments. Coincidentally, the Canadian novel I used as a counterpoint to Under Canadian Skies was also written by a relative: Les Ribaud: une idylle de 37 (Montreal, 1898), by Dr. Ernest Choquette (1862-1941), whose family I likewise researched.

The experience of writing about Under Canadian Skies confirmed my belief that research on one’s own family is no different from other kinds of historical research. Yet family history has the advantage, for both writer and reader, of facilitating a personal connection to the issues at hand. Both of these points are evident in an excellent new monograph on French-Canadian immigration to New England, David Vermette’s A Distinct Alien Race: The Untold Story of Franco-Americans, which I recently reviewed in the new Franco-American e-journal, Résonance (https://digitalcommons.library.umaine.edu/resonance/).

Vermette anchors his synthetic narrative in a case study of his own family, immigrants to Brunswick, Maine in the 1870s and 1880s. His family research is just one part, albeit a particularly engaging one, of the larger research project. In his introduction, Vermette explains, “Moving from general trends to a particular instance exposes the humanity within the events. My focus shifts from the general to the particular; from the macro to the micro; from regional history to families and individuals” (p. 17). Exposing the humanity within the events. What better goal for a historian, family or otherwise?

Leslie Choquette is Professor of History, Côté Professor of French Studies, and Director of the French Institute at Assumption College in Worcester, Massachusetts. A social historian of France and French North America, she is the author of Frenchmen into Peasants: Modernity and Tradition in the Peopling of French Canada (Harvard University Press, 1997).