In 2005, Canada became the fourth country in the world to legalize same-sex marriage. During the House of Commons’ debates on Bill C-38, an act respecting certain aspects of legal capacity for marriage for civil purposes, parliamentarians on both sides argued that what they were contemplating doing was unprecedented; whether a brave or a reckless act, it was historically significant. Fourteen years later, the extension of marriage rights to same-sex couples is no longer a contentious issue for most Canadians. This was not, however, always the case.

(Mis)conceptions of history were mobilized during these debates to argue both for and against the bill, and parliamentarians positioned themselves as historical actors in unique ways. These misconceptions are evident not only in what politicians said, but also in what was not said. There was history left out of this debate, whether through ignorance, neglect, or rhetorical strategy. In this morning’s post, I analyze the ways parliamentarians mobilized different conceptions of history in their debates about how marriage should be defined and legislated. In this afternoon’s post, I will elaborate on the neglected history of queer parenting that should have informed this debate more often.

On one side of the debate, the Bloc Québécois, New Democratic Party (NDP), and some Liberal politicians argued that federally recognizing same-sex marriage was a necessary and moral step in the evolutionary progress of society; for them, it was a logical extension of human rights’ protections. Prior to the first reading of Bill C-38, same-sex marriage had already been legalized in seven provinces and one territory.[1] These provincial courts ruled that excluding gay and lesbian couples from the rights and responsibilities of marriage was unconstitutional.

The Supreme Court of Canada, however, explicitly refused to rule on this question when the Liberal government referred a draft of Bill C-38 to the court. This led to a situation where provincial courts and some Federal politicians argued that same-sex marriage was a human rights’ issue, while others supported their own rejection of such a stance by pointing to the lack of response from the Supreme Court of Canada. Additionally, as Conservative politicians were quick to point out, the international community had not declared same-sex marriage a human right. For example, Conservative MP Jason Kenney worried about this “radical social experiment” that went “against the consensus of the family of nations.” And, at the same time, Liberals like the Honourable Andrew Telegdi attempted to leverage the lack of international support as a sign of Canada’s progressiveness. To him, the country was positioned as an international leader in what was seen to be a historically significant national moment.

During the second reading of Bill C-38, the Right Honourable Paul Martin described the Canadian nation-state as a protector of human rights. In his selective rendering of Canadian history, our “inviolable commitment to equality and minority rights … makes us proud that we are where our world is going, not where it’s been.” On one side were those who believed that the Bill jeopardized Canada’s future. On the other were those, like Martin, who saw Canada as ideally placed to show the world what the future could look like.

Those who opposed the government’s so-called “radical social experiment” defended their position by summoning the whole of human history. Many politicians who voted against the Bill defined “traditional” marriage as an ahistorical, unchanging, and foundational social institution. In this view, the Liberal government at the time was gambling with the nation’s future—with its very survival. The fears that Opposition politicians raised were linked to the idea that marriage “since time immemorial” had always been “the union of one man and one woman to the exclusion of all others.”

While this ignores the diversity of historical and cultural alternatives, it was a familiar and well-used argument by 2005. For example, Conservative politicians—including Andrew Scheer—repeatedly invoked Justice Gérard La Forest’s statement in Egan v. Canada. In this 1995 case, Jim Egan and Jack Nesbitt argued for the right to receive old-age spousal allowance as common-law partners. “Marriage,” La Forest claimed, “has from time immemorial been firmly grounded in our legal tradition, one that is itself a reflection of long-standing philosophical and religious traditions.” La Forest’s verdict and the 2005 debate were both saturated by the idea that marriage, or at least the heterosexual prerequisite to marriage, was of such long standing as to essentially be considered outside the laws of historic change. Politicians (and petitioners) invoked the “traditional, historic definition of marriage,” or “the historical, ages-old, traditional definition;” others explained that such “marriage and the family … is the basic foundation of all human societies.” 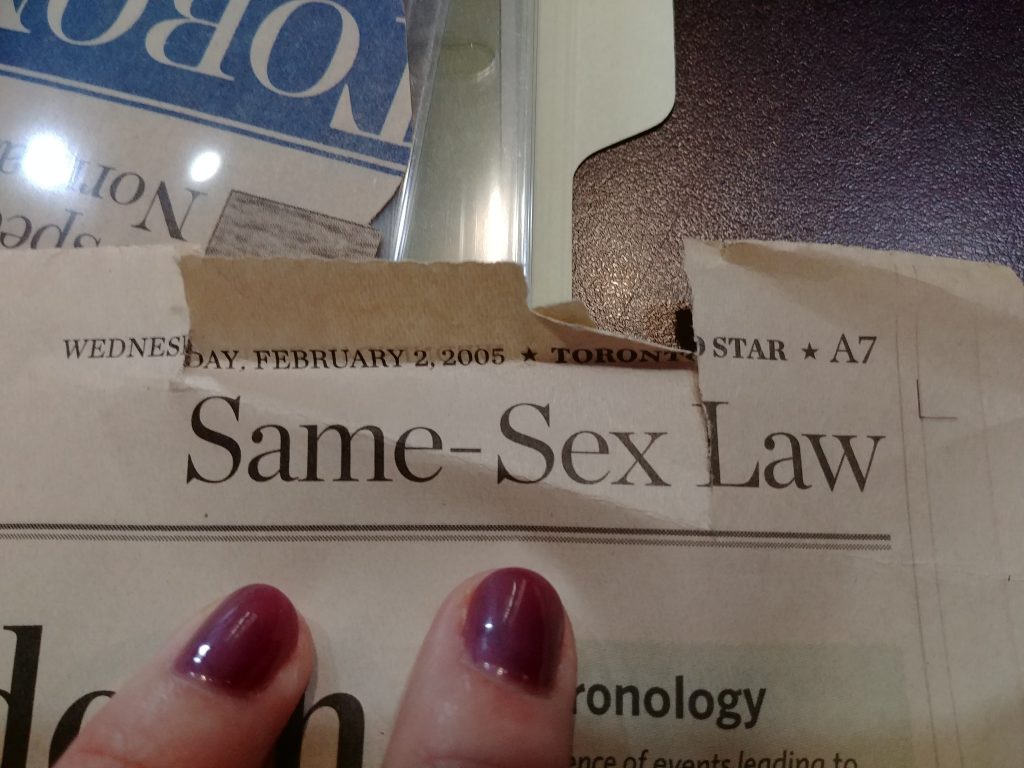 Historians like Elizabeth Abbott in A History of Marriage and Stephanie Coontz in Marriage, a History: How Love Conquered Marriage explicitly push back against the idea that marriage is outside of history. As Mary Jo Maynes and Ann Waltner bluntly state in the preface to their book, The Family: A World History: “The family is a historical institution, not a natural one.”[2] The idea, however, that marriage—and, thus, the family—always existed in a naturally heterosexual form (prior to the intervention of the Canadian courts and Parliament that is) nevertheless seemed common-sensical.

Intimately connected to the idea that traditional marriage has always been defined heterosexually is the idea that marriage remained unchanging because, above and beyond its role as a social institution, it was the manifestation of a biological reality. Once again citing Justice La Forest, Scheer, among others, argued “that heterosexual couples have the unique ability to procreate, that most children are the product of these relationships, and that they are generally cared for and nurtured by those who live in that relationship.” Continuing with this argument, and in his own words, Scheer stated:

There is nothing more important to society than the raising of children, for its very survival requires it. Homosexual unions are by nature contradictory to this. There is not complementarity of the sexes. Two members of the same sex may use their God-given free will to engage in acts, to cohabit and to own property together. They may commit themselves to monogamy. They may pledge to remain in a loving relationship for life. In that sense they have many of the collateral features of marriage, but they do not have its inherent feature, as they cannot commit to the natural procreation of children. They cannot therefore be married.

In other words, without heterosexual reproduction, the nation would literally cease to exist. Sometimes explicitly and sometimes implicitly, other politicians questioned how children in non-heteronormative households would be raised. Would same-sex marriages provide the type of stable environment for the raising of children that it was assumed, realistically or not, heterosexual marriages already provided? A non-existent, symbolic child is at the centre of this debate—a child whose interest, or so the argument went, is best served by being raised by married, heterosexual parents.

Similar arguments were seen in discussions happening outside of Parliament. Journalist David Graham, for example, traveled across Canada to interview everyday Canadians during these debates. In his resulting June 12, 2005 Toronto Star cover story, one Yukon resident explained that the Territory, “with its sparse population, depends on procreation for its survival.” According to this logic, such survival was jeopardized by the supposed infertility and childlessness of same-sex couples. More drastically, a resident from Red Deer, Alberta said: “If I had livestock that didn’t breed, I would have to destroy it.” Veiled in biological reasoning, conservative commentators argued that, because marriage is about procreation and procreation is uniquely heterosexual, marriage can only be heterosexual.[3]

These portions of the general public and parliamentarians, with few striking exceptions such as NDP MP Bill Siksay, were blatantly labouring under an important historical fallacy that queer families with minor children did not and, in fact, had never existed. As Conservative MP Garry Breitkreuz clearly stated, “We do not know the consequences and the impact this will have on our children.” In this statement, Breitkreuz either did not realize that some of “our” Canadian children were in fact raised by same-sex couples who remained unmarried—some by choice and some because they had no choice. Or, he did not count these children amongst “our” children.

What does it mean for people when we ignore their history and invalidate their existence? What did it mean for the children of same-sex parents, like me, who watched these debates unfold? We were being told simultaneously that we, as a Canadian Nation, were on the cusp of history while our own family histories were illegitimate and unworthy of inclusion within the larger national narrative. What does it mean for me, as a historian, that the negation of the history of queer parenting is so deeply embedded in our political and social imaginaries? And, finally, as we approach a Federal election, what does it mean for me, individually, that Andrew Scheer, who once argued that my Dads’ relationship is “by nature contradictory” to “the raising of children,” and who has doggedly refused to attend Pride celebrations, is campaigning to be our next Prime Minister?

Note: The quotation in the title of this piece was said by Paul Martin in the House of Commons on February 16, 2005.