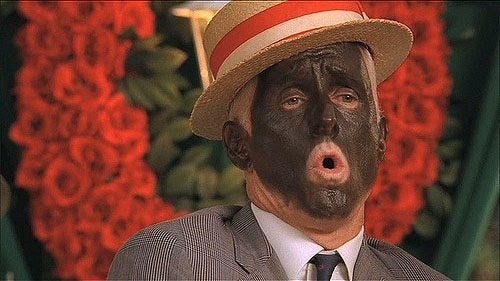 Still image from a 2013 scene from Mad Men, in which Roger Sterling (John Slattery) wears blackface.

Years ago, my former Banting-postdoctoral supervisor Stephen Johnson, Professor Emeritus at the Centre for Theatre, Drama and Performance Studies at the University of Toronto was to appear on a radio talk show to explore the question, “Why has there been a resurgence in the use of blackface in contemporary society?” The interview never took place because seemingly more newsworthy events took precedence at the time.

Now that I’ve taken up the mantle of doing this work, and reflecting on conversations I’ve had with Stephen about such questions, the reality is, blackface has never gone away.

Films like Tropic Thunder (2008), starring Robert Downey Jr. in blackface as Kirk Lazarus, to a 2013 scene from Mad Men (set in the 1960s), in which Roger Sterling (John Slattery) wears blackface to serenade his fiancée with My Old Kentucky Home (a minstrel song written by Stephen Foster in 1853) at a public gathering. It is always there. And Canadians have never stopped consuming its imagery.

Then, last month, in response to Canadian Lilly Singh’s late-night talk show, writer McKensie Mack told Teen Vogue that the ways in which Singh, as a brown woman, performs Blackness is akin to a minstrel show. “It’s the blackface without the actual painting of the face,” McKensie said, adding, “Black culture is many things, but one thing it’s not is a joke.”

These examples are not from one hundred years ago. They point to the persistence of blackface in the contemporary, and help to contextualize Justin Trudeau’s brownface, a variation on blackface, performed at an Arabian Nights’ themed party in 2001, and the subsequent photographs of him in blackface.

Blackface began as a form of theatrical performance in New York, Boston, and Philadelphia in the 1830s and 1840s. By the 1850s, professional American blackface minstrel acts (i.e. the blackface minstrel show is invented by a troupe known as “The Virginia Minstrels”) performed on stages in western, central, and eastern Canada. During the same decade, Canada produced its own minstrel performers, such as Colin “Cool” Burgess, who was born in Toronto in 1840 (the same year Toronto’s Black community first petitioned against Black minstrel characters on stage and in circuses).

At its core, the minstrel show was about maintaining both a real and imagined line between who belonged and did not belong.

In the Canadian national discourse, we have never engaged in a collective conversation about blackface. When we are urged to move on, or to focus on “real issues,” especially with the federal election less than a month away, we are actually saying that anti-Blackness and the disregard for Black life is not an issue.

The most enduring legacy of the minstrel show is white nostalgia for a (simpler) past on one hand and the denial of a dignified Black life in that romanticized past.

For instance, by the 1890s, the minstrel show format was no longer popular. Instead, during this decade – and until around the 1960s – minstrel acts, typically part of vaudeville variety shows and later Hollywood films, caricatured Black men and women as being nostalgic for a past of servitude. In other words, Black people were depicted as contented buffoons, lazy, and most importantly, happy in their subordination. This narrative formed the template for the first North American sensation of the twentieth century – Amos ‘n’ Andy– which started as a radio show before it made its way onto television in the 1950s.

On Amos ‘n’ Andy, white actors in blackface, Freeman Gosden and Charles Correll, caricatured two Black men. Where Amos (Gosden) was naive, easily fooled but honest (to a fault) and hardworking, Andy (Correll) was lazy though good-natured about it. This show reproduced tropes of Black masculinity that continue to appear in popular culture. While Amos and Andy were portrayed by African American actors when it was adapted to television in the 1950s, as television scholar Herman Gray once observed, “the social and cultural rules of race relations between Blacks and whites were explicit: Black otherness was required for white subjectivity.”

Karen Cox, a scholar of US Southern history, observes that Amos ‘n’ Andy  had an estimated 40 million listeners – 53 percent of the radio audience – at its peak in the 1920s and 1930s; by the 1940s, the show had inspired numerous other minstrel acts on radio, and the medium kept blackface performers employed well into the 1940s, to the enjoyment of audiences in every region of the US.

In Canada, white Canadian audiences also consumed Amos ‘n’ Andy because they offered images of Black people that reinforced beliefs of what Black people were like and how their presence should be received. Black people did not belong to the national identity, but Black caricature did.

While I’ve become an expert in this topic, there are theatre, film studies, and Canadian studies programs across the country that virtually ignore this subject. For example, I once taught a third-year Black Canadian Studies course at the University of Toronto, and students would often ask why they had never heard about histories of Canadian slavery, blackface, or anti-Black racism in their education up to that point. As educators we decide what we think is important and in far too many schools across this country, Black history and anti-Black racism just aren’t seen as important. Thus, the fact that our media and for the most part the electorate have moved on from Trudeau’s actions is emblematic of this erasure.

History and context matters. The photos of our prime minister might be dismissed as “past mistakes” but if blackface has been consistent in our country since the 1850s, Trudeau’s blackface stands as a shining example of our culture of forgetting and nostalgia for a past that absolves white Canadians of anti-Black racisms and acts of exclusion. This deliberate erasure is obvious in Canadian academia as well, and works to explain why it took a great deal of advocacy on the part of Black scholars and activists for the Federation for the Humanities and Social Sciences to recognize the great harm done to Nova Scotian student Shelby McPhee when he was racially profiled at the UBC meeting in June 2019. That the theme for next year’s meeting is now Bridging Divides: Confronting Colonialism and Anti-Black Racism recognizes the urgent need to foreground conversations and knowledge about this subject in Canada.

Canadians have to do better. How can we combat racism when so many people continue to plead ignorant to what it is? Anyone studying and researching Canadian history must begin to question assumed knowledges, and most of all, acknowledge that blackface is not an accidental part our cultural fabric but inseparable from it.

Cheryl Thompson is an Assistant Professor in the School of Creative Industries at Ryerson University. She is author of Beauty in a Box: Detangling the Roots of Canada’s Black Beauty Culture(Wilfrid Laurier Press, 2019). Her next book, Uncle: Race, Nostalgia, and the Politics of Loyalty, will be published with Coach House Books in 2020.