Every 11 November, Canadians gather to remember those who served their country in times of war and conflict. But are these same Canadians also gathering to forget? Memory, especially collective memory, tends to be selective.

One particularly interesting case study of collective memory (and collective forgetting) is the Northwest Resistance of 1885. The conflict saw some 5,000 Canadian soldiers march into what is now Alberta and Saskatchewan to battle several hundred Métis and First Nations opponents. After three months of sporadic fighting, the Resistance ended. Its leaders were imprisoned and put on trial by the Canadian government.[1]

Nowadays, few Canadians pause to remember the soldiers who fought in 1885. But this was not always the case.

For many years, the Canadian militia veterans of 1885 were celebrated as glorious heroes who had saved the country. They portrayed a masculine ideal and were proof that Canada could carry its weight as part of the British Empire. In the immediate aftermath of the conflict, monuments were erected in English-Canadian towns across the Dominion to both celebrate their victory and to mourn those militia members who had lost their lives. Between 1886 and 1896, memorials dedicated to the militia were unveiled in Winnipeg and Russell in Manitoba as well as Ottawa, St Catharines, Port Hope, Peterborough, and Toronto in Ontario. Most unveiling ceremonies were attended by thousands of citizens, including Canada’s political and economic elite.[2]

This commemoration did not stop at statues. More than 5,000 Medals—the first-ever to be awarded by Canada for military service—were given to militia who had participated in the campaign. In May 1886, over 10,000 people are reported to have filled Queen’s Park in Toronto to see 500 veterans receive their decorations. One Toronto newspaper declared that Canada had “electrified the civilized world” with “the pluck and bravery of her citizen soldier in meeting and crushing red-handed rebellion.”[3] 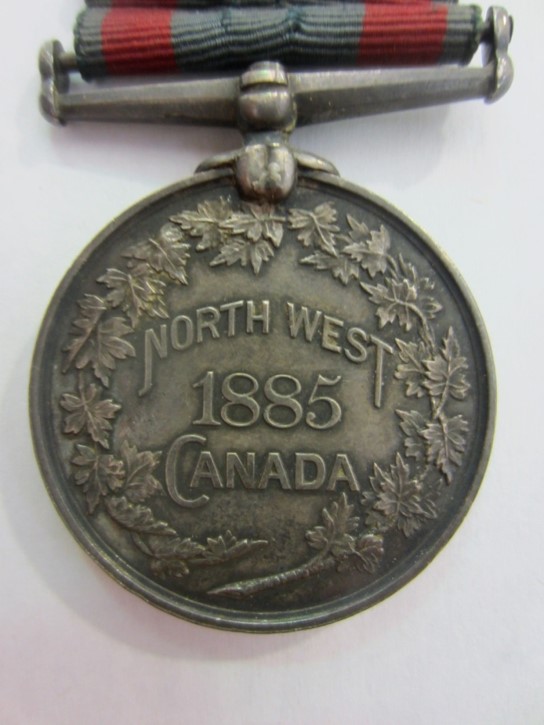 For those defeated in 1885, though, it was a very different story. Many who supported the Resistance, or had just been in the wrong place at the wrong time, found they were homeless or imprisoned. There was neither time nor resources available for Indigenous peoples to immediately create large monuments.

The community of Batoche had been the headquarters of the Métis Resistance. Eventually, it became the focus of those who wished to commemorate the Métis cause. First, a mass grave was erected for nine Métis soldiers killed at the Battle of Batoche. It is uncertain exactly when it was erected, but it was before the year 1900. It featured a series of wooden crosses enclosed by a fence. Then, in 1901, the community erected a stone monument in the cemetery to commemorate all those who had died fighting for the Métis cause in 1885.[4] 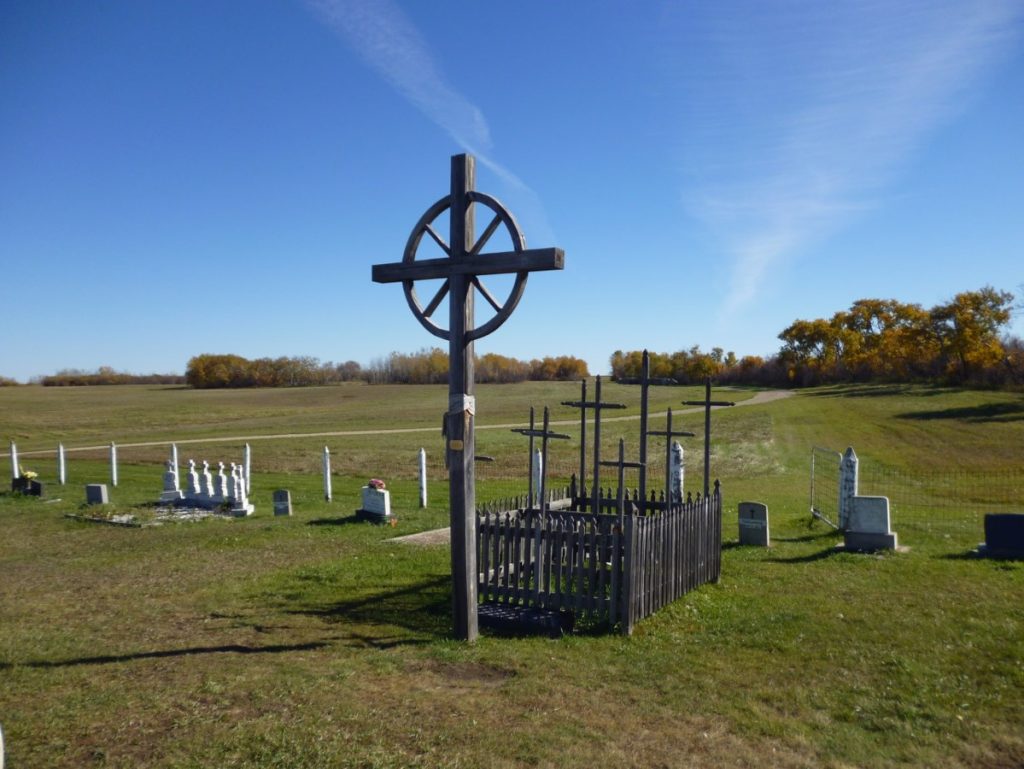 Mass Grave at Batoche. Photo by the author.

There were initially no Indigenous monuments outside Batoche, but the Indigenous memory of 1885 was kept alive through oral traditions in Métis and First Nations communities elsewhere. And when English Canada tried to impose its own narrative in the heartlands of these memory communities, conflicts arose.

In 1925, the federal government tried to build its own monument at Batoche. While the text on the stone cairn claimed to be neutral, it focused on Canadian military achievements and referred to the Métis and their allies as “rebels.”

Métis organizations, as well as the Catholic Church, complained about the use of the word “rebels.” In November of 1929, the RCMP discovered that the federal Batoche monument had been defaced, with letters hammered off of the inscription.[5]

The Indigenous narrative had not won ascendancy. English Canada continued to be pro-militia well into the 1930s and 40s. But, as the last militia veterans passed away, their narrative began to lose some of its strength. By the 1950s, the Canadian government was beginning to make allowances for Indigenous narratives of 1885—at least in the heartland of the conflict.

In 1952, a new plaque commemorating the Battle of Cut Knife Hill was unveiled by Canada’s Governor General. This unveiling was not managed by the federal government, but by the chiefs of several First Nations reserves. On the cover of the program was a picture of the warrior Fine Day, who had led the First Nations forces in the battle.[6]

In 1962, the Winnipeg Volunteer’s Monument was removed from its prominent location in front of Winnipeg’s old City Hall. In 1968, it was moved again. Sandwiched between two large buildings, it was no longer a dominant part of the streetscape. A letter to the editor even questioned whether the statue should remain at all, stating that it celebrated a violent and colonial chapter in Canadian history.[7] 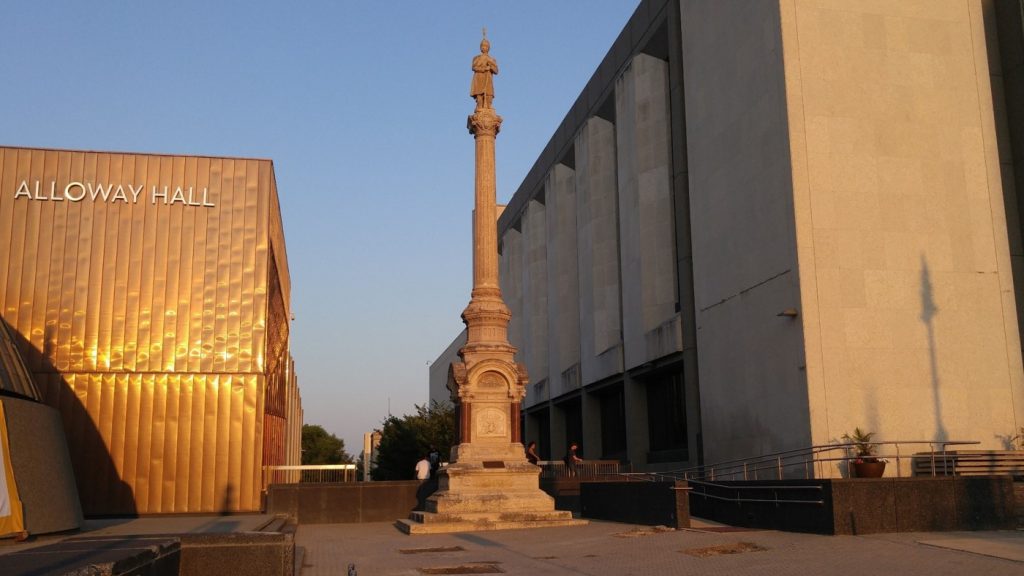 The Winnipeg Volunteers’ Monument. Photo by the author.

The eclipse of the 1885 militia narrative was almost complete. When the CBC made a big-budget film about 1885 in 1979, the Métis were now heroes. Although the film did not portray the Canadian militia as villains, they were no longer the stars of the show.[8]

In more recent years, monuments to the Canadian militia veterans of 1885 lie crumbling and forgotten. In 2009, the city of St. Catharines considered destroying an 1885 monument because it “could be perceived as a symbol of animosity towards past First Nations of Canada.”[9]

In Toronto’s Queens Park, the Métis National Council actually commemorated Riel Day in 2011 by gathering in front of the 1885 soldiers’ memorial to lay a wreath in memory of Louis Riel—something the builders of this monument would have never expected to see.[10]

Despite this shift, Indigenous veterans have not replaced the Canadian militia veterans as heroes in English Canada. Riel and other major leaders continue to loom large, but the Indigenous rank and file remains largely unknown outside of their home communities. And, although the narratives of both veteran communities have become obscured by the shifting mists of memory, they have not disappeared completely.

In July 2010, the Métis and Canadian governments installed three large stone blocks as part of a gate at Batoche cemetery. The same text was written on each stone in French, Michif, and English:

In spirit we reconcile
on this day of July 18, 2010
As we honour those who lost
their lives in the 1885 North West Resistance
We the Metis, died for
Our home and our land
We, the soldiers
Died for Canada
We, the First Nations
Died for our Metis brothers and sisters
We are now forever free.[11] 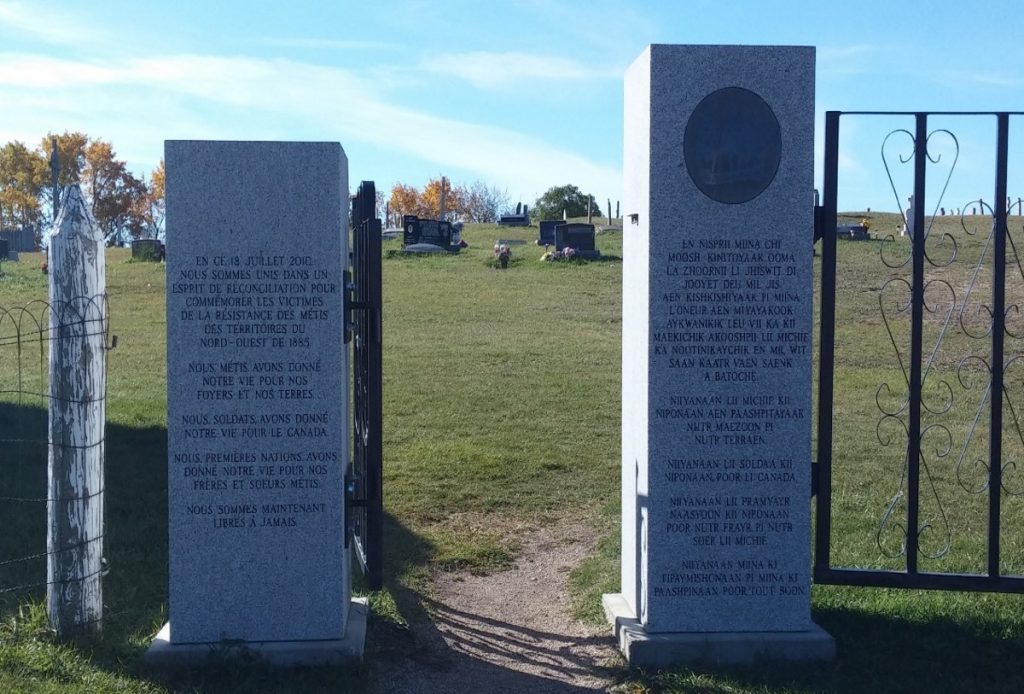 Two of the three stone gates at Batoche cemetery. Photo by the author.

More than 125 years after the 1885 conflict, some sort synthesis had been achieved. This is not to say that reconciliation between these conflicting narratives has been achieved, or that there are still not more surprises to come. Given the contested nature of the past in Canada, it’s difficult, if not impossible, to say how these veterans will be remembered ten or a hundred years from now.

But the story of the veterans of 1885 shows how various memory communities attempted to weave narratives that were supported by and supportive of particular local and national identities. While those narratives proved to be very durable within their own communities, their popularity in wider Canadian society has changed over time. On Remembrance Day, the 1885 veterans are a timely reminder that monuments might be written in stone, but memory is far more malleable.

[1] Many historians have written accounts of the Resistance, as well as its lead-up and aftermath. For a short synopsis, see Bob Beal and Rod Macleod, “North-West Rebellion,” in The Canadian Encyclopedia, Historica Canada, Article published February 07, 2006; Last Edited February 22, 2019. https://www.thecanadianencyclopedia.ca/en/article/north-west-rebellion.