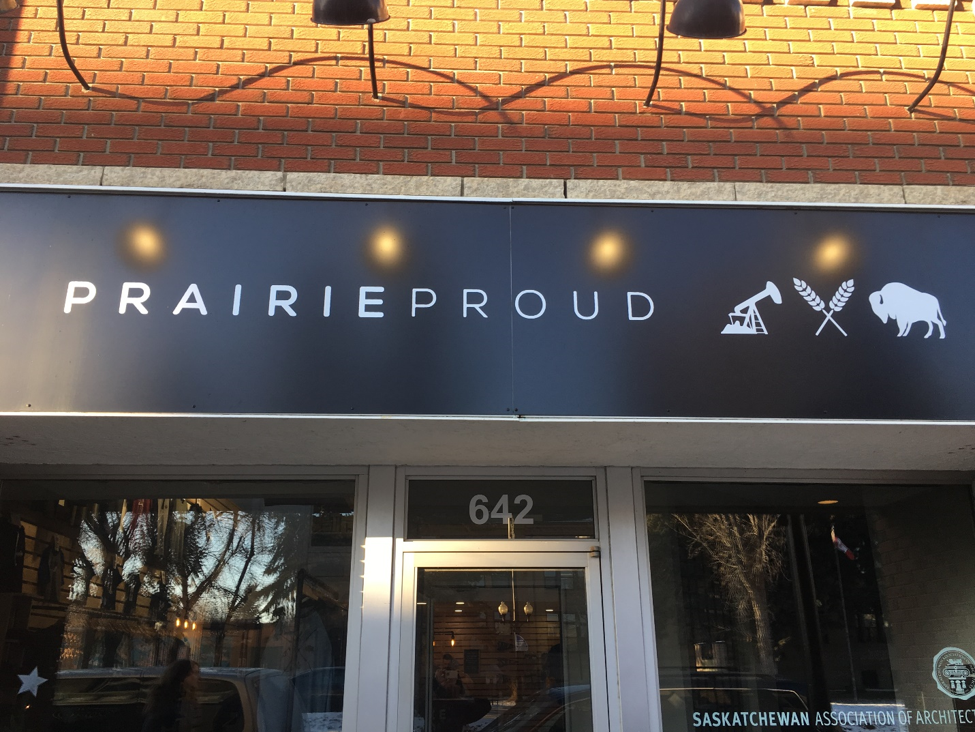 The marquee above a local prairie-themed shop in Saskatoon; note the association of prairie pride with a pumpjack. Author’s photo.

This past autumn, Aatash Amir, a Vancouver man concerned about emissions caused by gas-powered leaf blowers, circulated an online petition to have them banned in his hometown of Saskatoon. Upon posting the petition to a local Facebook group, he quickly received a flood of hateful comments, ranging from racist remarks, threats of violence, and calls for Amir to commit suicide. Some people sent videos of themselves using leaf blowers on nothing, ridiculing his suggestion of banning the machines.

As a historian of nineteenth-century America who grew up and did much of my training in the Prairie West, I found the response Amir received disturbing but unfortunately unsurprising. In recent years I’ve observed Western Canada become increasingly hostile toward environmentalist criticism. In this realm, I’ve noticed growing parallels between pro-oil, anti-environmentalist rhetoric in Western Canada and the argumentative strategies of another group closer to my own area of research—pro-slavery and anti-abolitionist agitators of the antebellum American South.

It is not my intention to suggest similarity between the oil industry and the slaveholding South generally; doing so would serve to diminish the cruelty and violence that was part and parcel of the commodification and ownership of human beings. These systems are markedly different from one another, but their supporters do share one key similarity. In both cases, these groups faced or are facing criticism that a vital source of their region’s wealth, social structure, and sense of identity is immoral and must be phased out. In turn, the petroleum sector’s defenders have adopted a similar response to this criticism. Like antebellum defenders of slavery, many Westerners have adopted an uncompromising strategy of redoubling their defence of the oil industry and seeking to harshly censure any criticism of it from within and without. With this unwillingness to change, Westerners—like Southerners—have adopted three main rhetorical strategies: a positive defence of their industry, an intolerance of criticism, and threats of secession.

In the antebellum era, Southerners underwent a transition from a begrudging acknowledgement that slavery was morally wrong (though they still proved unwilling to abolish it) to articulating a bold reversal that slaveholding was actually a moral good. In the most famous example of this argument, proslavery advocate John C. Calhoun argued in 1837 that slavery was “instead of an evil, a good-a positive good.” Calhoun and his acolytes contended that slavery was a superior system of social relations to free labor for both masters and enslaved people. The positive good defence of slavery became a vital tenet of proslavery rhetoric, enabling slaveholders and their allies to lay claim to a moral high ground over supporters of the free-labor economy dominant in Northern states.

Defenders of Canada’s oil industry are employing a similar rhetorical strategy, though couching it in different lingo. Pro-petroleum boosters lean more on the rhetoric of “pride” than “positive good,” but the core argument and its rhetorical purpose is basically the same. “Enough is enough. No more apologies. We are proud of Alberta and Canada’s oil and gas,” tweeted Alberta premier Jason Kenney in August 2019.

To some degree, the pride argument is economic; Kenney has previously suggested that wind and solar-based electricity is less affordable for Albertans than coal-powered energy, implying a dim view of the economics of renewable power in general. But in many cases and for many Westerners who have few direct economic ties to the oil industry, the pride message serves more as a rallying cry for regional unity in opposition to climate activists’ criticism, whose work threatens to undercut their region’s general prosperity and a key site of their Western identity. In a 2019 interview with a pro-oil industry publication, Saskatchewan premier Scott Moe declared that Western Canadian oil and gas is “a product that we should be proud of, and we should talk about it.”

Meanwhile, popular conservative Facebook groups like “Alberta Proud” and “Saskatchewan Proud,” though not unique to the Prairies, take particular interest in pro-pipeline news. And if one stops by “Oil Sands Action,” a page with over 230,000 likes, one will find numerous posts with messages like one from November 2019 that declared “We should be proud of our people, our record and our resources. We <3 Canadian energy!” Language of this sort portrays support for oil as a regionally and even nationally patriotic act. “Pride” has become an increasingly important trope in conservative rhetoric generally, and it has become particularly important as a defence of the petroleum industry. As with Southern slaveholders, it has enabled Westerners to move from a defensive argument to an offensive one that argumentatively places themselves morally above their opposition.

The positive defence of slavery worked in tandem with a system that harshly censured criticism of the institution. In 1835, the American Anti-Slavery Society attempted to mail abolitionist literature to Southern audiences; in Charleston, a mob broke into the post office, stole the antislavery tracts, and burned them. Subsequently, the U.S. postal service refused to deliver antislavery mail to the South. Additionally, Southern frustration that Congress heard and debated abolitionist petitions in 1836 led to a “gag rule” barring Congress from hearing them. 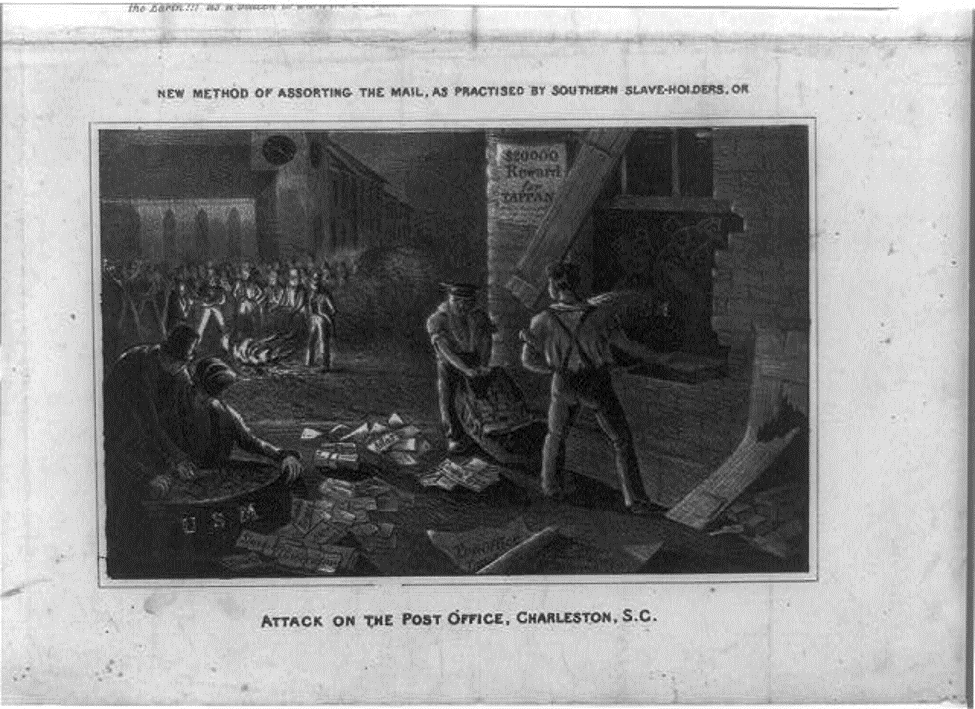 “New Method of Assorting the Mail, as Practised by Southern Slave-holders, or Attack on the Post Office, Charleston, S.C.” 1835. Library of Congress Prints and Photographs Division, LC-USZ62-92283.

Proslavery Southerners also restricted antislavery speech through more informal means. On rare occasions when abolitionists in the South made their views known publicly, proslavery actors perpetrated violence against them and forced them to leave town. The North was not immune to violence against antislavery voices, but Southerners took particular umbrage with perceived slights against slaveholding—silencing critics or, when that wasn’t possible, painting them as radicals dangerous to the social order.

Similarly, defenders of oil in the Prairie West increasingly seek to delegitimize and even punish environmentalist critiques. In the halls of government, Western pro-oil leaders frequently argue that environmentalists are political deviants and radical disturbers of the peace. Jason Kenney’s new energy war room is intended to combat what Kenney claims are foreign-funded liars, and he refused to attend September’s day of climate change protests because he believed that many of the activists represented “the radical left.” Meanwhile, the case of Aatash Amir is but one example of the vitriol levied against environmentalists in Western Canada through more informal channels. More recently, a Saskatchewan school division was forced to apologize after its Christmas concert—titled “Santa Goes Green”—was deemed anti-oil by community members. Nor are these always just words; this past summer, environmentalist Tzeporah Berman was assaulted in Edmonton by an individual angry with her anti-oil sands politics. While these are high-profile examples, my own experiences online suggest that smaller-scale examples of this vitriolic turn and intolerance for criticism of the oil industry are happening every day in comment sections and Twitter feeds. While not as explicit or complete as the South’s mail embargo and gag rule, the involvement of high-level politicians and the attempts to delegitimize protestors’ voices highlight the similarities between these argumentative strategies.

Perhaps the most obvious rhetorical parallel between the slaveholding South and the oil-extracting West is the threat of secession. In the decades prior to the secession crisis of 1860-61, Southern states threatened disunion to extract political concessions. Contrary to the misconception that the Civil War was fought over states’ rights, the antebellum South often demanded that the federal government take heavy-handed action to bolster slaveholding—whether through seizure of western territory, or through stronger fugitive slavecatching laws that obligated Northern states to comply with enforcing slavery. Sometimes demanding forceful government action and sometimes demanding respect for state sovereignty, the antebellum South consistently stood for slavery—and held leaving the United States as its final trump card if the federal government didn’t support them.

Western separation similarly threatens the federal government into acting in contradictory ways in support of oil. Sometimes, Moe and Kenney support strong central government that can override British Columbians’ and Quebeckers’ hesitancy about pipelines. At other times, they bemoan a federal government that has overridden provincial rights with carbon taxes and equalization payments. And like Southern slaveholders, Western secessionists’ discussion of provincial grievances only extend to those in their region who benefit from the staple economy; regions (like BC) and people (like Indigenous nations) who don’t fit the model are conveniently not discussed. Though prominent political leaders haven’t called for Western separatism outright, they seem pleased to wink at supporters who do so on their behalf. Ultimately Western separatism is being used as a rhetorical tool to extract concessions, and further riling up a frustrated base of Prairie conservatives.

While I am not suggesting that history is repeating itself or that the slave and petroleum economies are broadly the same—as the overt violence of slavery must be kept front of mind when considering the institution—the parallels between the rhetoric of the proslavery South and that of the the pro-oil West are troubling. Ultimately, both approaches reflect an effort to prolong their industry’s survival by sidestepping substantive engagement with the idea that its economic engine is excessively and therefore immorally exploitative, either of humans or the environment. In both cases, this rhetorical response is partly born out of a desire to continue to accumulate wealth through the current system, but also encompasses many who don’t personally make their living through this system. To understand this, Canadian historians might find useful elements of the extended historiographical discussion on why non-slaveholding white Southerners also ardently supported the institution.

In the context of Western conservative backlash to the Liberal Party’s 2019 reelection, this issue seems to be escalating further. Recognizing and studying this antebellum American precursor will, I hope, help us as historians to better determine how to deescalate the pro-petroleum West’s rhetoric and in so doing help it recognize the need to move toward a renewable energy economy.

Louis Reed-Wood is a doctoral student at the University of Toronto. He researches the history of media and communication in nineteenth-century America.

2 thoughts on “Half Oil and Half Green: The Southern Roots of the Prairie West’s Anti-Environmental Rhetoric”