Sherry Farrell Racette in Looking for Stories and Unbroken Threads notes, “Through the power of colour and design, the objects in museum collections not only speak a powerful aesthetic, they also reveal critical information about the worlds and circumstances in which they were created.” Textiles have a role in telling community and personal histories and can tell stories that aren’t evident in other historical records. In some cases, a piece of embroidery might be the only record of a life lived.

How many of these women thought their embroidery would end up in a museum? As I have learned to embroider I have become interested in how historians and heritage professionals use embroidery to talk about the past. What can embroidery tell us about individual lives, communities, and history?

In this post I’m going to highlight a few of my favourite embroidery samplers that are held by museums, and talk about their connections to personal and larger histories. Created by young women as they learned to sew and embroider, samplers were used to demonstrate proficiency in needlework. They are particularly remarkable not only because they often include dates and the names of the maker, but are some of the only documents produced by young women from the nineteenth century. Samplers were also created for personal reference, almost like a ‘sample’ of stitches and patterns that could be recreated later in other projects. 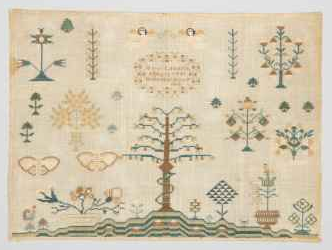 The above sampler is held by the Textile Museum of Canada and was stitched by Mary Lacasse at age 12 in Montreal. It is dated May 8, 1818. Other than Mary’s name on the sampler there is no other information in the catalogue record about Mary. However, the stitched date and name of Mary Lacasse suggest that this piece was likely an educational sampler, perhaps one that Mary completed in the course of her schooling. Embroidery was often taught to middle and upper class women as a way to emphasize feminie virtues such as patience, quietness, neatness, and conformity. This sampler showcases a range of patterns and stitches, with a floral and tree theme. The top of the sampler includes two angels and the apple tree with a Snake around it is referencing the Tree of Knowledge in the Garden of Eden. These religious motifs connect Mary to the Catholic education that was prominent in Quebec in the 1800s. I still don’t know much about Mary, but by exploring her embroidery I’m pulling at the edges of her existence and connecting her work to larger social movements. 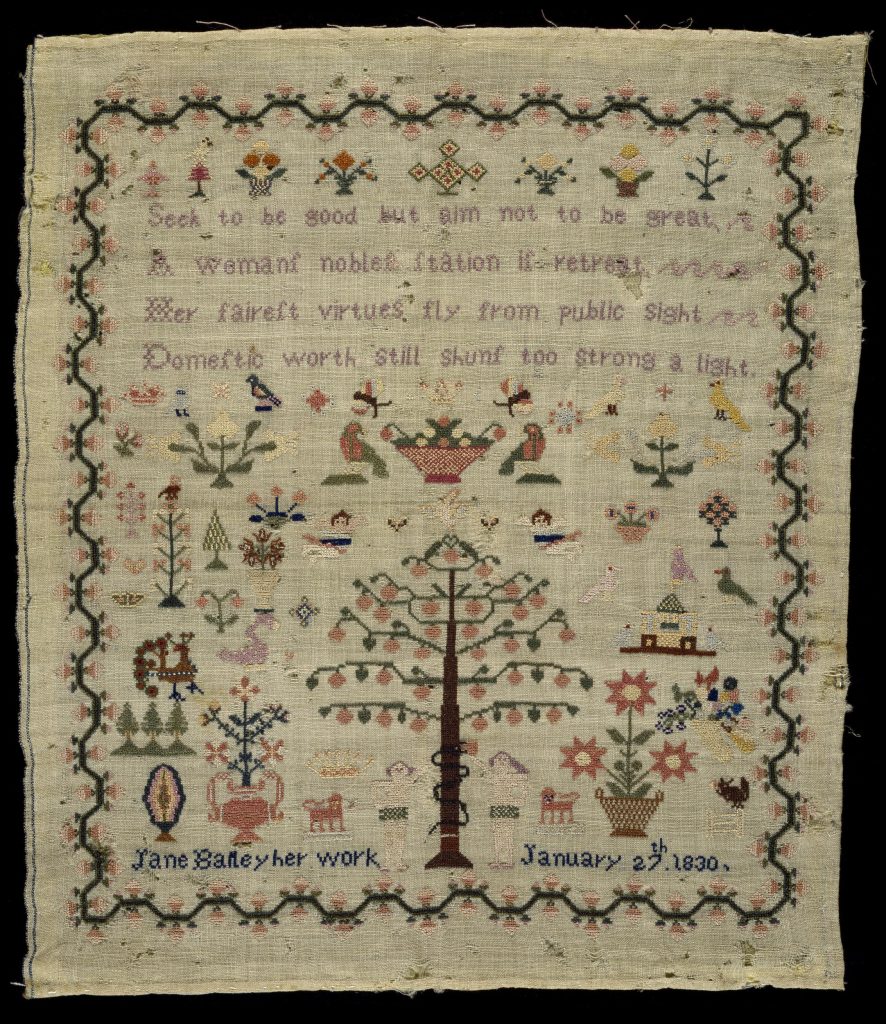 The second sampler is from the Victoria and Albert Museum, which holds a collection of over 700 embroidery pieces from the 1400s onward. It was created by Jane Bailey in England in 1830. I picked this Sampler because of its similarity to the one by Mary Lacasse. Like Lacasse’s sampler, Bailey’s work also contains the Tree of Knowledge and has comparable smaller florals. The similar motifs between samplers created in Montreal and in England show the exchange of embroidery traditions across time and place, connecting women’s work and education across borders. We know that Lacasse’s work was done at age 12 but it isn’t clear how old Bailey was when she completed her sampler. However, given the prominence of embroidery as part of education for young women in the 1800s it is likely Bailey was a youth when completing this piece.

Bailey’s sampler also reinforces embroidery’s role in teaching femininity by including a verse about women’s virtues, reading “Seek to be good but aim not to be great, A womans noble station is retreat, Her fairest virtues fly from public sight, Domestic worth still shuns too strong a light.” 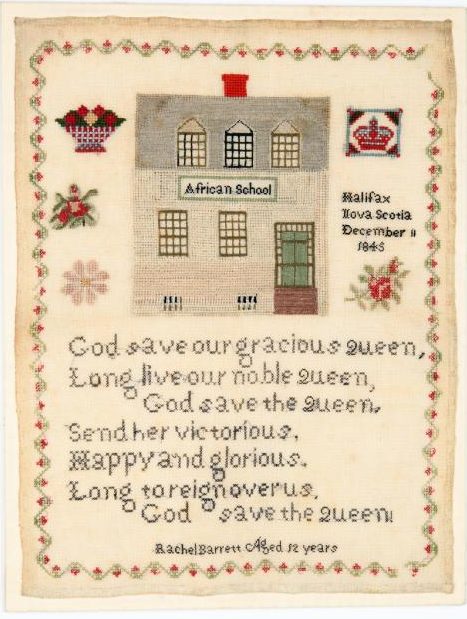 The last sampler is strikingly different from the work of Lacasse and Bailey. This one was created in 1845 by Rachel Barrett in Halifax, Nova Scotia and is believed to have been completed at the African School in Halifax.

The sampler includes a stitched version of the School and verses of God Save the Queen. Lisa Bower of the Nova Scotia Museum has noted that “as early as 1836, the anthem had been sung during a public examination at the school, in honour of Emancipation, and that in 1837, wool was being purchased for needlework instruction.” This sampler speaks to what female students were being taught at the Halifax African School in the 1840s and shows a connection to moral and religious instruction.

There is also a lot of colour variation in the piece. For example, one upper window is a different colour than the rest. This might speak to the lack of resources for embroidery at the school. There are very few traditional samplers from schools for black children in museum and archival collections today, making this sampler important for its rarity and ability to speak to this type of domestic education and the use of education to assimilate Black children into white culture. Barrett was 12 years old when she stitched this piece, the same age as Lacasse when she created her sampler. The similarity in age shows again how the domestication of embroidery stretched across distance and types of female education.

These three embroidery samplers were all made by young women in the 1800s. They have similarities in form and style, but all provide a glimpse of individual history and personality. They were stitched by individuals. The stitches are imperfect and show the hand of their maker. I know very little about their lives other than what they embroidered. However, someone might be able to connect more dots through local history and genealogy research, further shining light on the lives of these women.

Krista McCracken lives and works on Robinson-Huron treaty territory, in the traditional homeland of the Anishinaabe and Métis peoples. Krista is a Researcher/Curator at the Shingwauk Residential Schools Centre and an editor of Activehistory.ca. They are an avid embroider.

2 thoughts on “Stitching History: Using Embroidery to Examine the Past”