Who would have thought that almost exactly one hundred years after the Spanish Flu closed schools, churches, and other public gatherings around the world, that we would once again find ourselves in similar circumstances? 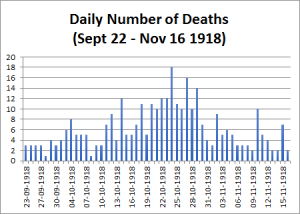 The Spanish Flu hit Canada in the fall of 1918 and, after an initial scare, persisted for nearly two years. Unlike the current pandemic, it was the young and healthy that it hit the hardest. In the end, about 50,000 Canadians, and over 20 million people worldwide, died. 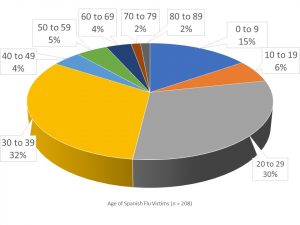 From a more positive perspective, one of its most significant and lasting impacts, was the beginning of the federal Department of Health, and a consciousness about public health that – I think – continues to serve us well today.

As many of us find ourselves working from home, and teaching online, I want to use today’s post to share a replicable assignment I used last year to engage students with the history of the Flu and how to use primary sources to study the past.

Building on a partnership that Huron’s Community History Centre and Centre for Undergraduate Research Learning developed with Defining Moments Canada, an organization who, a few years ago, challenged history teachers and professors to focus on the Flu, we asked students to read through one week of London’s Free Press and Advertiser as well as the Ontario Death Registers for London and Middlesex County.

The purpose of the assignment was to learn something about postwar Canada and the Flu by comparing how London’s conservative and liberal newspapers (The Free Press and Advertiser, respectively) reported on this event within the context established by the more statistically oriented death registers. Each student was assigned to study a different week at the peak of the Flu’s arrival during the autumn of 1918. Once complete, the students worked together, sharing their research, to create an interpretive panel (below) to teach the public about the Flu’s impact in London.

The idea for the project was inspired by our partner, Neil Orford, who, before starting Defining Moments Canada, began the Digital Historian Project in the Upper Grand District School Board. The Digital Historian Project was hosted at the Dufferin County Museum and Archives and used primary sources to teach both high school history and math. Though I did not focus too much on the statistical side of things, Neil’s project was a good reminder that we need to train our students in using vital statistics and other similar types of quantitative sources.

From my perspective as the professor, the assignment was a huge success.

Not only did it teach us about the impact of the Flu, and daily life in wartime London, but it also engaged the students in more meaningful discussion about the challenges involved in studying the past. Because each student studied a different week as the Flu began to affect daily life in London, students compared notes with each other about what was happening over the whole period of study; they also began to ask important questions about their sources. One student, for example, began to wonder about the time of day in which each paper was published, and whether they circulated in the morning or afternoon. Collectively, the students traced how businesses framed their advertising around the crisis, as well as following stories that continued over the weeks of the crisis. On both fronts, they took a more critical approach to their source material than I have seen in more traditional primary source analysis assignments that focus solely on one type of document. 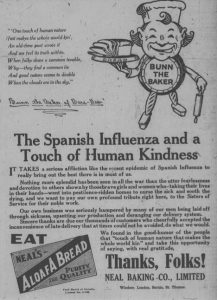 What’s more, this type of assignment is replicable. Because the Free Press and Advertiser have not been digitized for the Spanish Flu years, my students had to use microfilm copies held at our university library; many newspapers from the period, though, are freely available online. Somebody could replicate this in assignment in Toronto, or with a more national focus, using digitized newspapers such as the Toronto Star and the Globe and Mail.

Likewise, organizations like the Church of Latter-Day Saints, through their Family Search portal, have made historical vital statistics, like the Ontario death records we used, broadly available without cost (though you do need to register).

This assignment structure also lends itself to other historical subjects that can be encapsulated within a limited time frame. Defining Moments Canada, for example, has begun to transition away from the Flu and towards the 1921 discovery of insulin. Though the nature of the assignment will change, a similar opportunity presents itself for engaging with newspaper sources and their coverage of Banting and Best’s discovery. The Boer War, Great Depression and moments in the Cold War, hold similar promise.

In sum, as we continue to practice social distancing over the coming weeks, projects like this one hold some promise for how we might use our present moment to teach about the past.

Thomas Peace is an assistant professor of Canadian History at Huron University College. Most of the work conducted on the history of the Spanish Flu in London was conducted by the students enrolled in HIS 2204G: Crises and Confederation during the 2018-19 Winter Semester.