Through the lens of Allooloo’s family story, the poster (which is based on a photo of Allooloo’s grandparents) looks at the history of Inuit relocation. Between the 1920s and 1960s, Canadian officials relocated Inuit families to the high arctic as a means to establish an RCMP presence and protect Canada’s sovereignty against foreign interests. It is a difficult history but, as Allooloo argues in the poster’s essay, it is also a story of Inuit resilience.

We Are Inuit – Not Your Flag Poles

This image is based on an archival photo of my family, taken in 1922, when they were relocated to Craig Harbour as part of Canada’s original Arctic Sovereignty effort. They were transported from Pond Inlet (Mittimatalik) aboard the CGS Arctic – one of Canada’s first Arctic patrol ships. The Arctic was captained by Joseph-Elzéar Bernier, the French-Canadian explorer who officially claimed all of the islands up to the North Pole for Canada in 1909, and who also established the Royal Canadian Mounted Police (RCMP) in the Canadian North. 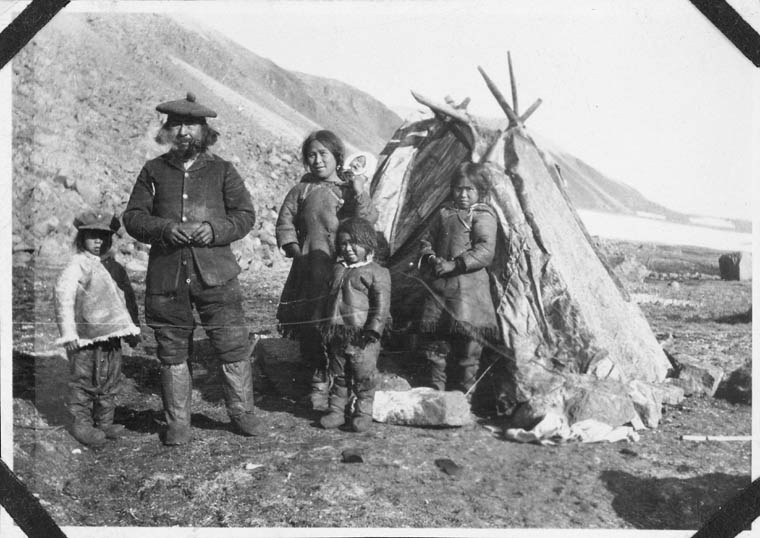 My great-grandfather, Qattuuq, was made “an employed native” (later retitled Special Constable) for the RCMP (known then as the Royal North-West Mounted Police). He, his wife Ulaayuk, and their 4 children (including my grandmother, Ukpigjuuya – pictured far right) were relocated to establish an RCMP presence on Ellesmere Island. Finding Inuit who were willing and able to survive in this uninhabited region of the high Arctic proved extremely difficult, and my great-grandparents were the only ones colonial officials could recruit for this expedition. According to historian Lyle Dick, “During their tenure both [Qattuuq] and [Ulaayuk] performed essential labour for the detachment. [Qattuuq] hunted to provide the detachment sledge dogs with food and accompanied all its patrols designed to assert sovereignty over the region. [Ulaayuk] sewed all the detachment’s skin clothing for these excursions and commenced these duties even on the ship en route to Ellesmere Island.”

Qattuuq and Ulaayuq were dropped off and told that the ship would return in a year to bring them supplies or take them home. But the ship never came. They spent a year in complete isolation, in a place far colder than back home and where food was very scarce. They lost their two younger children that year.

Eventually they packed up what was left of their family and travelled back to Mittimatalik. My older brother and dad say they traveled by dogteam and that it took them a whole winter. But in my research for this project I read that they “boarded the Arctic to return to their home after only one year” (Dick 2001). However, Dick also quoted the officer in charge at Craig Harbour, Inspector Wilcox, as stating “one year after they were dropped off that the Inuit from Pond Inlet ‘were perfectly satisfied with their treatment at Craig Harbour and very pleased to have been fortunate enough to spend the winter with us.’” After what they endured in that year, I cannot imagine this to be true.

The Canadian government used my family as human flag poles to assert their sovereignty in the Arctic against foreign interests. A practice they would repeat in the decades that followed, which came to be known as High Arctic Relocations. This colonial project would never have been possible without Inuit like my family. The RCMP were absolutely dependent on the generosity, fortitude, expertise, and skill of Inuit to survive in our homeland and to establish their northernmost detachments.

In return, the RCMP left them stranded on an uninhabited island. My grandmother, whose expression in all of the photos on that expedition is of utter mistrust, would grow up to witness the RCMP enforce additional relocations of Inuit families in the 1950s and the forcible removal of Inuit children – including her own children – to residential schools. Hundreds of Inuit children from the Baffin region were transported by ship to the South, where they were assimilated, abused, starved, experimented on, and if lucky, able to return home after several years.

Very few are aware of this part of Canada’s history or the various means of treachery deployed throughout the founding of this country – which is invested as much in the erasure of our experience as it is dependent on our presence. Canada has always needed us and erased us, to forge its image of itself.

I wish to relocate the burden of this atrocity to its rightful place: with Canadians. These are your roots. This is your history. This is one way in which you have come to occupy these lands. The deplorable social and living conditions inflicted upon Inuit (and Indigenous communities nation-wide) stem directly from Canada’s settler colonialism. May our oral histories and lived experience be in dialogue with your versions of nation-building to remedy these ongoing systemic injustices.

To my family: I honour your resilience and that you were able to make it home – not as flag poles, but as Inuit. 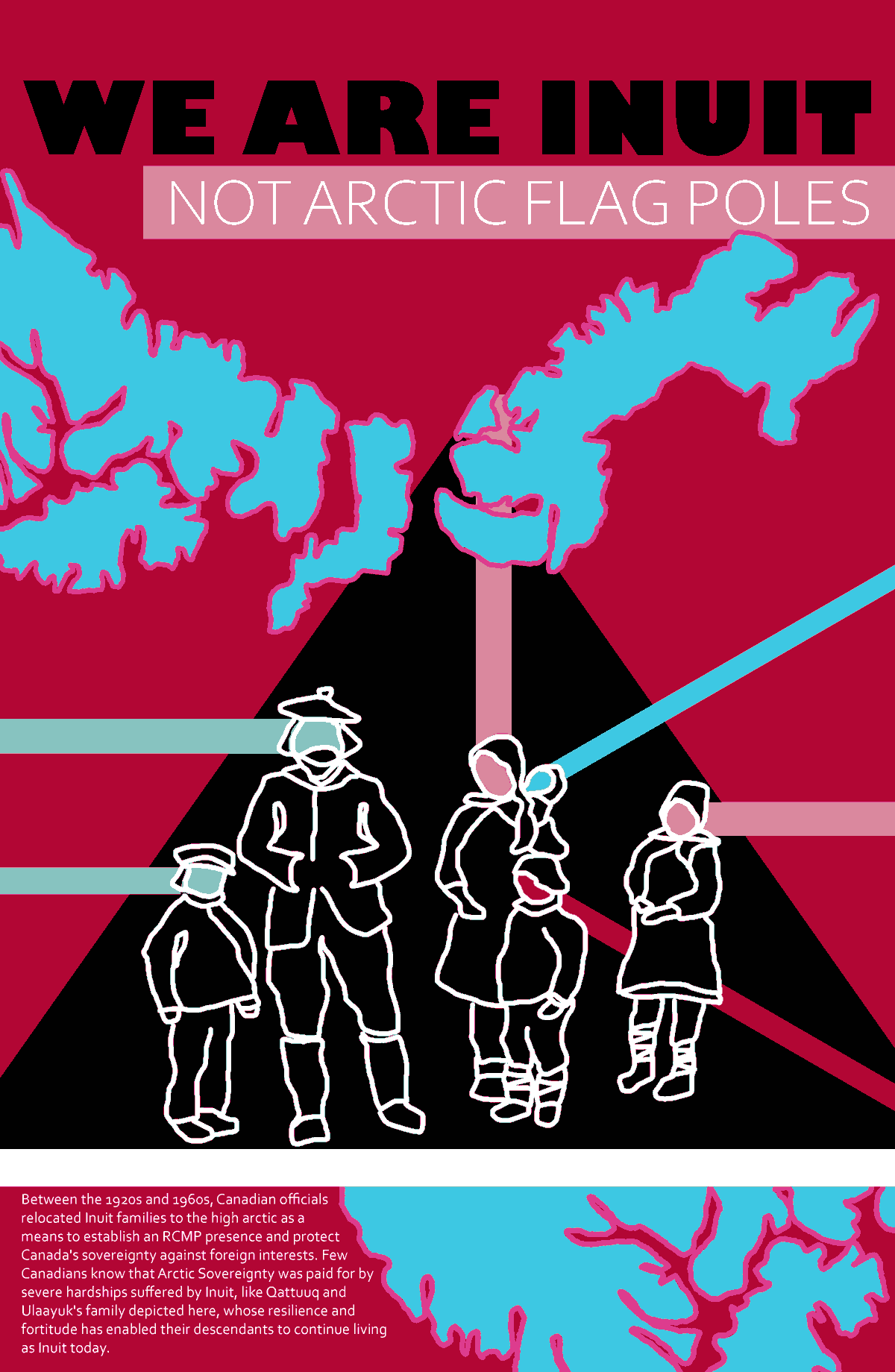 [Image Description: This poster depicts writer Siku Allooloo’s family based on an archival photo taken in 1922. The family is depicted in white lines on a black background with different colours radiating from their heads. The background of the poster is red with the outline of some islands of the high arctic in pink and blue. Along the top it says, “We Are Inuit Not Artic Flag Poles,” and along the bottom it says: “Between the 1920s and 1960s, Canadian officials relocated Inuit families to the high arctic as a means to establish an RCMP presence and protect Canada’s sovereignty against foreign interests. Few Canadians know that Arctic Sovereignty was paid for by severe hardships suffered by Inuit, like Qattuuq and Ulaayuk’s family depicted here, whose resilience and fortitude has enabled their descendants to continue living as Inuit today.”]

Siku Allooloo is an Inuk/Haitian/Taíno writer, artist and community builder from Denendeh (NWT) and Pond Inlet, NU. She has been leading resurgence and decolonial work since 2012 through both community/land-based programs and the arts, including creative non-fiction, poetry, and multimedia.

Lianne Marie Leda Charlie is a descendant of the Tagé Cho Hudän (Big River People), Northern Tutchone speaking people of the Yukon. She is an artist, mother, and faculty member in the Indigenous Governance Program at Yukon College. You can find more of her artwork on Instagram: https://www.instagram.com/littlesalmonwoman/.