For a historian of pandemic influenza these are uncanny days. The past is colliding with the present. As if a thread has emerged, now, connecting us with those who faced, in their own ways, a globally shared experience in 1918-1919. 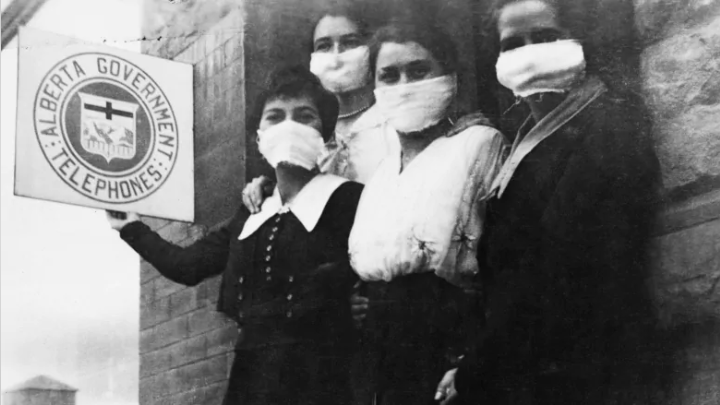 A group of nurses in High River, Alberta, wear face masks in an attempt to ward off the Spanish Flu, October 1919. Glenbow Archives 3452-2.

I’ve been honoured to hear the stories families nurtured and kept alive about the 1918-1919 flu, stories of their people, how they persisted, and how their lives were changed by a disease outbreak that killed over 50,000 Canadians, and 50 million globally. For much of the twentieth century, history did not much care about the stories of their lives. So much so that influenza’s history did not really disrupt the trendline of modernity, or the progressive narrative of modern medicine. This despite the fact that doctors, nurses and public health officers who fought the flu honestly revealed their agony and sense of failure at the time. “There is no question of keeping the wolf out of the sheepfold,” a British medical officer of health said after the pandemic had passed. That was both a rallying cry and a statement of heartbreak.

This is like living in the middle of a story you have read already, while hoping for a better ending. It unfolds in a chilling way but there are no surprises. What is familiar? The courage of health care providers, and the capacity to put the needs of others first. The enormous demands placed upon them, and the risks they take every day. The recent stories of family spending days in homes with dead loved ones. The suggestion of mass graves. In 1918-1919, the boundary between dead and living was permeated, and for some that doorway never closed; their lives were peopled by spirits and ghosts.

But this isn’t about history repeating itself. After all, it is not too late for us to prevent 50 million deaths. History doesn’t determine us. But the society in which we live today might. The social fault lines that emerged during the 1918-1919 pandemic were deep, and largely unacknowledged in public discourses at the time. Nonetheless, there was no single influenza experience. There was the dominant image of flu as a democratic disease to which everyone was equally susceptible, and then there was a divided set of realities that reflected underlying social inequities. Indigenous people had death rates many times that of non-Indigenous Canadians, and some communities were almost wiped out: another event in a long, intertwined relationship between colonialism and disease. Urban working-class people who had limited access to care died not just by being infected, but from the inequality written on their bodies, fighting the virus in overcrowded and poorly ventilated housing, choosing to work or starve, without savings to cope with loss of income or to bury the dead. Young single labourers. Poor farmers who became sick and could not beat secondary infections after they went back out into their fields and barns too soon.

Although media coverage and public health messaging today suggest we are all at risk for Covid-19, we are not equally at risk. This is not one pandemic, it is a myriad of stories that will eventually make it clear that we are not all in the same boat. A key question that will shape how the history of Covid-19 is written by historians is if, and how, our governments and we ourselves choose to respond to this.

Will we view Covid-19 as a threat to the social, not just the individual, body? “Social distancing” makes good sense from a public health perspective, but to a historian’s ears it sounds like a metaphor for a deeper problem. In Winnipeg in 1918, there was a mobilization of resources by community to help ensure that victims and their families did not go without food, clothes, clean bedding, or without access to supportive care. Volunteers, neighbours, ethnic organizations, unions, churches – many (especially women) played this role, distributing food, answering calls for help, fundraising, giving money to families who needed it, helping them bury their dead with dignity. There was limited scapegoating. This was not enough to prevent suffering, but it was something.

As Rebecca Solnit has argued about the possibility for solidarity arising from disasters, pandemic histories are potentially hopeful ones. They are narratives about human agency and choice, as much as they are about microbes.

As the failures of government responses to the pandemic were exposed in 1918-1919, a heightened awareness of bodily inequality, together with mutual reliance, formed the basis of demands for something better: for a health system that was not built on inequality. By the 1920s, and intensifying through the economic and ecological disasters of the 1930s, voices for socialized medicine became more and more persuasive. The first socialized health programs in Canada, enacted by the Saskatchewan CCF in 1944-45, arose from the agency of a generation that remembered two world wars and a global pandemic. Somehow, they imagined themselves not at the end of the world, alone on its edge, but living in a better future.

Esyllt W. Jones is a Professor of History and a part-time member of the Community Health Sciences Department, Faculty of Medicine, University of Manitoba, and the Dean of Studies at St John’s College. She is the author of Influenza 1918: Disease, Death and Struggle in Winnipeg, and an editor with Magda Fahrni of Epidemic Encounters: Influenza, Society and Culture in Canada, 1918-1920. Her most recent book, Radical Medicine,  focuses on the history of socialized health care in Canada.

One thought on “The Distance Between Us: The Implications of Pandemic Influenza in 1918-1919”