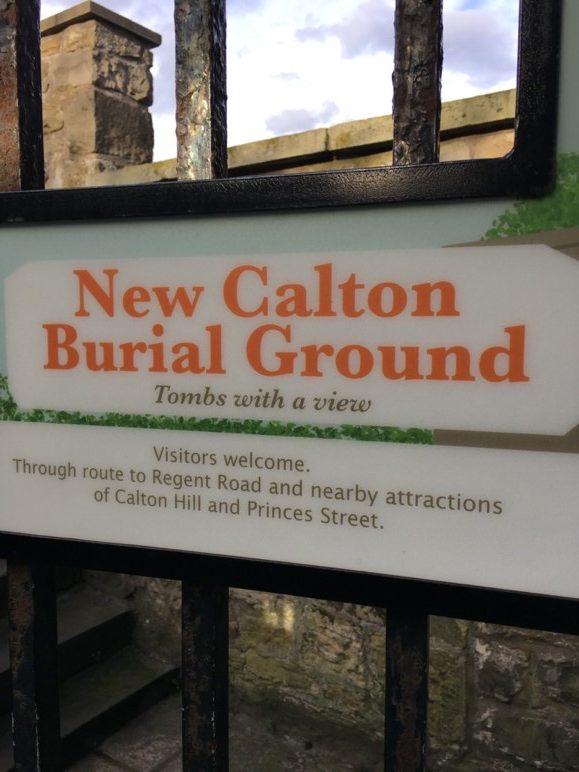 As I entered Edinburgh’s New Calton Burial Ground in the fall of 2018, I was struck by the placard on the front gate advertising ‘tombs with a view’ – the view from the cemetery’s perch on Calton Hill really was spectacular. I was visiting the site as part of my dissertation research on the families formed by Indigenous women and their British husbands, who worked as officers with the Hudson’s Bay Company (HBC) in the early nineteenth century.

New Calton Burial Ground certainly delivered on its advertised ‘tombs with a view’, but my visit also left me thinking that gravestones and memorial stones give us a view (or views) on family relationships, power dynamics, mobility, and material circumstances. Like other examples of material culture, people construct meaning from these objects, and these meanings change across time and context.  The subtleties of family relations are read differently by mourners and friends, distant descendants, artists, tourists, archaeologists, or historians. 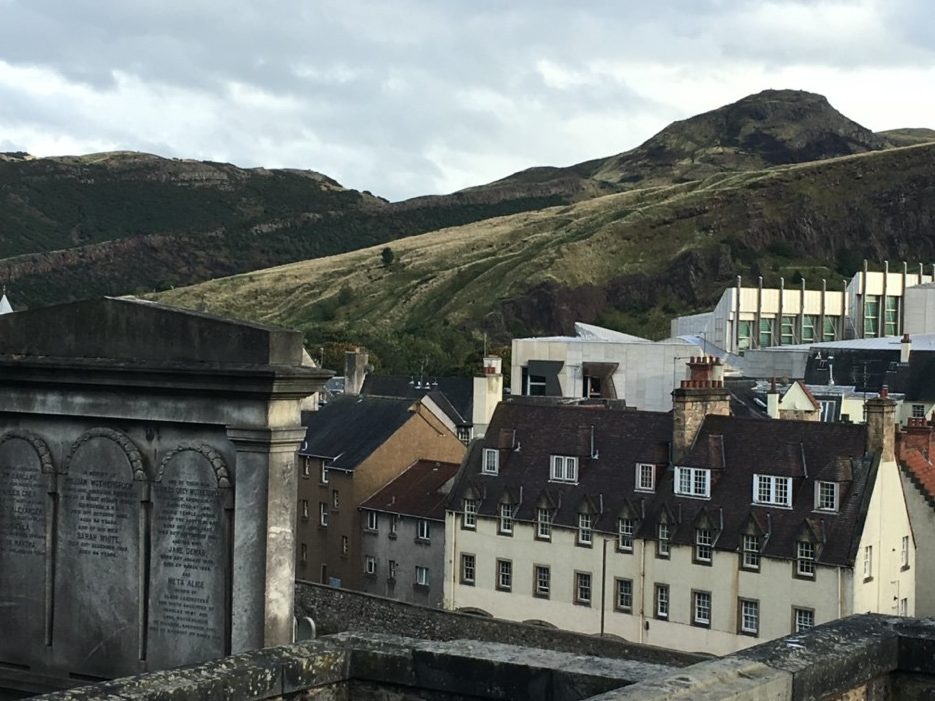 I visited the cemetery looking for the grave of Sarah McLeod Ballenden, a 33-year old woman of Indigenous and Scottish heritage who was born in what became Canada and died in Edinburgh in 1853. Rather than the individual gravestone I expected, Sarah’s grave was marked by a large family memorial stone that included the names of her husband (retired HBC officer John Ballenden), four of their children, and several Ballenden relatives.

Twelve members of the extended Ballenden family who died between 1817 and 1872 in Canada and Scotland are commemorated on this stone. Most of these relatives were either born in Indigenous territories claimed by the HBC or spent their adult lives dependant on incomes from the HBC’s North American fur trade. From its perch on Calton Hill, this memorial stone demonstrates the transatlantic webs of connection that held British imperialism together in what became Canada. 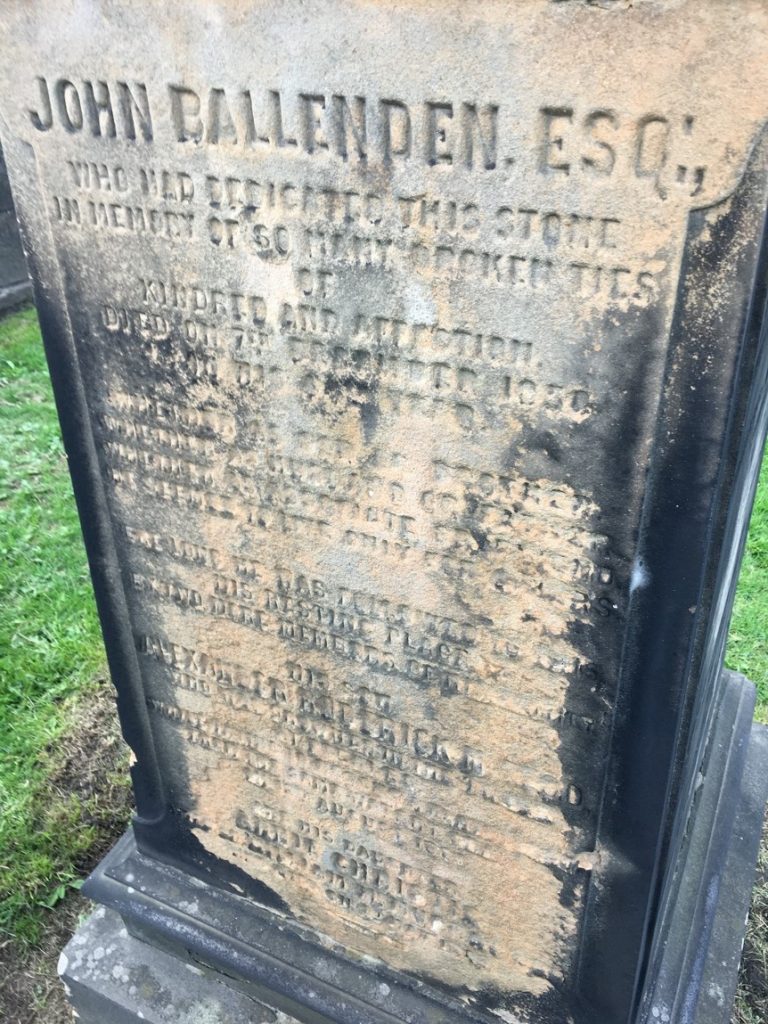 The Ballenden stone includes four generations of the family, but its coverage is uneven and incomplete. An infant nephew named John Ballenden Bannatyne who was born at the Red River Settlement (now Winnipeg) is memorialized on this stone and on another at Kildonan Presbyterian Cemetery in Winnipeg. However, four of John and Sarah McLeod Ballenden’s own children are missing from the stone entirely.

When retired HBC officer John Ballenden commissioned this stone, he created a particular representation of his extended family. Ballenden is named in two separate inscriptions, one of which reads:

JOHN BALLENDEN, ESQ.
who had dedicated this stone
in memory of so many broken ties
of
kindred and affection…

By installing this stone, Ballenden demonstrated his financial success and the importance he placed on his extended family. Perhaps he was trying to recast broken or strained ‘ties of kindred and affection’ by inscribing his relatives together in stone. However, Ballenden’s final vision for the stone may never have been realized. After his death, relatives with their own financial and familial concerns were responsible for adding inscriptions. 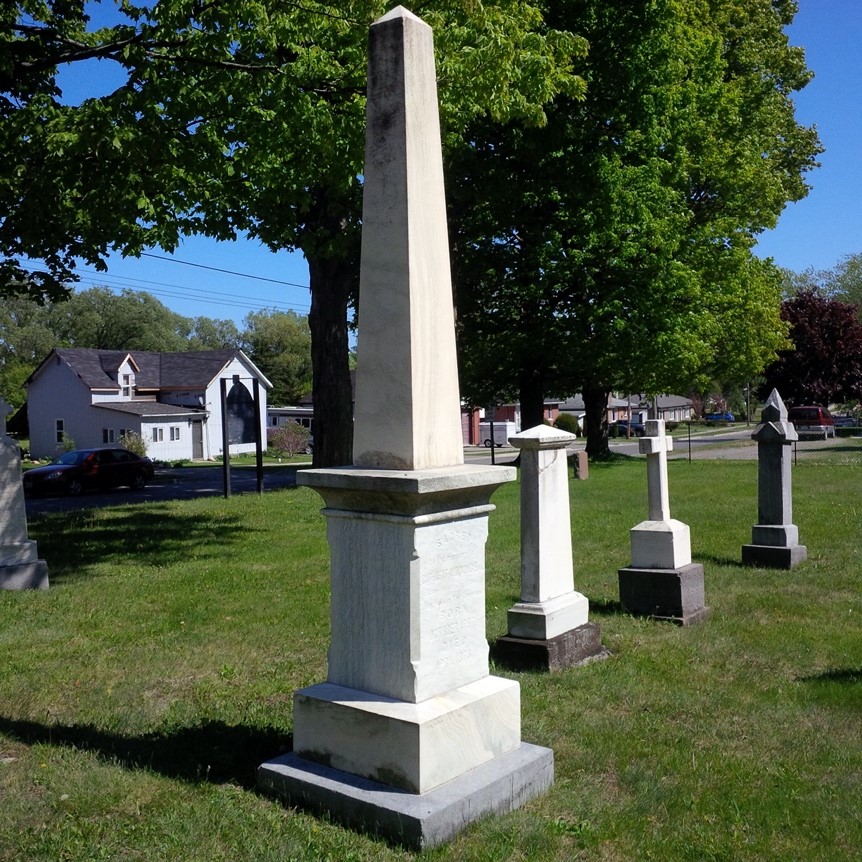 Yet, as a heritage professional and historian, I tended to think of gravestones and memorial stones in these terms – as primary sources that supplemented archival records. Cemeteries are often indexed to allow researchers to access this kind of raw data from a distance. As a researcher I was initially frustrated by the omissions, inconsistencies, and inaccuracies I found on memorial stones dedicated to nineteenth-century fur trade people in Canada and the United Kingdom. These inconsistencies encouraged me to engage more with the materiality of these objects, and the relationships they embody.

Memorial stones connect family members whose lives ranged widely across the British Empire. Like portraits painted by commissioned artists or staged by photographers, memorial stones are representations of how individuals wanted themselves or their relatives to be seen and remembered.

The final memorial stone was often impacted by practical concerns like finances, the priorities of the person selecting and paying for the plot and the stone, and the reliability of the transatlantic postal system for communicating information about the deaths of family members in distant places.[i] Memorial stones tell us much more as objects than they do simply as sources of genealogical information.

The HBC families I study were highly mobile, with friends and relatives scattered across North America, Britain, and the British Empire. For these families, and many others in the nineteenth century, memorial stones anchored distant family members to a single place with a permanence that did not exist in their daily lives.

Krista Barclay is a historian and Postdoctoral Fellow at the University of Toronto, currently teaching in the Canadian Studies program at University College. On Twitter @Krista_Barclay

[i] See Laura Ishiguro’s Nothing to Write Home About: British Family Correspondence and the Settler Colonial Everyday in British Columbia (Vancouver: UBC Press, 2019)  for more information on how the transatlantic post functioned in nineteenth-century North America.