As someone interested in the history of museums, I have thought for a long time about how we can use the objects in museums’ collections along with their archives to enrich our understanding of both. Recently I have been studying how ideas about art and the discipline of anthropology shaped the reception, display, and interpretation of Indigenous material culture in the late nineteenth century. At the height of the British Empire, British missionaries, anthropologists, and other collectors brought back and exhibited objects of the peoples whom they had conquered — peoples they defined as “primitive.”

Anthropology as a discipline emerged at this time, entangled with colonial power structures, and some anthropologists embraced and helped to popularize racist ideas of socio-cultural evolution. These legacies continue to haunt our relationships to Indigenous material culture. Understanding these relationships is part of the broader project of decolonizing museums, and Indigenous communities and scholars have made it clear that we need to be aware of the colonial context of the acquisition and display of these objects. The rightful ownership of Indigenous arts and historical artifacts is the subject of intense debate, particularly in the case of objects held by former colonial powers.

Alongside their original meanings and histories of acquisition, it is also important to show the ways that material culture acted within the cultures that collected it. Examining this question allows us to place museums and their collections in their own historical and cultural contexts and to remember that objects have meaning in British and European contexts, and not just in their cultures of origin. In thinking about Indigenous art and culture in this way, the objects themselves are vital, because they often give us clues to their histories of use and interpretation. When used in conjunction with museum archives, such objects can help us see some of the distortions that took place in the moment of their collecting and display, and how they functioned in their collectors’ culture.

To illustrate these ideas, let’s consider one particular Haida object, now in the collection of the Pitt-Rivers Museum in Oxford, England. 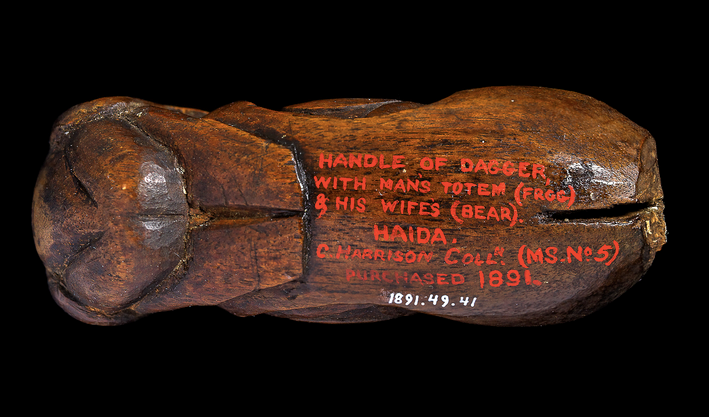 The first thing that we notice, looking at the bottom of the object, is the writing, in two different colors, with two different kinds of notation. The first is a description: “Handle of dagger, with man’s totem (frog), and his wife’s (bear). Haida. C. Harrison Colln. [Collection]. (MS. No. 5) Purchased 1891.” This appears to us to be a kind of transcription, and it gives the impression that the collector (the missionary Rev. Charles Harrison) had learned what the object represented from the people who made it, or that an expert on the culture is telling us what it is.

The writing has authority and authenticity from its placement on the object – its immediacy – as well as its use of an anthropological term (totem), of what appears to be local knowledge (dagger, frog, man, bear, wife), and of what appear to be references to the object itself (the two figures represented on it). The notation also seems like scientific documentation from its reference to a manuscript (MS. No. 5) and from its careful inclusion of the name of the makers (Haida) as well as the name of the purchaser and the date of acquisition.

The second set of writing, in white, appears to be a kind of code, and its placement below gives us the impression that it was put on after the first: “1891.49.41.” We recognize 1891 as the date of purchase, and we might recognize the typical system of designation in Victorian museums, with date of acquisition and numbers indicating the particular collection and specific object within that collection. Taken as a whole, the text seems to represent systems of scientific interpretation: anthropological terms and logical, bureaucratic management.

Perhaps little less notable was the frog’s head mask, which was an important “property” in the dances of the frog clan. The lower jaw of this was operated by the wearer, and a grating sound was produced which was believed to be like the croaking of a frog. The wearer of the Mask would carry in his hand the carved figure of a frog squatting on bear’s head, and this formed the handle of a dagger which was made of a piece of steel plundered long ages ago from a trading vessel. Its significance was to the effect that the man belonged to the frog totem and his wife to that of the bear.

In giving the object this interpretation, Harrison fit the object into a popular (but now discredited) theory of the late nineteenth century, totemism. Earlier in his book, Harrison explains that “In regard to the totem poles and crests a young man and a young woman of the same crest were not allowed to marry, as they were considered to be the same as brother and sister.” (p. 54) Harrison clearly put the Haida into the general theory of totemism as related to “savage races”: “Both clans and individuals were named after natural objects, as is often the case among savage races, and this has some connection with their totem groups. The totem system is general throughout the Haida tribe, and before each house was displayed the great totem pole bearing the owner’s crest.” (p. 67)

While anthropologists at the end of the nineteenth century debated the finer points of this theory, the basic idea was that all peoples had or were going through a “totem stage of development,” when they identified with particular animals as their ancestors, and that these identities served a social function because marriage outside of the totem clan prevented incest. Calling an object a “totem” in a museum display, then, linked that object with a whole set of ideas about “primitive” societies and their relationship to the natural world and to socio-cultural development. This term placed the object into a larger narrative about how societies and cultures “evolved” from primitive to modern. Europeans assumed themselves, with their industrial technology, to be the most “modern,” sophisticated, and advanced. The theory of totemism seems to have affected how Harrison viewed the object in the first place.

When thinking about the context of this object, it might be helpful to look at the object from a different angle, the angle that was arguably more important to the original makers. 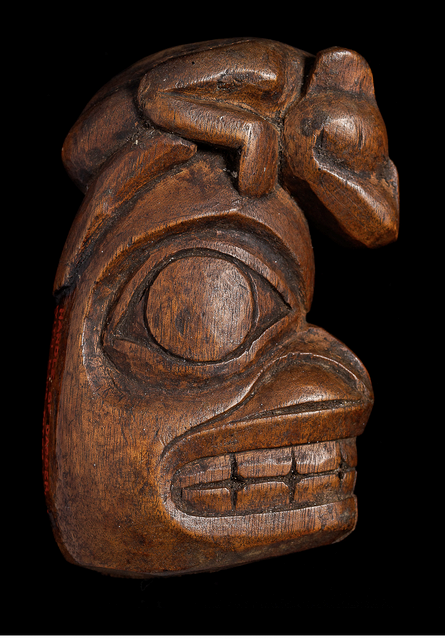 We see here what Harrison called the dagger handle, held in the hand during the dance, with the “frog” (the “man’s totem”) on top of the “bear” (the “wife’s totem”). But when the Pitt-Rivers Museum invited Haida researchers to come and study their objects in 2009, Haida artist Christian White viewed the figure on the top as a bear cub, and not as a frog. This new interpretation provided by White is now recorded in the museum’s online object record. This simple correction helps us see the ears on the top figure. The relationship of care between the figures, and their relative power and size, takes on a new meaning as well. Viewing this object without the nineteenth-century lens of totemism, and using White’s expertise in the culture of its makers, allows us to see the object very differently. At the same time, the object itself helps us see these layers of interpretation and helps us peel back those layers. The bear cub’s ears, and the tender relationship it has with the larger bear, sitting between its ears, reveal how the theory of totemism led Harrison to misinterpret the ceremony that he witnessed and the object that he brought away from this community.

Indeed, Harrison’s interpretation is fascinating, because it seems that he witnessed an entire ritual believing it to be about a marriage between people identifying with frogs and bears. Given that he saw someone wearing the frog mask, and carrying a bear dagger, this may have been about the relationship between clans. But his misreading of the object and his invocation of the theory of totemism calls his interpretation into question. This is where – in addition to and supported by engagement with the Indigenous communities of origin – I think studying material culture as both having a history and participating in that history can be so helpful.

By putting the object in its historical context, we can see how awkwardly its British collectors and curators were trying to fit it into a broader system of interpretation, and how distant that system might be from the intentions of its makers and users. This history tells us more about the needs and beliefs of its collectors than it does about its makers, and removing those layers of interpretation can us see them and the object more clearly.

Amy Woodson-Boulton is associate professor of British and Irish history and past Chair of the Department of History at Loyola Marymount University in Los Angeles, California. She has published on the history of art museums and the social role of art (e.g. Transformative Beauty, Stanford, 2012), and her current book project is tentatively titled Explaining Art: Anthropology, Authentic Culture, and the Search for Origins in the Age of Empire.

One thought on ““When is a Bear a Frog?” : Examining Material Culture Interpretation”